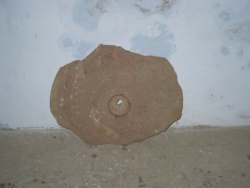 Gurdwara Chakki Sahib, at Eminabad is located where a large millstone was kept which was once used by Guru Nanak. In the Janamsakhis, it is mentioned that Guru Nanak Dev was taken as a prisoner along with thousands of his fellow countrymen by Babar's men.

Baba ji was, along with many of his fellow prisoners, forced to grind corn with hand-driven chakkis (millstones). His captors were surprised to see that the millstone used by Guru Nanak was turning, by itself, while Baba ji was simply pouring grist into the opening in the stone as he sang songs to the Glory of One God.

The Guru's songs to 'One God' (the Mughals as Muslims also believed in One God) and, even more the stone's turning by itself amazed the Mughal soldiers who brought this to the immediate attention of Babar.

The present building, inside the town of Eminabad, is a simple flat-roofed room with some ancillaries surrounded by a brick paved compound.

While returning from his travels to the West (Samvat 1578), Guru Nanak Dev Ji paid a visit to Saidpur , now known as Eminabad, to meet his devotee Bhai Lalo. In the following lines from the Janamsakhis, Guru Sahib Ji speaks about those times of upheaval:

"The age is like a knife.
In the dark night of falsehood
I cannot see where the moon of truth is rising."

"Modesty and religion have disappeared because falsehood reigns supreme.
The Muslim mulla and the Hindu pandit have resigned their duties, the Devil reads the marriage vows.
Praises of murder are sung and people smear themselves with blood instead of saffron."

"They who had beautiful locks with vermilion dyed the parting of their hair,
have their tresses shorn with scissors and dust thrown on their heads.
They who dwelt in palaces cannot find a place in the streets." 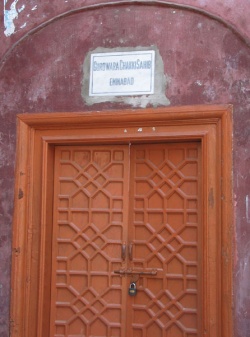 During this period (Samvat 1578) the Emperor Babur attacked Eminabad and captured Guru Ji with his companions and imprisoned them. The captured were given grinding mills and put to grinding corn to feed the Mughals troops. While grinding the corn Guru Ji went into contemplation and sang the glories of God. While Guru Ji sang about the creator the grinding mill continued to grind without any visible means of power, all who observed bowed their heads for surely they were in the presence of a great soul. This news was carried to the ears of Babar. Babar came down to the dungeons and waited until Guru Ji had finished singing. When his eyes met with the Guru's he folded his hands and bowed and begged forgiveness.

Babur requested that Guru Ji accompany him to his tent. Guru Ji asked Babar to release all the prisoners as they had committed no crime, and then he accompanied Babur to his tent.

"My cup is full. I have drunk the cup of my Lord's love which fills me for all time."

On hearing the words of the Guru, Babur remained in deep thought for a long time and then asked Guru Ji humbly "What can I, do for you?"

"Nothing," said the Guru "The soul supreme Being has Himself commissioned me to spread His message of Naam, and I enjoy His grace and gifts. Those who forsake Him and attach themselves to others lose all. He makes emperors and kings, and He turns them into dust."

Babur bowed before Guru Ji and begged for counsel for a better life.

"Be just to all, and never do injustice to anyone,"said Guru Ji. " Never depart from the path of truth. Be merciful and forgive others as you would wish to be forgiven. Do not covert that which belongs to others. Do not sow the seeds of cruelty. He who is cruel, suffers."

These words Babur took to heart and from then on endeavoured to be a just ruler.

Due to Guru Ji's request Babur released 11,111 other prisoners.

A fair is held here every Vaisakhi.