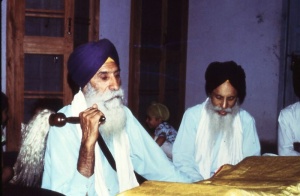 Granthi: A ceremonial reader of the Guru Granth Sahib.

Duties include arranging daily religious services, reading from the Sikh scripture, maintaining the gurdwara premises, and teaching and advising community members. A granthi is not equivalent to a minister as there are no such religious intermediaries in the Sikh religious tradition.

GRANTHI, from the Sanskrit granthika (a relater or narrator), is a person who reads the granth, Sanskrit grantha (composition, treatise, book, text). The terms are derived from the Sanskrit grath which means "to fasten, tie or string together, to compose (a literary work)". In Sikh usage, granth refers especially to the Guru Granth Sahib, the Scripture, and the term granthi is used for the (usually salaried) officiant whose main duty it is to read the Holy Book in public.

The granthi is the principal religious official of Sikhism, who should not be thought of as a "priest" or preacher in the usual sense. Priestly offices of other major South Asian and Western religious systems typically rest on conceptions of a fundamental separation between their officers and those to whom they minister. Hereditary Brahman priests are distinct in virtue of having inherited unique religious properties such as specific texts and temples, or at least a religious rank or status that sets them inherently apart from those they serve. Priests, ministers, and rabbis in the Judeo-Christian tradition are often thought of as receiving a "calling" or "election" that others have not heard, and are ritually "ordained" into a special ministerial group within the community that sets them apart from "lay" members and entitles them to special esoteric knowledge not generally accessible. But the office of Granthi is defined by common practice and the role of Granthi in any ritual can in principle be taken by any Sikh. There is no ordination of a Granthi apart from initiation as a Sikh, and the relationship between a Granthi and any other Sikh is one of perfect equality of status and religious importance.

The Granthi is the custodian of the Holy Book in the gurdwara, the Sikh place of worship. He ceremonially opens it in the morning and closes it in the evening. In addition, he performs morning and evening services, which include the recitation of specific banis or compositions from Scripture, and leads the ardas or supplicatory prayer. He may also perform or lead kirtan, i.e. devotional singing of the hymns. He conducts the rites of passage, and performs path or complete reading of the Scripture on behalf of the sangat (local Sikh community) or individuals and families, in the gurdwara or at private homes. In small villages or urban localities, he is responsible for maintaining and managing the gurdwara with public donations and offerings. Larger gurdwaras have their local managing committees with Granthis employed on regular salary. Since Sikhs do not have a hereditary priestly caste or class nor an hierarchical body of ordained priests and clergymen, any person competent to perform the duties and acceptable to local community can be appointed a Granthi. He should of course be a baptized Sikh of blameless character, leading a simple life of a householder according to the ideals and traditional code of Sikh conduct. Ideally, a Granthi is fundamentally an ideal for a Sikh in general stressing piety and humility. The Sikh Granthis generally wear turbans of white, black, blue or yellow colour, long shirts or cloaks and churidar trousers, in the manner of breeches with folds at the ankles. They carry a white sash or scarf hung loosely around the neck. Their duties and obligations are set out by example rather than by rule or dogma.

Historically, the first Granthi of the Sikh faith was the venerable Bhai Buddha (1506-1631), who was so designated by Guru Arjan to attend upon the Adi Granth (Holy Granth) as it was installed for the first time in Harimander at Amritsar. This was the origin of the office. Since copies of the Adi Granth began to be made immediately after the completion of the first recension and as the number of sangats increased, more Granthis were needed for service. The office of Granthi became particularly significant after the Adi Granth was proclaimed Guru by Guru Gobind Singh (1666-1708) just before his death. The most eminent Granthi after Bhai Buddha at Harimander, the Golden Temple of modern days, was Bhai Mani Singh, appointed to the exalted station by Guru Gobind Singh's widow, Mata Sundari, in 1721. He met with a martyr's death in 1737. During the subsequent period of persecution and turbulence, while the Sikhs were fighting a guerrilla battle for survival, hiding in hills, forests and deserts, Sikh shrines were looked after by priests of the Nirmala and Udasi sects who being recluse sadhus were spared by the persecuting Mughal and Afghan rulers. Most of these early custodians or granthis were dedicated men and some of them were eminent scholars, too. But later, as large jagirs or land grants were made to these shrines by Sikh rulers, corruption crept in and the gurdwaras had to be freed from the hold of mahants (as the custodians called themselves) by launching a prolonged agitation. Ever since, the granthis are by and large amritdhari (baptized) Sikhs. They are addressed respectfully as babaji, gianiji or bhaiji. There exist several institutions for the training of Granthis, the best known among them being the Shahid Sikh Missionary College at Amritsar run by the Shiromani Gurdwara Parbandhak Committee, a democratically elected body legally entrusted with the management of the shrines and the conduct in general of religious affairs of the Sikhs.

Above adapted from article By Murray J. Leaf