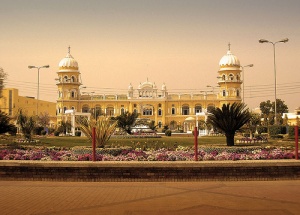 Gurdwara Janam Asthaan, the shrine representing the home of Mehta Kalyan Dass and Mata Tripta, father and mother respectively of Guru Nanak Dev, where the Guru was born, was established by Baba Dharam Chand (1523-1618) son of Baba Lakhmi Das and grandson of Guru Nanak Dev.

The shrine must have been established before the end of the sixteenth century because Guru Arjan Dev (1563-1606) is believed to have visited it. The present Gurdwara, built by Maharaja Ranjit Singh, includes a domed sanctum with an attached rectangular pavilion, surrounded by a vast walled compound.

A room was first built here by Guru Nanak's son, Baba Lakhmi Das, but it was more probably constructed by his grandson, Baba Dharam Chand. The one room structure was known as "Kalu ka Kotha", literally "house of (Mahita) Kalu", father of Guru Nanak. Later it came to be known as "Nanakayan", literally "home of (Guru) Nanak".

Maharaja Ranjit Singh (1780-1839), at the insistence of Akali Phula Singh and Baba Sahib Singh Bedi, constructed the present building, a domed square sanctum with a pavilion in front standing on a spacious, raised platform, and made an endowment of about 20,000 acres of land for the maintenance of the Guru ka Langar.

The management remained with Udasi priests until the Shiromani Gurdwara Parbandhak Committee took it over after the gruesome events of 20 February 1921. With the partition of the Indian subcontinent in 1947 and the migration of Sikh population from the Western part of the Punjab, now part of Pakistan, the management of all Sikh gurdwaras in the newly created State, including those at Nankana Sahib, passed to the Waqf Board. The Government of Pakistan later allowed 15 Sikhs to stay in Nankana Sahib to perform the daily services in the shrines. In 1968 the number was reduced to 5.

In 1980's only a granthi (a scripture reader) and a few Sindhi Sikhs stayed at Gurdwara Janam Asthan. Batches of pilgrims from India were occasionally allowed to visit with special permission from the Pakistan Government.

This Gurdwara, within Nankana Sahib town, marks the place where Guru Nanak's school once stood. As a child Nanak was a quick learner, who soon became proficient in Hindi, Persian, arithmetic and accounting. The Gurdwara is a small square room with a fluted lotus dome above it and ornate masonry work on the exterior. It is also called "Gurdwara Maulawi Patli".

On February 20, 1921, about 150 unarmed Sikhs entered the Gurdwara early in the morning. The mahant's private force of armed gundas (goons), who had been hired to teach the Sikhs a lesson, closed and secured the main gate behind them. Then the Mahant and his goons shot, knifed, and even burnt alive the Sikh pilgrims.

Hearing of the massacre, thousands of Sikhs walked long distances to Nanakana Sahib. They were forced to go by foot because train travel was prohibited to them. The Sikhs were determined to take charge of the Gurdwara and of the dead bodies of the Sikhs who had been massacred the day before.

However, when the British authorities learned of the massacre they quickly ordered their troops to occupy the Gurdwara before Sikh protesters could arrive. They were there to protect the mahant's interests, as they had no intention of turning the Gurdwara over to the Sikhs.

The Sikhs, determined to sacrifice their lives if necessary, organized themselves into Jathas or groups. They pressed forward, group after group, in spite of the army's threats to gun them down.

Finally the soldiers yielded, unwilling to face killing so many innocent Sikhs, undoubtably the Jallianwalla Bagh massacre was still fresh in their minds. The mahant and his men were not harmed, but were taken into custody by the police. Sikhs took charge of the Gurdwara and the corpses of the massacred Sikhs. Scattered throughout the gurdwara, many of the bodies were partially burnt.

Several other buildings were added in the years after the S.G.P.C. took control on the next day the 21st February 1921.

The traditional fair which was held here to celebrate the birth anniversary of Guru Nanak Dev continued with great eclat until Britain's 1947 Partition of India. Since that year the Pakistan government had permitted only 15 Sikhs to stay at Nankana Sahib to carry out routine services at the shrine, but their number was reduced to a bare five in 1968 and, still later, to a solitary Granthi who maintains a token attendance with the help of some sahajdhari (unbaptised) Sindhi Sikhs.

Thrice a year, on Baisakhi (April), death anniversary of Maharaja Ranjit Singh (June) and birth anniversary of Guru Nanak Dev (November), the Pakistan government allows Sikh jathas, a few hundred strong each, to visit this and other shrines at Nankana Sahib, Panja Sahib and Lahore.

According to Waliullah Khan's, Sikh Shrines in West Pakistan, there is a sacred relic, Chola Sahib, preserved in Pakistan. The relic is a cloak with Quranic verses embroidered on it supposed to have been presented to Guru Nanak Dev by the ruler of Baghdad during the Guru's visit to that city.

If there is such a relic (old Sikh documents make no mention of it), it is a fake relic, because the Chola Sahib believed to be the real one is preserved at Dera Baba Nanak in Gurdaspur district of the Indian Punjab.