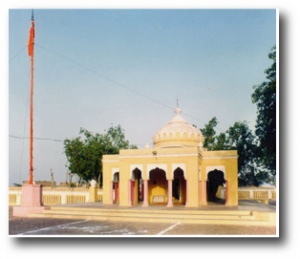 Gurudwara Kiara Sahib is situated at a distance of one and a half kilometres from Gurdwara Janam Asthan. According to Janam Sakhi, when Guru Nanak was yet a young man, he was sent to graze cattle. While resting underneath a shady tree, Guru was immersed in thoughts and the cattle went astray in the fields of a farmer.

On having seen this, the farmer got red with rage. The clamouring made by the peasent disturbed the young Nanak waking him from his trance. Recognizing the the son of the village's patwari, he made a complaint to Rai Bular who went with the farmer to see the damage. But on getting to the field that had been trampled everyone was surprised to fine no damage at all.

The Guru drove the cattle towards his house. On his return, the Guru just had a kind look at the fields which turned green. By watching this miracle, the Hindus and the Muslims revered the Guru. This Gurdwara is situated in that historical field. The building is large.

A boundary wall and a sarovar has been built around the whole field. Before obtaining the management of this Gurdwara by the panth in February 1921, a trio consisting of Mahant Fauja Singh, Mahant Ujjagar Singh and Mahantani Inder Kaur, was managing the affairs of this Gurdwara. After the partition of 1947, This Gurdwara came under the Pakistan Waqf Board. The holy tank is dry and Sri Guru Granth Sahib is not opened ceremoniously.