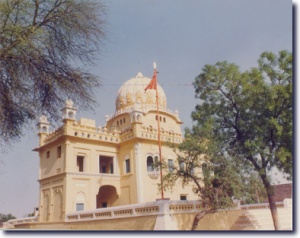 About 300 metres south-east of Gurdwara Janam Asthan, marks the field where Guru Nanak used to play in the company of other children. As is apparent from the name, this site is related with the wonderful adventure of the early childhood of the Guru. The Guru in his infancy, used to transport the enlightenment of the Naam (God's name) to the minds of his friends, while playing with them.

The original holy pond Nanaksar with this Gurdwara was built by Rai Bular, the ruler of Talwandi. Guru Hargobind during his visit to the town is said to have enlarged the site. Diwan Kaura Mall, a Hindu noble (d. 1752), after his victory over Multan with the assistance of the Sikhs in 1748, further enlarged this Gurdwara and brick lined two sides of the nearby tank originally got dug by Rai Bular.

During the early 1800s, Maharaja Ranjit Singh had the building renovated and the tank enlarged and properly lined. Of the land donated by him, about 3,000 acres were allotted to Gurdwara Bal Lila. After the 1921 tragedy at Gurdwara Janam Asthan, the custodian mahants of this shrine voluntarily handed it over to the Shiromani Gurdwara Parbandhak Committee in exchange for suitable maintenance allowance for their families.

Before the Saka of 1921, the arrangement of this Gurdwara was in the hands of the Nirmala Singhs. Besides Tirath Singh, the Mahant there were also 37 other patidaars. The Gurdwara came under the panthic management at the time of the Gurdwara Sudhar Movement. This Gurdwara remained in the panthic hands up to 1947, but after the partition, the Pakistan Waqf Board has been serving the Gurdwara.

The sarovar adjacent to the Gurdwara is lying dried up and the Gurdwara is opened only at the time of visiting to it by the Sikhs. There is no arrangement of Parkasha of Guru Granth Sahib. It is only the building which is safe and sound.

The present Gurdwara was reconstructed during the 1930's and 1940's under the supervision of Sant Gurmukh Singh Sevavale (1849-1947). The new building on the bank of the adjoining sarovans a multistoreyed domed edifice.

Nankana town is part of Nankana Sahib District in the Punjab province of Pakistan. This district is adjacent to Sheikhupura district and until 2005 was part of this district.