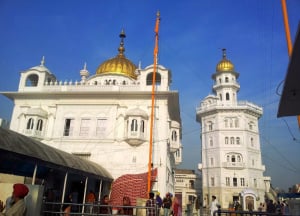 The main Darbar Sahib at Baba Bakala, with the 9-storey Bhora Sahib and Manji Sahib in front of it, both in the background.

The main complex contains 4 Gurdwaras. The Gurdwara's Sarovar is located on the left hand-side of the bazaar leading up to the main Gurdwara complex. Opposite that there are also lodging facilities available for pilgrims.

Baka Bakala Sahib is located in the town of Baba Bakala which is in the Amritsar district of Punjab, India. The Gurdwara is on Gurdaspur Road and is 42km away from Amritsar, 46km from Jalandhar and 193km from the state's capital of Chandigarh. It is instantly recognisable by the tall 9-storey Bhora Sahib beside the main Darbar Sahib. 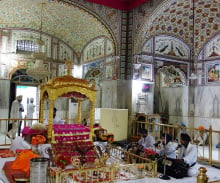 Interior of the main Darbar Sahib at Baba Bakala 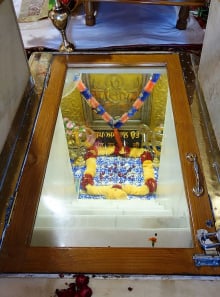 The cellar (Bhora) where Guru Tegh Bahadur meditated in solitude

The town of Baba Bakala was originally known as Bakkan-Wala (meaning 'Town of the Deer' in Persian) however over time this was shortened to Bakala. The town was originally a mound, where deer were found grazing.

In 1664, before passing away in Delhi, the Guru at the time, Guru Har Krishan uttered "Baba Bakale" (hence the modern name of the town: Baba Bakala) which the Sikhs at the time interpreted as meaning that the Guru's successor was to be found at the town of Bakala, close to Amritsar. The Sikhs now had to find the true Guru in Bakala.

The Guru was then found by a trader from Jhelum named Makhan Shah Lubana. As a trader, he was on a ship carrying his goods while it became caught up in a furious storm. As he was in danger, he began to pray to God and Guru Nanak for safety. He then vowed that he would donate 500 dinars to the Guru. Unaware of the news that Guru Har Krishan had passed away, Lubana reached Delhi to fulfill his vow. He was then told by the Sikhs that were present there that the Guru proclaimed his successor to be in the town of Bakala.

Eager to carry out his promise as soon as possible, Makhan Shah then reached Bakala but was shocked to see many people pretending to be the true Guru. He then came up with a plan to donate 2 dinars to each of the self-proclaimed Gurus, as he knew that the true Guru would demand the full amount that he had promised. None of the imposters demanded the full amount and so Makhan Shah was unable to find the Guru. He then asked around and he heard of a solitarian in the area, who was called Tegh Bahadur, and was the son of Guru Hargobind.

Upon placing 2 dinars before this man, the man replied "God bless you, my man, however why only two Dinars after pledging five hundred? The Guru is never in need of any thing but a Sikh is expected to keep his pledge to the Guru". Lubana thus discovered the true Guru and told him that he would reveal his identity to the World, however the Guru discouraged Lubana to do so as he was hoping to meditate in solitude for longer by saying that his face would be blackened (implying that he will be dishonoured). Makhan Shah took this as a challenge, so he threw ash on his face and climbed the rooftop, announcing that he had found the true Guru by shouting "Guru Ladho Rae" ("The Guru has been found" in Lubanki). Up until they were found, Guru Tegh Bahadur meditated in solitude for 26 years, 9 months and 13 days, however they were not a recluse and they still attended to family affairs and he also visited the 8th Guru in Delhi whilst he was there.

Since this historic event Baba Bakala has become a place of pilgrimage for Sikhs from all around the world. A beautiful Gurdwara now stands at the very spot where Guru Ji used to meditate in his underground cell (Bhora Sahib). The Gurdwara has many beautiful paintings pertaining to Sikh history. People gather in thousands on every amavas night. Also, an Annual Fair called Rakhar Punya is held on Raksha Bandhan when many people gather at this holy place from all over the country.

After finding Guru Tegh Bahadur, the Sikh congregation set up the Deewan here. While preaching on Deewan the Shia Masand, fired at the Guru and the bullet scraped along the Guru's dastaar without causing any harm.

This is the 9-storey building built above the cellar where Guru Tegh Bahadur meditated in solitude for 26 years, 9 months and 13 days and also where Baba Makhan Shah Lubaba stood and announced that he had found the true Guru.

This is the place where in August 1664 the Sikh Sangat arrived in Bakala and anointed Tegh Bahadur as the ninth guru of Sikhs. The Sangat was led by Diwan Durga Mal, and a "Tilak ceremony" was performed by Baba Gurditta on Tegh Bahadur, formally conferring Guruship onto him. 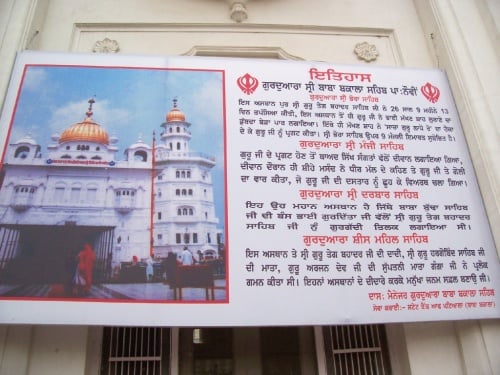