From SikhiWiki
(Redirected from Ek-Onkar)
Jump to navigationJump to search 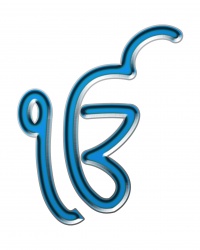 This symbol ੴ pronounced Ek Onkar is the symbol that is used to represents the "One Supreme Reality" or "One God." This is the symbol that appears at the beginning of the Guru Granth Sahib. Its the icon that starts the holy text which was first written by Guru Nanak.

This fundamental teaching of Sikhism, is that there is only "one Essence" or "one reality" that sustains all; this is paramount to the understanding of Sikh beliefs.

By writing 1 (One) in the beginning, it has been shown that Ekankar, God, who subsumes all forms in Him is only one (as opposed to the two or three of Christianity or Siva, Bhrama and Vishnu or the thousands of Hinduism).

Ura, the first Gurmukhi letter, in the form of Oankar shows the world controlling power of that one Lord...

Read the rest of the Var at SikhiToTheMax

Ek Onkar means "God is One." The symbol is an emblem of the Sikh religion and is found on Gurdwaras (Sikh temples) around the world. The symbol has some resemblance to the Sanskrit OM as seen in the Hindu religion. Ek Onkar forms the cornerstone of Sikh belief in the unity and oneness of God.

Ek Onkar is the beginning of the Sikh Mool mantra, and the first phrase in the Sikh Holy book, the Guru Granth Sahib:

There is but one God. Truth by name, the creator, all-pervading spirit, without fear, without enmity. Whose existence is unaffected by time, who does not take birth, self-existent, who is to be realised through his grace.

Ońkĝra is itself found in ancient Sanskrit literature. Sanskritic rules of sandhi or phonetic liaison turn the 'm' of Om into a velar/guttural 'ń' when preceded by the velar/guttural 'ka', so that the nasal consonant and the velar 'ka' can both be spoken at the back of the mouth. Liaison removes the unrefined pronunciation which would result from a labial 'm' followed by a velar 'ka' producing a clumsily pronounced Omkĝra. Any conjunct nasal consonant can be represented however, by a 'm' with a dot above or below, but in pronunciation, must match the consonant group to which the proceeding consonant belongs.

According to Swami Vivekanand, "Onkar is the most holy word of the Vedas". A symbolic word meaning the Supreme Being, the Ocean of Knowledge and Bliss Absolute". (Raja Yoga)

Another definition of the word is given in the Mandukopanishad: "That which was, is and will be, is all Onkar. And that which triple time transcends is Onkar too. (Verse 1)

The figure 'one' appended to Onkar does not merely signify God's unity as against trinity, but also affirms His being a personality and not merely a Shunya or void. "Transcendent (O-an) - Immanent (-kar)", suggests Kapur Singh.