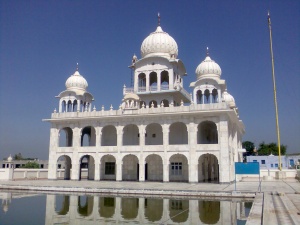 The site was then a garden belonging to two brothers, Rai Jagat Singh and Rup Chand, the local landlord. The Guru sent some of his disciples to request Rai Jagat Singh to let him take shelter in his haveli. Jagat Singh, for fear of the rulers wrath, refused, but his younger brother, Rup Chand, asserting his right as a co-owner of the house, allowed Guru Gobind Singh to enter.

According to other chronicles, the names of the owners of the property were Budhi Chand and Gharibu.

According to the book, Guru Shabad Ratnakar, Mahan Kosh, Guru Gobind Singh had been here once before when he was on his way to Kurukshetra in 1702. A small gurdwara was first constructed here around 1930 by Sardar Bahadur Dharam Singh (1881-1933), a well known philanthropist of Delhi. There was also another battle, between Guru Gobind Singh and two Mughal forces, that had occurred near here years before.

The present building was raised in 1963 by Sant Piara Singh of Jhar Sahib. It duplicates the design of the central building of the older Gurdwara Qatalgarh Sahib a square sanctum on the ground floor within a square hall, and a domed room above the sanctum with decorative cupolas at the corners.

The Gurdwara is managed by the Shiromani Gurdwara Parbandhak Committee through a local committee, with offices located at Gurdwara Qatalgarh Sahib.