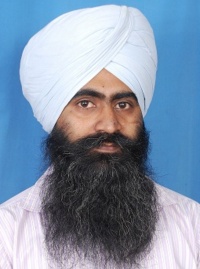 Bhai Gurjeet Singh ‘AZAD’ and partners are a ragi jatha who are well known to most Sikhs in Punjab. They have been performing kirtan from a very young age and are self-taught. Bhai Gurjeet Singh is from Gurdaspur district in Punjab and now settled in Ludhiana is an exceptional vocalist and very able harmonium player. Bhai sahib has been performing for over a decade and he has with his Jatha and as a member of Sikh Missionary Collage Ludhiana enlightened Guru-ki-sangat in Punjab and other parts of the INDIA. Bhai ji has done a Diploma in Gurmat Sangeet From Punjab University, Patiala.

He and his jatha play in classical raga and modern raga based tunes as a three-some where Bhai sahib is the lead vocalist with support from his jatha members on harmonium and tabla. There style is slow and mallow and very conducive to Gurbani kirtan and they have huge following throughout the world and especially in Punjab.