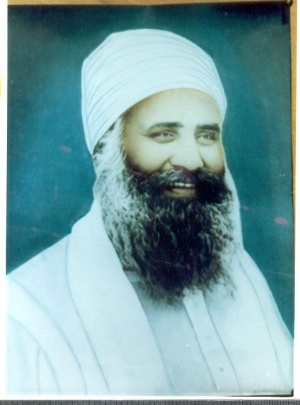 Inder Singh (his childhood name) had four brothers and two sisters. Even as a child he was very soft spoken, of a kind temperament and had a very helpful attitude to others. He was very fond of listening to the historical accounts of the lives of the Sikh Gurus and the stories of the lives of saintly and divine people.

That is why, perhaps, even at a young age he never liked to indulge in any 'trivial' playing or simple games that most children are fond of. Instead of jumping and indulging in playing around with boys of his age, he would rather spend time meditating on the formless god, in a secluded and quiet place.

When he was five years old, he was sent to study in a school in the nearby village of Nathowal, but he could never keep his mind on the studies. Even though a few residents of his village and his elder brother S. Phagan Singh pitched in and tried their best to educate him, he never showed any interest in mundane worldly matters; his mind remained detached and restless.

The efforts to put him through school in hopes of having him acquire the normal basic education, deemed necessary by village and society, drove him even further from his books and more towards Godly matters. Seeing that their efforts at educating him was pointless, he was, at last, asked to join in the family occupation of agriculture.

Engaged in work and business

With some success he was able to do that work with great devotion for many years, but while he kept his hands busy in work, his mind always wandered from worldly business towards God, his detached and restless mind was ever in search of a 'complete saint', a holy man with a noble and pious soul visiting his or any nearby village who could guide him to God.

His depressed, unattached, austere and troubled state of mind could easily be read on his face. Whenever he had the chance to shed his work and reach the benign presence of a holy man, he would often say:

“You befriend a holy man and they will make you their own. Making God your friend will make everyone else your friend, as well. The world is full of selfish friends, out world friend, false friends, deceitful friends, but Guru Nanak is our only true friend. Make those people your own who would not separate from you here or there in the world beyond. Those who would help us associate ourselves with the feet of Guru Nanak".

He was only ten or eleven years old when the good deeds of a past life, bore fruit when Baba Nand Singh ji Kaleranwale, a complete celestial master visited his village. He made it a point to attend the Baba's congregation both in body and mind.

During this period he would perform service as a water carrier in the cook-house and also fan the holy congregation with devotion and love. Thereafter, he started visiting Nanaksar Kaleran every day along with other devotees to gain the darshan, a glimpse of Baba Nand Singh ji. He would often stay there for many days performing voluntary service.

Thus he developed an ever increasing attachment with Divinity. After three years when Baba ji visited his village again, he was attracted to the service of the Sant so much, that he left his home for good in favour of the house of the Lord.

He partook of Khande di Pahul from Baba ji and started earnestly to achieve the higher state of knowledge for which he had longed his whole life through worship, penance, meditation, discipline and austerity. He would spend much time doing service for the holy congregation.

Seeing this tendency, Baba ji sent him to the care of his teacher Baba Wadhawa Singh ji of Lehra Khana, in order to study spirituality. There he completed his spiritual education staying for many years. Then he returned to the abode of Baba ji at Kaleran where he took up service. Baba ji was very happy to see Inder Singh's love of and involved study of Gurbani.

During this period, his name was changed from Inder Singh to Ishar Singh. He was every busy with the care and service of others, forgetting himself completely. He would neither wear socks nor shoes on his feet. His heels developed cracks, which were wide enough to hold small stones. He had made no hut for his rest.

Service for the holy

Whenever he found sometime for rest, (specially when Baba Nand Singh ji would be busy in reciting his daily prayers) he would sit outside his gate least he was called by Baba ji at any moment. Whenever called, he would jump up and rush to his holy presence, often hitting his forehead into a pillar or wall. With bumps on the forehead, he would rush to attend to Baba ji's orders.

At last he reached a stage of oneness with Baba ji. Many a time when Baba ji would just think of or desire something (milk, curd or curd milk), Baba Ishar Singh ji would already have the item in his hand ready to hand to his master.

Baba Nand Singh ji would often make a mention of his selfless devotion to the Sangat during the daily assembly. Baba Ishar Singh would be ever ready to perform service.

Perpetual service had caused the nails of some of his fingers to fall away – from the very same hands that later blessed many rich and poor people alike. If, he ever extended his hand towards someone, that man would forget all about himself and go into a different state of mind.

He would often experience an electric current running from the Sant to his body. That would bring to the all his sins and make him cry in order to commence his lift of penance to wash off the past ill deeds.

Turban given to Baba Ji

After the departure of Baba Nand Singh, on the tenth day of his leaving this earthly coil, the Sant's Sangat (holy gathering) offered Ishar Singh his turban, symbolic of the dawning of the mentle of his successor to continue with the Divine work, but he was still in a state of shock at the departure of his dear one.

Baba Narain Singh ji constructed a thirteen storey ‘Thath’ at this very place, in order to attach the Sangat with Guru Granth Sahib ji the embodiment of Guru Nanak in accordance with the code established and practiced by Baba Nand Singh ji. Baba Ishar Singh Ji started discourses and ‘Kirtan’. People thronged the place to listen to Baba ji.

On 13th Mar 1950, he commenced the work of digging up a ‘Sarovar’ (pool) at Nanksar Thath Kaleran. The engineer and mason but with the kind grace of Guru Nanak Ji, Baba ji could complete the work in 28 days and declared it open for bathing by the Sangat. He also commenced work on the underground room where Baba Nand Singh ji used to pray and worship.

After some more time, he got a five storied thath completed and covered its dome with gold plates. The main congregation hall and The Baradari (place with twelve doors) too was completed at a fast pace by the ever increasing voluntary service of people of the surrounding villages. With all this help Baba Ishar Singh ji completed all this miraculously in a short span of time.

The important thing to note is that he never asked for a penny from any one for completing all these works. He did not even permit any of his mendicants to collect money for these tasks. He would often say in holy congregation that he had never even touched a currency note in his life, even just to see what it felt like. Sangat would take care of the meals as well as all material required for construction.

Baba ji enforced the following set of codes of conduct for Nanaksar Kaleran and other ‘Thaths’ with equal fervour so as to bring in uniformity and innate oneness among the sangat at all places. Similarly he extended the practices and norms set up by Baba Nand Singh and followed the laid down code for Paths (recitation of Gurbani) Katha (discourses), Kirtan (singing of holy hymns) at various functions. Punctuality and sticking to the laid down rules was his main principal.

He would pay particular attention to the service of Sri Guru Granth Sahib, cleanliness of the assembly hall and its decorations. He would ask sewadars (volunteers) and inmates of the Dehra to ensure strict compliance of the rules, code of conduct and other instructions laid down from time to time. One can say that the small orchard of Sikhism that he had looked after for twenty years has now blossomed into a full-fledged garden in the country, as well as abroad spreading out the sweet fragrance of the philosophy of Guru Nanak.