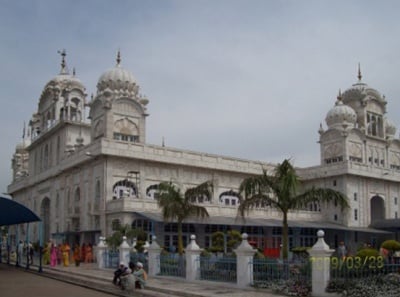 Gurdwara Karamsar, Rara Sahib is a result of the charismatic dedication of two noble spirits Sant Isher Singh Ji and Sant Kishan Singh Ji. On the request of Sardar Gian Singh Rarewala, they had stayed in the village Rara Sahib and had made this desolate place their abode.

This village that was transformed from Rara to Rara Sahib by the visit of the sixth Sikh Guru, Guru Hargobind Ji. Rara Sahib is located 22km south-east of Ludhiana, 14km north-east of Ahmedgarh and 22km north-west of Khanna. It lies on the Chawa-Payal-Ahmedgarh road and is situated on the bank of Bathinda branch of the Sirhind Canal.

The witness of Sant Isher Singh Ji's nine-year meditation and penance is the well, which is still intact. This memorial of Sant's devotion is located half a kilometre to the east of the main Gurdwara building.

As the Sant's popularity spread, people started visiting the place from far and wide. With the efforts of the devotees the Sanctum Sanctorum (Sri Darbar Sahib) was built on the bank of the Srihind Canal In 1936. The place was named 'Gurdwara Karamsar' after Sant Karam Singh Ji of 'Hoti Mardan'.

The holy hymns were chanted every morning and evening. The community meals (the Langar) were served. The enthusiasm of the devotees soared. Consequently, the month-day (Sangrand) and the 'full-moon day' (Pooran-mashi) began to be celebrated with full religious fervor. By and by the hillocks were levelled and many villages donated land to the Gurdwara.

In 1940, Sardar Mohan Singh of Coca Cola fame, arranged for a monumental enclosure to be built for Sant Isher Singh Ji's meditation in seclusion. Thereafter the Sant made it his abode. At present the place of his seclusion is revered and preserved in the Sant's memory. It houses his relics. The devotees flock to this place throughout the year to have a glimpse of the Sant's relics.

The compound of the Darbar Sahib was expanded in 1968. In 1980 Sant Kishan Singh Ji initiated the construction of the magnificent congregation hall in front of the Darbar Sahib. This unique hall measuring 235 × 135 feet was ready by 1983. This magnificence of this elegant hall speaks volumes.

One enters the Gurdwara through the base of a lofty clock tower crowned with a dome. The loftiness of this 105 foot tall tower beckons and welcomes the devotees to the house of Guru Nanak for free community meals and shelter without distinction of any kind.

Hygiene is the hallmark of Sikhism whether personal or of surroundings. For the hygiene and the 'holy dip', a holy tank has been built in front of the diwan hall. It measures 83 × 62 feet and is surrounded on all sides by a 14 foot wide verandah (prikarma). Every fortnight, the water is drained to clean the tank. Moreover a continuous flow of water into and out of the tank is maintained simultaneously. The drained water is used to irrigate the farm managed by the Gurdwara.

In front of the diwan hall is the spacious building of the community mess where community meals are served continuously.

The Gurdwara complex has about 250 living rooms wherein about three hundred attendants are accommodated permanently. There is also a special arrangement for accommodating the needs of the homeless and helpless elderly. The Gurdwara trust manages a sixty acre farm. Besides that it also manages a dairy farm with 150 cows and buffaloes.

The devotees here celebrate the monthly and annual religious festivals with full religious fervor. The birthdays of Guru Nanak Dev Ji and Guru Gobind Singh Ji are celebrated with enthusiasm. The death anniversaries of Sant Isher Singh Ji and Sant Kishan Singh Ji are observed on 26th August and 1st January, respectively. Since 1928 the death anniversary of Sant Attar Singh Ji of Reru Sahib is observed on 9th of Magh month of the Indian calendar, every year.

Monthly congregations are called on the eves of full moon day (Pooran-Mashi) and the 1st day of every month of Indian calendar (Sangrand). On all, important annual gatherings and every Sangrand the devotees are baptized by bestowing them with 'Amrit'.

Besides, Sant Isher Singh Ji's mission is being carried on, by holding religious congregations annually in villages and cities. These congregations are addressed, within the country and abroad, by Bhai Baljinder Singh ji, with the kind support and permission of the present patron Sant Teja Singh Ji Maharaj.

EDUCATIONAL AND OTHER WELFARE INSTITUTIONS

Walking in the foot-steps of Guru Nanak, Sant Isher Singh Ji did a lot of 'Sacha Sauda' (the true business) for the society by integrating himself with its demands and needs. In 1945, he got a school established within the compound of the Gurdwara Karamsar, Rara Sahib. It was later shifted to a specifically built building. This building was handed over to the college, and for the school, Sant Ji had another building made near the village 'Khatra'. At first, he himself managed the school but later on it was taken over by the Punjab Government, which has been running it to date.

In the 500th year of the birth of Guru Nanak Dev Ji, Sant Isher Singh Ji presented a priceless gift to rural masses by establishing a college, which opened up the opportunities for higher education for the poor children of the area. On the Sant's motivation S. Gurnam Singh, the then Chief Minister of Punjab showed a great deal of support in getting the college sanctioned. Thus, the Sant brought enlightenment to the door steps of the needy ruralists. These institutions have proved to be a boon for the area and have contributed greatly to its development.

In order to materialize the dreams of Sant Isher Singh Ji this school was established in 1987 by Sant Kishan Singh Ji. This school is affiliated to the Central Board of Secondary Education, New Delhi. The school has a palatial building, where about 1500 students (from 50 villages) receive an education from a hardworking and qualified staff. The school also provides efficient transportation to the students, to and from the school. Besides, a hostel facility is available for 250 students. The school has a special arrangement of imparting computer education and horse riding lessons.

Besides the school building, the school complex includes a primary block, a spacious stadium, staff colony and students' hostel. This institution has proved a milestone in giving modern and standard education to the children from rural areas.

Due to the lack of medical facilities in the area, Sant Kishan Singh Ji established a hospital in the memory of Sant Isher Singh Ji. This hospital has been serving the people for the last ten years. It provides all modern facilities like x-ray (fixed and mobile), E.C.G. and Cardiac monitoring. The hospital has two general wards, one emergency ward, one cardiac care ward (Intensive Care Unit) and two private wards. It also has two air-conditioned operating theatres where all kinds of surgery and orthopedic operations are carried out. Meals are served free of cost to the patients and their attendants.

Expectant mothers are looked-after and are operated upon by qualified lady-doctors. All kinds of eye-operations are conducted fortnightly by ophthalmologists. There is also an arrangement for vaccination of children and expectant mothers.

The hospital is provided with a large dispensary. The hospital complex also includes the nursing-hostel and accommodation for doctors.

This institution too has proved a boon for about fifty villages around Rara Sahib.