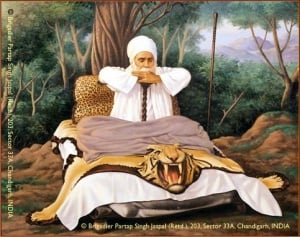 Baba Nand Singh ji (8 November 1870 - 29 August 1943) was born on Puranmashi night in the month of Katak (November) 1870 A.D. in the village of Sherpur, Ludhiana District, Punjab, India to Sardar Jai Singh, an artisan by profession and Mata Sada Kaur. He was a saintly person who attracted a considerable following during his lifetime

It is claimed that as a child, Baba Nand Singh possessed 'supernatural' powers. He was honest at his work, extremely courteous and never lied. At the age of five, he was discovered sitting cross-legged in deep meditation for nearly three hours on a raised and narrow bricked edge of a well outside the village. (A little sleep could plunge the child deep into the well).

Elderly people who spotted him found him in deep ecstasy and total divine absorption and quickly lifted him up to a safe place. When questioned why he selected that spot, he replied, "In the process of devotion and love of Sri Guru Nanak Sahib if sleep overpowers, it is then better to fall into the well and die rather than live a life otherwise". [1] Baba Nand Singh left for his heavenly abode on 29 August 1943.

As a young boy, he was trained in the families craft and then moved to Lahira Khana, in the Bathinda district of the Punjab, to join a seminary run by Sant Vadhava Singh from whom he learned to read Sikh Scripture, the Guru Granth Sahib.

Under the influence of a Sikh mystic, Baba Harnam Singh of Bhucho Kalari, he was drawn to meditation and practised the discipline for twelve years at various places such as Hazur Sahib (Nanded), Lahira Khana, Harappa and Bhirki. Rewarded with insight, he took to preaching Guru Nanak's word and travelled extensively across the country.

He established preaching centres called Thaths at Nanaksar Kalerari, Jharig Maghiana, Bhirki, Harappa, Montgomery, Jhorarari and in a village, Pauda, near DehraDun. In his favourite sermons, he stressed the value of Kirtan,(singing of the holy hymns) and simaran, (repetition of the Divine Name).

Sant Nand Singh died at the village of Kalerari on 29 August 1943 (15 Badron Sampat 2000) and his remains were consigned to the River Sutlej at Sidhvari Pattan. He is best remembered today for Nanaksar Kalerari shrine which was his principal centre. [2]

He left his village at the age of 20 and stayed at Amritsar and Rookee before residing at Hazoor Sahib where he undertook to perform the duty of bringing two pitchers, full of water from the river Godavari at 12:15am for the purpose of ablution of the Sacred Gurdwara. Baba Ji saw Sri Guru Har Krishan Sahib, the Eighth Guru, and Sri Guru Gobind Singh, the Tenth Guru and Sri Guru Nanak Dev ji, the First Guru many times. He heard their divine instructions and was directed to get full knowledge and understanding of the Gurbani of Sri Guru Granth Sahib.

He left Hazoor Sahib in about 1904 A.D. and adopted Sant Wadhawa Singh of village Lehra Gaga as his teacher. Sant Wadhawa Singh was wonder stuck to observe the supernatural powers of Baba Ji who learned completely, in a short time, all that Sant ji had to teach. Sant Wadhawa Singh used to call Baba ji “Rikhi Ji”. Baba Ji was eager to find some gifted soul who fulfilled the definition of Brahmgiani and was told of Baba Harnam Singli ji of Bhucho village in Patiala State.

On the first meeting Baba Harnam Singh directed Baba Nand Singh ji to go on repeating the First Pauri of Japji Sahib for one hundred and fifty thousand times. Baba ji promised to do so, bowed his head and returned to the village of Lehra Gaga. He remain absorbed in meditation for many months, and during this period, Baba ji took short intervals to visit distant places in West Punjab, where he would sit alone far away from habitation, and in rather deserted places.

After some years, Baba Ji visited Bhucho again and met Baba Harnam Singh ji and this time Baba Harnam Singh ji showered his grace and spiritual powers on him. Baba ji began the mission of preaching the worship of One God and His Name and the Mission of Guru Nanak of Universal Brotherhood. He relieved many miserable persons from diseases, poverty and distress and induced them to worship the Guru and the Supreme Being. He sat at a deserted place, away from the village and remained in meditation for days.

In the beginning, for a number of years, Baba Ji used to sit in meditation for days and days in secluded places, far away from the towns and habitation. He used to select some deserted old room, near some river or tank or in some jungle, where it was difficult for anyone to go. His unique dependence on Almighty God and Sri Guru Nanak Dev Ji prompted some fortunate devotees to bring food and bare necessities for him. Baba Ji used to direct devotees to build with mud one temporary hut-like structure for himself and another for Sri Guru Granth Sahib Ji. When he left one place for another, he used to get the structure demolished and burnt.

Path of deep devotion to Naam 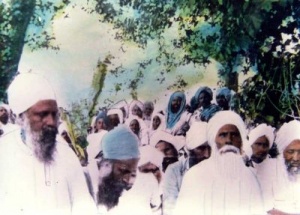 Baba Ji DID NOT perform any miracles, but as explained in the Divine Hymns, supernatural powers automatically serve as humble servants of the Brahmgiani, who attains union with GOD during his lifetime.

Once Baba Ji appeared at Hoti Mardan where famous Sant Baba Karam Singh Ji used to stay. It was summer then and most of the disciples would rest in a vast Chloe (Rivulet) downhill which was dry then. Whenever it rained in the higher hilly regions a flash flood would come thundering down the Chloe. Ignorant of this Baba ji, young and alone, selected a secluded spot in the rivulet and would pass the night there, as usual, in deep meditation.

Soon on one night heavy rains in the higher regions started flooding the rivulet and on its downward journey the rushing waters had gained tremendous momentum and force. Hearing the roar from approaching waters the disciples ran out of the rivulet. Reaching safety they realised that the newcomer was still in bottom of the Chloe in threat being swept away and drowned. They shouted at Baba ji to rush out. But Baba ji was deep in meditation. Meanwhile, the flood in spate had already over taken the place. [1]

The depth of the water is said to have reached 6 feet. They were wonder stuck when the torrents of water encircled Baba ji but did not touch him. The surging waters around Baba ji remained at a respectable distance of a couple of feet.

As Baba ji got up and faced towards the bank, the gushing waters parted giving way, rising again after Baba Ji had passed through. It was clear that it was watching all the while in eager anticipation of washing Baba ji's holy feet. The mighty rivulet in full spate parted its waters to the passing Lord's Beloved and the waters closed in after he had passed through. Mysterious was the way in which nature paid its touching homage to its Baba Nand Singh ji.

In another incident in the jungles of Dehradun during the monsoon season the sky was overcast with Kalamega (dark thundering clouds). Kirtan was in progress but in the deafening sound of lightning and thunder nothing could be heard. It was time for Baba ji to speak. Mahan Baba ji just looked up into the thundering sky. No sooner had he looked up, that the thundering clouds parted in four directions and the sky become absolutely clear. The Full moon become clearly visible and its soothing beams started dancing on the jungle grass-which provided a wonderful natural scene of beauty.

Suddenly a 'pin-drop' silence pervaded the whole place of congregation of thousands but through length and breadth of Nature, this phenomenon was amazing. At the end of the congregation Baba ji asked the Sangat to go to the nearby villages for the night and as soon as the last member of the Sangat was under shelter, clouds joined together and burst into a ferocious downpour. [1]

It is not possible to narrate the most extraordinary events and results that happened during the lifetime of Baba ji. However a brief list is as follows :

The unique way in which Sri Guru Granth Sahib Ji is respected as the living Guru at Nanaksar Gurdwara is worthy of praise. One instance of the utmost devotion and respect shown by Baba ji is given here:

In the winter season of 1938, Baba ji visited the town of Baghanwala. The Thaath could not be constructed immediately. Baba ji observed , "I have not come here to eat food. I have not been able to have Grace and the sight of Divine Guru. If Guru Granth Sahib ji is not brought here by tomorrow I shall go elsewhere.

On this, the whole town came to the spot and worked day and night to complete The Thaath. Sri Guru Granth Sahib ji, was brought by S. Sukha Singh Manglani. After the kirtan of the morning Bani, (Asa Di Vaar) had finished Baba ji submitted to the Guru. "0 True King! I am highly thankful to you. Blessed are the paths, on which you have travelled. Kindly excuse me for the trouble that you have taken. I beg your pardon."

Baba ji then took off his long turban, keeping the small one tied on the head. He first wiped the feet of Bhai Sukha Singh ji then, spread it on the ground, and requested Bhai Sahib to walk on it while carrying the Guru Granth Sahib ji on his head. Where one turban ended, another was spread. Thus the great saint Baba Nand Singh ji used to love and respect the Ever-lasting Sri Guru Granth Sahib ji.