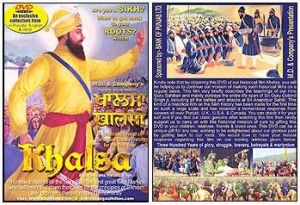 Front and Back of the DVD cover of the film

Khalsa: The movie: is historical film in Punjabi with English subtitles. It is a tribute to all Sikh Guru and the great Sikh Martyrs who laid their lives for the principals of Sikhism, righteousness and to protect the self-respect of Humanity. The film is written, produced and directed by Mangal Singh Dhillon.

The film Khalsa is a cinematic revival of the actual Khalsa history for the first time, in the entire history of cinema. The film was made after a long research programme of 6-7 years and with the formal approval of SGPC. One of the purposes of the film is to bring knowledge of Sikh history to the young Sikhs who have not learnt this in school. So, if you are a Sikh and want to get back to your roots then you must watch this historical film.

Another important purpose of making this film is to project the glorious past and unusual history of Sikhism to the entire world in the right perspective, so that the world correctly recognises the history of this faith and the underlying values. It is hoped that this information will bring honor and respect to the Sikh that they deserve.

This type of film is made for the first time, due to various reasons, like historical contradictions, fear of controversies and some other non-commercial aspects. Mangal Singh Dhillon has done 175 special screenings of this film all over Punjab, England, USA and Canada in most of the prominent Gurudwaras, School Grounds, Stadiums and auditoriums with out charging for any kind of tickets.

This film briefly covers the entire life span of Sri Guru Gobind Singh Ji, including all the defensive battles Guru Sahib had to fight against the treacherous hill kings and the tyrant mughal rulers of those times. It has received a great response from the Sikh Sangat across the world.