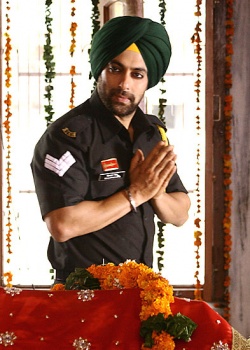 Salman says 'No' to smoking!

Bollywood is doing it again – another movie with Sikhs. But instead of what we have seen in the past with Sikhs often portrayed as unflattering villains and goofballs, it seems that the trend now is to cast people in Sikhs roles where the Sikhs are the heroes. I suppose it is partly in that spirit that the movie is called “Heroes.” Heroes is about two friends who journey through India meeting everyday heroes, at least one of whom is a Sikh.

After Akshay Kumar donned the role of a Sikh in "Singh is Kinng", which has done reasonably well at the box office, it's now the turn of Salman Khan and Saif Ali Khan, who will be seen in turbans.

Salman is playing the role of a Sikh soldier in the upcoming multi-starrer film "Heroes" while Saif Ali Khan is busy shooting in Patiala for "Chhote Nawab" opposite Deepika Padukone.

Actor Mangal Dhillon says Sikhs should be proud of these characters.

"Akshay did very well in 'Singh is Kinng' and that seems to have prompted filmmakers to have their main characters as Sikhs. The positive thing about this trend is that turbaned Sikhs with beard are being cast as central characters and all Sikhs should be proud of this," says Dhillon, who has acted in many Bollywood films and television soaps.

"It is also a sharp contrast from the past when Sikhs were often portrayed as clowns, jokers or alcoholics.

"It clicked for Sunny Deol in films like 'Gadar-Ek Prem Katha' and 'Jo Bole So Nihaal' and it has been the case again in 'Singh is Kinng'. And so other top actors are hoping their films in this avatar will be successful," he says.

"In 'Heroes' Salman also grew his beard to sport a real look. His respect for the turban made him stay away from cigarettes," says Dhillon.

Salman Khan, the famous Bollywood actor may be a Muslim but he respects every single religion as is evident by his feelings expressed in regards to the same during his interviews and 10 Ka Dum episodes. The painter in him also displays his religion tolerance side through his paintings. Most of his paintings combine two religions together. Like his most famous painting which has the image of Jesus Christ along with a mosque.