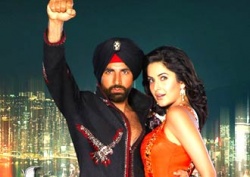 Singh is Kinng the movie starring lead actor Akshay Kumar as "Happy Singh" and actress Katrina Kaif as "Sonia". The film had its worldwide release on August 8, 2008.

The film portrays Happy Singh (Akshay Kumar) as an accident prone Sikh living in a village in Punjab. Although he is shown as a sahajdhari Sikh, he displays some very positive core Sikhi values like being helpful to others and respecting the words of the Sikh Gurus. However as a clumsy individual, although meaning no harm or malice towards anyone, in most instances, he ends up causing more damage than benefit!

So the villagers all scheme to send him away for good. That is where the Australia plot comes in. They scheme to send him to Australia to bring back a Sikh named Lucky Singh (actor Sonu Sood) who has become a don or ganster king. To bring back someone like Lucky Singh looked like a project that would keep Happy Singh away from the village for a good long time! So they sent him off with Rangeela (Om Puri) who was the most jobless person in the village.

The pair, due to an accident, instead of arriving in Australia end up in Egypt, where Happy Singh meets Sonia. There is some great dialogue, drama and humour in the scenes in Punjab and Egypt. When the pair eventually get to Australia, the plot becomes a little serious and more action packed. However, the need to be "helpful and useful" is continuously apparent in the actions of Happy Singh. You will need to watch the movie to fully appreciate the rest of the story as there are various plots and sub-plots which cannot be property covered in this article.

Portrayal of Sikhs and Sikhi

Having watched the film, it can be said that Sikhi has never been misrepresented at any point in the movie. There are many scenes where the core values of Sikhi are reinforced. Gurbani has been used to enhance human values and to provide a positive effect on the characters in the film and the audience. The movie shows Sikhs as brave and caring and noble personalities happy to engage, without prejudice with others from different backgrounds. This gives the strong message of equality of all human beings which is central to the teachings of Guru Nanak

At no point has the film attempted to degrade or belittle Sikhs or Sikhi - it is always upbeat and gives the chardikala message of Sikhi. It is a film that will give an optimistic message of Sikhs to a large audience that I am sure it will reach. Further, it will provide a balanced picture about Sikhs and turban-wearers, in sharp contract to the negative impact caused by the 9-11 incident.

Although the music for the movie was composed by Pritam, there is major input from the three Sikh brothers from the UK who run RDB. The song "Singh Is Kinng" was composed by the U.K Bhangra band Rhythm Dhol Bass (RDB for short). RDB are a Punjabi DJ production team consisting of three Sikh brothers; Kuly, Manj, and Surj who blend western genres with traditional Punjabi beats and vocals. The soundtrack "Singh Is Kinng" was launched officially at the IIFA Awards in Bangkok on June 8 2008. Akshay Kumar and RDB performed 2 songs from the movie Singh Is Kinng at the IIFA Awards.

The tracks from the film include:

Reaction from the Sikh community

Before the movie was released, it was reported that the Sikh community in Khar, Mumbai was very pleased with the portrayal of the Sikhs in the film. Vipul Shah, the producer of the film, was warmly welcomed at the Khar Gurdwara on June 18, 2008. He said, "Our intention was to portray the community in the right way and I am glad that we have managed to achieve it."

However, some members of the Sikh community had expressed their displeasure over the portrayal of Sikhs in the movie. The Shiromani Gurdwara Prabandhak Committee (SGPC), announced that it was up to the audience to decide whether they want to watch the film or not.

On August 1, 2008, the Delhi Sikh Gurdwara Management Committee (DSGMC) sought a ban on the movie, saying that it 'ridiculed' the Sikh community. The commitee wrote a letter to Sheila Dikshet, the chief minister of Delhi, asking her to ban the movie.[4] The main objection raised was that the film promos showed Akshay Kumar's character sporting a trimmed beard, which some orthodox Sikhs found offensive. Akshay Kumar and Vipul Shah had a 50-minute discussion with the DSGMC authorities, in which they explained the positive message behind the film. The DSGMC members requested twelve changes, which the filmmakers complied with. Akshay Kumar also said that the film was aimed at portraying "how strong and brave Sikh community is." As a result of the discussion, DSGMC gave a clean chit to the movie on August 7, 2008.

However, on the same day (August 7), the radical Sikh organization Damdami Taksal asked its followers to protest against the movie. The first show of the movie in NM Cinema Hall of Amritsar on August 8, 2008 was disrupted by some Sikh protesters, who vandalized the hall and damaged property.

The Indian Film Company (AIM:IFC), a leading Bollywood film investment company, is pleased to announce that Singh is Kinng, a film of which it owns the worldwide distribution rights, has achieved what is believed to be the largest opening weekend box office takings for a Bollywood film following its worldwide release on Friday, 8 August 2008. The film, an action comedy starring Akshay Kumar and Katrina Kaif, directed by Anees Bazmee, achieved worldwide gross box office takings of INR 595 million (£7.35 million). The film was released on 1700 screens worldwide, across India, U.K., U.S.A, Canada, and U.A.E.

Find a new seat, Mr Bachchan. The throne has found a successor.

Very rarely, perhaps once in a couple of fortunate generations, comes an actor with such tremendous screen presence that it drips like sweat from his body. Others -- actors, filmmakers, financiers -- all struggle to stand closer to the star in question, to feel the charisma-drops ricochet off his megastar aura, to perhaps touch them. To bask in the reflected glory of the man of the hour. Today, this man is Akshay Kumar more

MUMBAI: After a fairly sparse year in terms of box office success, the much-hyped Akshay Kumar-starrer Singh is Kinng has re-written box office history by raking in Rs 18 crore in the first two days. The film opened with net collections of Rs 8 crore on the first day and Rs 10 crore on the second day of its screening, breaking previous records set in the past 10 years. It is expected to close the opening weekend at Rs 28 crore, smashing all past box office records, too. More...