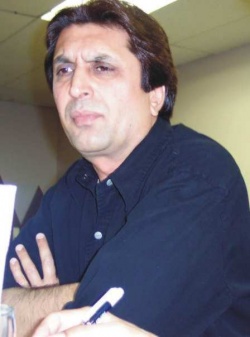 Mangal Dhillon was born in a small village called Wander Jatana in the District of Faridkot in Punjab (India). A well cultured, articulate gentleman who graduated from Government College, Muktsar is a famous Punjabi, actor, writer and producer-director. He started his acting career in theatre in 1978 and has gone on to act in numerous plays, which were performed in Delhi, Chandigarh and Mumbai.

He has appeared in over 30 Bollywood movies and has made many films on Sikhism. Mangal Dhillon's approach to films dramatically changed when he read the views of a father of the Catholic Church on Sikh history. The Father said, 'All the Sikhs will go to Hell for not projecting their blood soaked unparalleled unique history in front of the entire world'. He continued to say that, "We had just the one Jesus Christ and we have spread Christianity all over the world but Sikh history is full of great martyrs and yet hardly anybody knows about it".

After reading this, Mangal felt it sad, unforgivable and shameful thing for the whole Sikh community. This piercing thought made him put aside his successful film and television career and with great passion he began the service of preserving Sikh history for the whole world to see and for future Sikh generations producing high quality films produced in Punjabi, Hindi and English.

The making of Sikh films

Mangal Dhillon with his wife, Ritu formed a production company and released a historical film entitled 'Khalsa (Film)' (literally meaning Pure). The film is based on the actual Khalsa history, which got overwhelming applause throughout the globe. His other productions include 'A Day at the Golden Temple', 'Prakash Sri Guru Granth Sahib', 'The Inseparables' and 'The Greatness of Sikhism'.

The film 'Khalsa' is a cinematic revival of the actual Khalsa history and, for the first time, much research has gone into making it an authentic historical account. The film is a humble tribute to all the Great Gurus and all those great martyrs who selflessly sacrificed their lives for the principles of Sikhism and to protect the self respect of humanity. It also portrays to the world our glorious past and demonstrates the respect and honour the Sikhs have earned through preserving and upholding their faith.

Bibi Harminder Kaur Bhamra from, Canada said, "It is with great shame that I was amongst those children who were ignorant of their religion and language. Today not being able to write or read Gurmukhi is something that I regret. Before I die, I want to learn it completely. What a shame knowing that in spite of all the sufferings and injustices, some of us have turned our backs on our own Great Gurus and our language which you had mentioned in your beautiful introduction to the show. Hopefully, these sacrifices shown through your film will remain embedded in our memories and influence the way we see Sikh children live and view our lives".

Bibi Mahinder Kaur Bhamra from UK remarked rather emotionally: "Waheguru has blessed you with the tremendous courage and conviction to project the Sikh history through an incomparable film like 'Khalsa'. I was moved to tears and experienced goose pimples all over my body during all the touching and emotional sequences".

The documentary about Sri Harmandir Sahib is based on the entire ceremonial pageantry of the Prakash in the early morning and the whole mariyada of Kirtan and Sukhasan of the Guru Granth Sahib at night. The viewers' comments about the film are on select websites but a couple of impressions are worth sharing with the readers.

Mr. Kanwal Deep Singh from Chandigarh said, "I really appreciate this work of yours. May Waheguru bless you to make many more such films to educate us about ones own heritage from which we all are moving away". Professor H.S. Virk from Mohali, Punjab remarked, "It is highly inspirational and motivating for the youth".

There have been numerous press releases in the Sunday Tribune, Chandigarh Tribune, Punjabi Tribune and many others praising the seva undertaken by Mangal Dhillon.

'Parkash Sri Guru Granth Sahib Ji' was also released in 2004. 'The Greatness of Sikhism' should be successfully completed by the end of 2005 as well the docudrama films on Sikh history. All strides and efforts are pooled to the maximum in supporting to perpetuate the historical mission and give the opportunity for all the Sikhs to connect and understand all the perspectives of their faith. He is actively seeking support and sponsorship to achieve his mission to propagate the faith and its history.

Mangal is full of energy and has future plans. 'Saaka Sirhind', a humble tribute to the great martyrdom of the younger Sahibzadaas, will be released in December 2005 on the Tricentenary of this huge sacrifice when both sons of Sri Guru Gobind Singh Ji remained steadfast in maintaining their faith.

In brief, Mangal's associates describe him as: "A tall handsome man with a powerful voice, and characteristic of his multi-dimensional personality, is a versatile actor, a well read and equipped writer, a perfectionist producer-director and an imaginatively sentimental poet, generous, just, loving, man of his word and an individual with high morals, values and character". His reactions to such comments were no doubt flattering but he'd rather undertake tasks in a modest and humble way with the ultimate Grace of Gurukirpa.

Mangal's perseverance, faith in what he does and his focus in accomplishing the mission with the entire Sikh history will not only bring rewards to the Sikh community but raise greater awareness amongst the young Sikhs born outside the subcontinent.