From SikhiWiki
(Redirected from Tegh)
Jump to navigationJump to search 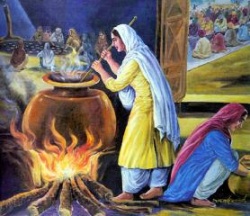 Degh Tegh (Punjabi ਦੇਗ ਤੇਗ) or Degh Tegh Fateh: This term forms part of the Sikh Ardas where it is recited in the line: "ਦੇਗ ਤੇਗ ਫਤਹ, ਬਿਰਦ ਕੀ ਪੈਜ, ਪੰਥ ਕੀ ਜੀਤ...." "Daeg taeg fateh, bihrd kee paaej, Panth kee jeet....". The first phrase is "Daeg taeg fateh" which means victory to "degh and tegh"; the second phrase is "bihrd kee paaej" or "protecting the honour or respect of the old or elderly" "and the third phrase is "Panth kee jeet" or "victory to the panth or 'followers of the righteous path'". In this article, we will just look at the first phrase: "Daeg taeg fateh". The word "fateh" in Punjabi means "victory" or "victorious".

The word "degh" means "large cooking pot" or "cauldron" or an "offering". The word "tegh" means "sword" or "kirpan". The term "degh tegh" refers to the concept of "degh" which is the serving of food to the community as in respect of the Langar; and "tegh" is the protecting of the liberty and rights of each member within the community.

The two concepts are about making sure that everyone in the community is fed and does not go hungry; and also that no one's life in the community is in any danger and that everyone in the society feels safe and protected. Both concepts equally are promoted by Sikhi and the Sikh Gurus. This combined concept has been promoted since the founder of Sikhism, the young Guru Nanak Dev Ji, who when asked by his father to do a "sacch suhdah" or "true deed", gladly and lovingly spent the 20 rupees given to him by his father on feeding the holy sadhus (priests) in the vicinity rather than starting a business as expected by his father.

The concept of communal sharing and of joint protection has been a cornerstone of Sikhi. Below are just two shabads that stress the importance of the values of "selfless service or Sewa" and of "kindness and mercy to all beings" are to a Sikh. These values lead to the concept of "sharing of the fruits of 'mother earth'" and the "joint protection and safety of all communities" as essential targets for the Sikhs to achieve:

Deg and Teg are Persian words, meaning the kettle and the sword respectively. Deg literally means a cooking-pot. It symbolically stands for the free kitchen or Langar; whereas Teg or the sword represents dignity and power. Deg to feed the poor and the stranger, regardless of caste and religion; and Teg, the sword, to destroy the oppressor of humanity and protect the oppressed. Hence Deg and Teg are symbols of service and protection.

In Pakhiano Charitra Guru Gobind Singh says: "Charity and Kirpan are symbolic of self-respect" The terms Deg and Teg have so often come together in the Sikh literature and the history, symbolically meaning the sustenance: spiritual and material.

Some Sikhs also state that Deg is the "Bowl containing parshad" (the blessed pudding served in the Gurdwara) - teg is the kirpan and that Deg and Teg turns parshad into Karah parshad - holy blessed food. Others state that spiritual sustenance ie food (deg) plus kirpan (Teg) is essential for fateh (victory). Fateh does not simply mean victory in a battle field but in every endeavour of life, and Chardikala imparts an art of positive thinking.

Going back to the recitation from the ardas, "Deg, Teg and Fateh" - is a call by the sangat in the ardas for victory of the concept of "degh Tegh" ie May voctory prevail for the concept of "service and langar or food" and the "protection and safety" for all the peoples of the world.

The phrase "Deg Tegh Fateh", an old Sikh saying, literally means victory (fateh) to kettle (deg) and sword (tegh). All the three words have been taken from Persian which was the State language in the formative period of Sikhism. The word deg, i.e. a large sized kettle or cauldron having a wide mouth, which in the Muslim Sufi tradition signified charitable distribution of cooked food, also called langar, has here acquired an expanded meaning.

While retaining its literal meaning, it has come to stand in the Sikh tradition for the ideal of public welfare or general benevolence or munificence. Guru Nanak in one of his hymns likens the Earth to a "deg" from which sustenance is received by all living beings: "ਧਰਤੀ ਦੇਗ ਮਿਲੈ ਇਕ ਵੇਰਾ ਭਾਗ੝ ਤੇਰਾ ਭੰਡਾਰੀ ॥੨॥" "Ḏẖarṯī ḝeg milai ik verĝ bẖĝg ṯerĝ bẖandĝrī.(2)" "The earth is the cooking-pot that the person receive only once; destiny dictates access to your great store." (SGGS p 1190) Similarly, tegh has also acquired a wider connotation and has been used in the Sikh tradition as a symbol for chastisement of the evil and protection of the good.

As Guru Hargobind is said to have told a Maharashtrian saint, Ram Das, during their meeting at Srinagar (Garhval), the "tegh" is for "garib ki rakhia" (defence of the weak) and "Jarvane ki bhakkhia" (destruction of the aggressor). Guru Gobind Singh identified the tegh or sword with the Lord Creator and thereby gave it a still deeper meaning. He addressed it as Bhagauti (goddess), Sri Kharag (Lord Sword), Jag Karan (Creator of the World) and Sristi Ubaran (Saviour of the Creation), besides reiterating its role as protector of the good (suikh santan karnan) and destroyer of the evil (dumiati daman).

The two ideals of deg and tegh supplemented each other. In a supplicatory passage in his "Krishn avtar", Guru Gobind Singh says: "Deg teg jag mai dou chalai deg and tegh both prevail in the world." In Charitropakhyan, deg and tegh (charity and valour) constitute a composite virtue that was the characteristic of the heroes of yore (Charitra 200. 1; 272. 3; 307. 2).

When Sikhs passing through a period of fierce persecution established their power in the Punjab, this maxim was adopted as an ideal for the Khalsa State and imprinted on their seals, coins and banners. The term fateh added to deg and tegh was the expression of Sikhs' belief that the use of tegh (in the last resort, as permitted by Guru Gobind Singh), with the ideal of deg or charity steadfastly cherished, must lead to fateh or victory.

Guru Gobind Singh had introduced the salutation "Waheguru ji ka Khalsa, Waheguru ji ki Fateh" ascribing victory to God. The Khalsa affirmed through this slogan that victory, a gift from God, followed the use of tegh in a righteous cause and adherence to the principle of magnanimity deg, tegh, fateh.

Banda Singh who first occupied territory in Punjab for the Khalsa, had a Persian inscription on his seal which, rendered into English, read: "Kettle and Sword (symbols of charity and power) and Victory and Ready Patronage have been obtained through the grace of Guru Nanak Gobind Singh."

Here tegh (sword) is used as a symbol of victory over tyranny and deg (kettle) as a symbol of ready patronage (welfare) for the good. Both being gifts from the Gurus constituted the governing principles of the polity of the new State. The same Persian inscription incorporating the Sikh ideal of Deg Tegh Fateh was reproduced on the coin introduced by Sardar Jassa Singh Ahluvalia in 1765 after the Khalsa had gained a decisive victory over the Afghans.

The practice continued during the time of Maharaja Ranjit Singh, the first Sikh sovereign of the Punjab as well as in some of the cisSutlej Sikh states which had accepted British suzerainty. Over the centuries the principle of Deg Tegh Fateh has taken a firm root in Sikh psyche and tradition.

The maxim has become part of the Sikh Ardas, prayer which is recited at the end of all Sikh services. Every time when the ardas is offered, blessings of the Lord are invoked for the triumph of the ideal of deg and tegh. In the ardas, Sikhs also recall their past heroes : "They who dwelt on His Name, ate only after sharing their food and provisions with others, maintained the deg and wielded the tegh and sacrificed their lives for the sake of dharma, remember them, Khalsa Ji and proclaim Vahiguru ...."