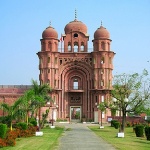 Gurdwara Rori Sahib is located in Eminabad, one and half a kilometre north-west of the centre of the town. Eminabad, an old town is 15 kilometres south of Gujranwala and is a famous town of Gujranwala district in West Panjab, Pakistan.

It is linked to Grand Trunk Road and Eminabad railway station by four-kilometres stretch of metalled road. It has three important historical shrines of the Sikhs.

This sacred shrine marks the site where, according to tradition, Guru Nanak after the destruction of the town had stayed with Bhai Lalo. Here the Guru had to sit and lie on a hard bed of pebbles (small stones) ("rori" or "row-ree" in Punjabi means "pebbles") as alluded to in Bhai Gurdas Varan 1.

An imposing Gurdwara has been built over the place. A large pond and other buildings make it more graceful. A large estate worth Rs.5000 per annum and 9 squares of agricultural land is endowed to the Gurdwara from the era of Maharaja Ranjit Singh. .....More