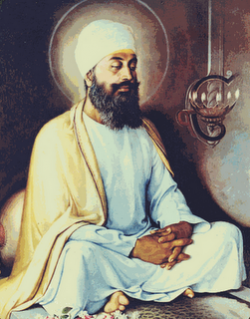 The history of the Sikh Gurus is little known to the world; however this history is rich beyond our imagination. The stories of the ten Gurus and their devotees, called the Sikh are truly inspiring; the lessons to be learnt from reading about their lives, are countless.

In this article, we are going to remember the ultimate sacrifice our 9th Guru gave on the 24th November, 1675.

Fundamentally he was an apostle of peace and carried with him limitless virtues; notably his ability to remain calm and unshaken throughout his whole life. There are many stories of his childhood that indicate his humble personality and the uncompromising love he had for all. Despite being the son of the king of kings (Guru Hargobind Sahib Jee) whilst living in Bakale, Guru Jee worked on the land like ordinary people, re-fusing to take offerings from anyone.

Staying true to the saint-soldier concept ordained by his father, Guru Jee also learnt and mastered swordsmanship, horsemanship and archery. At the tender age of just 13, Tyag Mal Ji marched bravely into battle with his father to protect their village, people and religion from the Mughuls, whom were under the control of Kale Khan.

Some fifty thousand men fought the several thousand brave Sikhs, and Tyag Mal Jee was given the name Tegh Bahadur -’the brave swordsman’ after the valour he displayed on the battlefield.

The Sikhs triumphed and Tegh Bahadur Jee returned to his usual temperament of being deeply immersed in his meditation and prayers. He was also a beautiful poet and along-side his training in military warfare, he became a master of ragas (music). Guru Jee would go on to produce some of the greatest works of poetry seen on Earth and he contributed 116 hymns to the Guru Granth Sahib Jee.

After the Guruship was passed from Sri Guru Hargobind Sahib Jee to Guru Har Rai Jee and then to Guru Harkrishan Sahib Jee, Teg Bahadur Jee was announced as the ninth Guru in the village of Bakale. From there the Guru left the place he had stayed most of his life and began to teach people the ideology of Sikhi and reveal the ultimate truth.

Among the many remarkable things he achieved, he colonised a new city, Anandpur Sahib, where the Khalsa would be created. What happens next in his life is unparalleled in the history of the World, and his son Guru Gobind Singh Jee describes his immeasurable act the following way.

Meeting with the Kashmiri Pandits 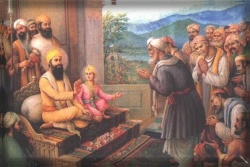 In 1675 India was in a dire state. People did not have religious freedom as we do now, and the tyrannical Emperor, Aurangzeb wished to bring the whole of India under the Islamic fold. Since 1669 he unleashed a horrific policy to bring punishment to those who were non-Muslim.

One group who were becoming increasingly vulnerable were the Hindus. Aurangzeb was quick to realise that if he success-fully converted the Kashmiri Pandits, who were revered among their community, the rest of the people would follow suite and accept Islam.

In an act of desperation and fear, the Kashmiri Pandits came to the abode of Sri Guru Tegh Bahadur Sahib Jee and told him their predicament. They explained that they were given the ultimatum to convert to Islam or accept death.

Guru Jee was deeply concerned by their dilemma and saddened to see freedom to practice their dharma (religion) being threatened. At this point the young (Guru) Gobind Rai entered the darbar (Main Hall) and asked his father why everyone was in such deep thought.

The Guru explained that there was a need for a great soul to face this oppressive regime. Gobind Rai, being only 9 at the time, replied ’Who could be more fit than you father?’

Guru Tegh Bahadur then decided that, accompanied by his most trusted Sikhs including Bhai Mati Das, Bhai Sati Das and Bhai Dayal Das, he would face Aurangzeb and declared that, if he could convert them, than the Hindus would agree to do the same without resistance.

Guru sets out on route to Delhi 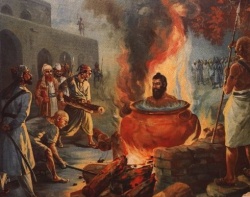 Bhai Dayal Das attains martyrdom by being seated in a cauldron of boiling water.

In the summer of 1675, the four of them set out for Delhi. On arrival they were asked to convert to Islam or else face the penalty of death.

Guru Tegh Bahadur bravely declared that he would rather sacrifice his life than give up his faith or his freedom. The Guru was than kept chained and imprisoned in an iron cage and was tortured using the most horrific methods for 8 days.

Of course the Guru was an enlightened soul and keeping his mind fixated on God, he withstood the torture with no sign of grief or complaint. Upon seeing the Guru’s resolve, the Emperor looked to break his spirit by executing his companions.

Execution of the 3 Sikhs 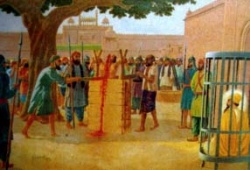 Bhai Mati Das was sawn into two, from head downwards.

First Bhai Dayal Das was brought in front of the Guru and placed in a cauldron of boiling water, he calmly accepted death and merged his soul back with God (Waheguru).

Mughals then decided to kill Bhai Mati Das. They said to him "Brother, embrace Islam and enjoy the pleasures provided by us in this life and in heaven. If you do not embrace Islam, your body will be sawn into two."

Bhai Mati Dass replied, "I can sacrifice hundreds of such heavens for my faith. I see all the happiness in the path of my faith."

After his refusal, the qazis asked him his last wish, to which he replied, 'When I am being cut with the saw, let my face be towards my mentor so that I may behold my Guru till my last breath and he may keep on seeing me so that he may be convinced how happily I reach my last destination."

By the order of the qazis, the executioners sawed Bhai Mati Dass in two.

The qazis then asked Bhai Sati Dass, "Save your life by embracing Islam and live in pleasure." 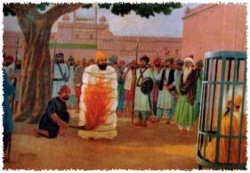 Bhai Sati Dass replied, “You cannot understand that my pleasure and happiness lie only in obeying the command of my Guru. It does not lie in saving this life which must end one day."

At this reply, the executioners wrapped Bhai Sati Dass in cotton, poured oil over it and set fire to him. Bhai Sati Dass remained calm while burning till his last breath and remained true to his Guru.

Finally after peacefully bearing different forms of torture and refusing to show miracles at the request of Aurengzeb, Sri Guru Tegh Bahadur was beheaded in Chandni Chowk, Delhi, India. A note was written by Guru jee and placed around his neck which read ‘I gave my head, but not my faith’.

Now we must also take into consideration Gurbani strongly challenges rituals, idol worship or taking part in any fasts; which are a part of Hindu dharma. So how great was Guru Jee to sacrifice his life, so that others could live a life based on their own religious beliefs.