From SikhiWiki
(Redirected from Pipa)
Jump to navigationJump to search

Bhagat Pipa, (Gurmukhi: ਭਗਤ ਪੀਪਾ)(5th April 1425) also known as Raja Pipaji or Rao Pipa or Sardar Pipa or Sant Pipaji or Pipa Bairagi or Pipanand Acharya, was a mystic poet, Rajput ruler turned saint. He was a devotee of God, a king, a Gurmukh, and a supporter of Gurmat.

His bani is incorporated in the Sri Guru Granth Sahib Ji. He was a prince who renounced his throne in the search of spiritual solace and said that one should search within for God. He said that one's inner self has a relation with God. He disdained the idea of finding God in the outer world in any form. He was a Deity worshipper once, probably of Goddess Bhavani, but when he found God in himself, he discarded all these other notions of society, i.e idol worshipping.

Bhagat Peepa Ji, Bhagat Kabir Ji, Guru Nanak Dev Ji, Bhagat Ravidas Ji, and Bhatts are all the same and all are treated as Gurus and Sikhs bow before the Sri Guru Granth Sahib Ji which includes the teachings of many who had similar thoughts as Bhagat Pipa Ji had about God.

Raja Pipaji was born, as Pratap Rao, at Gagaron, in present-day Jhalawar district of Rajasthan in a Khichi Chauhan Rajput family. His great grandfather King Jaitpal obtained possession of Gagron by killing Kamal-Ud-Din, Governor.[3] Raja Pipaji was successor of Rao Khandwa and ruled Gagron possibly between 1360 to 1385.[3]

He had 12 queens among those Rani Sita was his devout lady and was very dear to him. Sita was daughter of King Haja Solanki of Toda Rai Singh in District Tonk. Her name was Padmavati which was changed to sita after marriage.

He was born at Gagron, in present-day Jhalawar district of Rajasthan, 5th April 1425.

His great grand father named Jaitpal won the Malwa area from muslims and became its king. As Pipa's father died young, so Pipa became king. Because of youthfulness and customs he had 12 to 16 queens. Though he was very rich and had a great personality, he was also a spiritual and Godly person. He was a devotee of the Goddess Bhavani whose idol was enshrined in a temple within the premises of his palace. It is said that the Goddess once told him in a dream to visit Kashi (Varanasi) and receive initia­tion from Bhagat Ramanand

He was a king of Gagron garh, situated at about 50 miles to the east of Kotanagar in the present-day Jhalawar district of Rajasthan State. He was born in a Chauhan rajput family in AD 5th April 1425 (1483 Samvat). According to the British historian of Sikhism, J.D. Cunningham, he was the ninth descendant of Raja Jaitpal. However, Giani Gian Singh, Twarikh Guru Khalsa (Part-1, p. 143) gives 1462 Bikrami as the year of his birth. It is also stated in this work that Pipa was born at Jhala, and spent his entire life at Patan in meditation of God: this Patan town is situated near Jodhpur in Rajasthan. Since Pipa came of a royal family, he enjoyed all the pleasures and comforts of a royal life and his life were full of all sorts of physical enjoyments. In the true royal custom, he married a dozen beautiful maidens who lived with him in his palace as his queens. Inspite of all this, a spark of Divine love was still alive in his heart. He was a devotee of goddess, Durga, the deity in which he perceived the divine reflection. He also took time from courtly cares and pleasures of flesh to spend it in the company of the holy persons. These later persuaded him that the special efforts need to be made to realize God. So he resolved to go to Ramanand to seek spiritual guidance.

Folks say, Pipa went to Kashi, but Ramanand refused to see him in his gaudy robes. Pipa cast off his royal apparel and put on a mendicant’s garment. He returned home after initiation and began to live like an ascetic. At his invitation Ramanand visited Gagron, and the raja lent his shoulder to the palanquin carrying him in a procession.

Some people claim that Pipa met Nanak during journeys but this point is not proven. It is also said that Bhagat Pipa once met Guru Nanak in Toda town. This discovery generates through the Parchai of Anant Dass (who was the grandson of Bhagat Pipa), found by Principal Harbhajan Singh of Chandigarh. In this Parchai Anantdass wrote that the tola of sadhus was going from Pushkar to Kashi and stayed at Toda town. In this tola a Sadhu from the Punjab was looking Godly and great person and according to them that person was Guru Nanak but the fact has not been proven.

It is believed that Pipa lived before Nanak's time and was here on earth at same time as Kabir, Ramanand, Sain etc were.

Pipa finally decided to give up his throne and retire to a life of seclusion and meditation. He went to Dwarka (Gujarat) where Lord Krishna, after the Mahabharata war, had spent the last years of his life. All the twelve wives of Pipa insisted on accompanying him, but he took along only one, named Sita, who was of a pious temperament. He selected a cave for his residence from where he walked daily through a tunnel to the temple of Krishna on the sea coast. The temple is still a popular place of pilgrimage and a fair is held there annually in Pipa’s memory. After what he thought was a personal encounter with the Lord, he gave up idol-worship.

He and his companion-wife started living in a jungle. After a period of penance, he set out roam­ing about the country to serve the common people. He, along with his wife, sang hymns and prayers of his own composition and collected money to be distributed among the poor. He fed the mendicants and treated them as God’s chosen ones.

Once an idol-worshipper (saguna bhakta) Pipa became a worshipper of the Formless One (nirguna devotee).

As he says in his hymn in the Guru Granth Sahib, the body itself is the Supreme Being’s temple (kaiau deval). One need not make stone images of Him and burn incense or light candles in front of them. Pipa composed many hymns in praise of the Lord and sang them along with his wife for seeking alms. The money he received was put to the service of the poor.

Two collections of Pipa’s sayings are known to exist, namely Shn Pipa ji Bani and Sarab Gutaka, both in manuscript form. Pipa Math, a monastery in Dwarka, honours his memory.

Life Study through his Bani

A Gurmukh can easily understand life of Bhagat Pipa's through his Bani, in which he himself tells his beliefs before encountering with Gurmat. Following facts are clear from his Bani:

Within the body, the Divine Lord is embodied.

The body is the temple, the place of pilgrimage, and the pilgrim.

Within the body are incense, lamps and offerings.

I searched throughout many realms, but I found the nine treasures within the body. Nothing comes, and nothing goes;

The One who pervades the Universe also dwells in the body; whoever seeks Him, finds Him there.

Pipa prays, the Lord is the supreme essence;

He reveals Himself through the True Guru.

Peepaa prays, the Lord is the supreme essence; 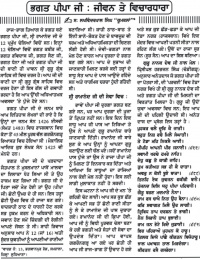 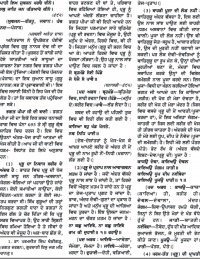 Bhagat Pipa's bani can be found in the following ANG (page) of Guru Granth Sahib:

We are known as Pipavanshi, a family member related to King Pipaji

You can also join us on Facebook page for more info