On this platter are these things 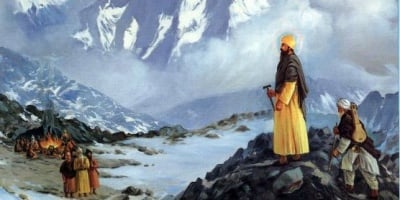 In 2008, we witnessed the mega events celebrating the tricentennial anniversary of the installation of the Guru Granth Sahib, held at Nanded in October 2008. The Granth was installed as the perpetual Guru (spiritual guide) of the Sikhs by the last human-form Guru of the Sikhs, Guru Gobind Singh three hundred years ago.

With Nanded as the nucleus, the celebrations were organized at a global level in which almost every Sikh participated. Major processions originating from different parts of the Indian subcontinent poured into this holy city. The crowds that assembled on the occasion were indeed unprecedented and unmanageable.

The main function which ran over many days was attended by countless dignitaries including the President and the Prime Minister of India. The routes of the processions as well as the entire city were lavishly decorated. Illuminations marked the day, and every Sikh home lit up with candles or electric bulbs.

The Golden temple premises too presented a celestial scene. The Sikh panth organized the whole show, issued Gold and Silver coins, and governments issued postal stamps to mark the occasion. A large number of seminars were organized all over the world, and most Sikh periodicals issued special numbers to pay their homage to the Guru Granth Sahib.

The celebrations covered all this and much more. The enthusiasm of the masses was unbelievable. They once more demonstrated their devotion and commitment to the Guru in unmistakable terms. Sikhs outside India did not lag behind. They came to India in large numbers to pay their homage to the Guru and to express their solidarity with the Panth as well as their desire for a glorious future as Sikhs in the international community. This is indeed a favourable ground situation for any programme aimed at future glory of the Panth.

We have demonstrated to the World that Sikhs believe in Shabad Guru, and as such Guru Granth Sahib is our Guru Eternal, so that there is no place now for 'dehdhari' (human-form) Gurus in Sikh religion. It is possible and necessary to build on this foundation the edifice of a great future. We should not sit back gloating over the pomp and show of celebrations.

Need to share the message of the Shabad Guru

The enthusiasm of the masses should be directed into constructive channels through meaningful programmes. Of paramount importance is the need for sharing the message of Guru Granth Sahib with the rest of the world. This is necessary for salvation of mankind as well as in our own interest. For, we cannot expect an honorable place for us, unless other people understand the message of our Guru and know what we stand for and what Guru Granth teaches.

Volumes have been written on Guru Granth Sahib. Our belief that it is God’s "Word" is unshakeable. Nobody can fathom fully the depth and extent of knowledge, guidance and inspiration it confers, and the ecstasy of its hymms. Guru Arjun Dev has, however, himself summed up its contents in the Mundavani at the end of the Volume thus:

What does it mean?

Emphasis on truth in the hymns is too obvious to be missed. Mere knowledge (gyan) of truth is not enough. It has to be practised in life. Contentment is necessary for happiness. Otherwise one continues to indulge in endless pursuits of worldly riches, amassing wealth through unethical means, grabbing what belongs to others. This does not satisfy one's hunger for more and more.

Greed is insatiable, and leads to misery. It is only contentment that yields satisfaction. The third thing that the Granth offers is Wisdom, an insight into the nature of the universe, and a world-view. The Guru’s approach is positive. The world is real; it is not a dream. Nor is it a place to receive punishment for sins committed in a previous birth. It is a place created by God for man to practise dharma or righteousness.

The human birth is an opportunity to meet the Lord who is immanent in the universe, indicating His love for His creation. So, altruistic deeds or service of mankind without distinction of caste, creed, colour or country is the way to please Him. He is the benevolent Father, and we are all His children, and hence equal. There are no chosen and no condemned people; all are equal before Him. He dispenses justice to all. Equality and justice have to be defended as God's Will. That is the only way to end strife in the world and to ensure lasting peace and happiness in the world.

The Granth Sahib repeatedly lays stress on the above values, and it is incumbent upon us to share these values with our fellow human beings across the world. Celebrations of this 'shatabadi' (anniversary) would be meaningless unless we take some steps in this direction. Some of these could be :

In the end, we must repeat what we have been stressing all along, that the above programmes and other long-term ambitions of the Panth can only be realized through an Apex Body of the Panth with representatives from all parts of the world and from all Sikh organizations.

People look to the SGPC in all matters concerning Sikhs; but this may not be the route forward. The responsibility is global and every Sikh has a part to play. SGPC too has to rise to this challenge The Institute Of Sikh Studies has been actively campaigning for it. Support from other Sikh organizations in India as well as abroad will expedite its setting up. This will facilitate sharing (vand chhakna) of the spiritual food that the Guru has bequeathed to us on the holy platter, with the entire mankind.