Guru Nanak Dev ji's visits to Leh and Kargil districts of Jammu And Kashmir are marked by historical Gurdwaras. 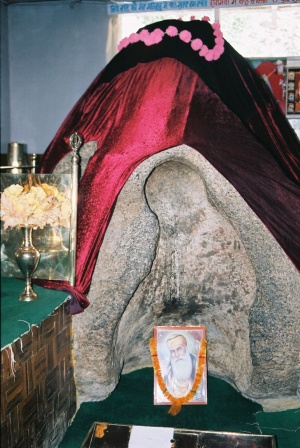 Situated at a distance of 27 Km from Leh city, it was built by Lamas (Buddhist holy men) of Leh in 1517, run by them for over four centuries,In 1948, the Gurudwara Pathar Sahib's maintenance was taken over by the Army.

it is currently also being maintained by the Indian Army. It is prominantly written outside the Gurdwara Sahib "An institution run by the Army". As a kind courtesy of the Army, STD and CSD facilities are available inside the Gurdwara premises. All the Gurpurabs are celebrated here with full enthusiasm.

Built by Buddhist Lamas nearly five centuries ago to commemorate the visit of Guru Nanak, the founder of the Sikh religion, to Ladakh, the Gurudwara Pathar Sahib is visited by Hindu and Sikh devotees, besides tourists. Legend has it that many centuries ago a demon had terrorised the people of Leh. Baba Guru Nanak, who visited the region around 1516 A.D, came to know about the problem and decided to bless them with his sermons. Locals welcomed him with open arms. His growing popularity angered the demon and in a fit of rage, he decided to kill Guru Nanak with a large boulder. The boulder, however, turned into wax as soon as it touched Guru Nanak Dev. Thinking the Sikh Guru must have got killed by the boulder, the demon appeared only to be shocked to find Guru Nanak Dev meditating. He pushed the boulder with his right foot, but as it had already melted into wax, his foot got embedded in it. Realising, Guru's enormous powers, the demon fell at his feet and sought forgiveness Since then, resident Lamas revere the boulder and offer prayers to it.

The sacred stone is covered with a velvet cloth called chola Sahib which is replaced with a new one on Gurpurabs.

In Leh city there is a biggest and oldest tree planted by Guru Nanak Dev ji. It is located in the main bazar at the back side of the main mosque. A board depiciting the history and Nishan sahib has been erected by Sikh Sangat, the tree needs timely maintainence as its condition is deteriorating daily. This tree is also known as Datun Sahib as many people believe that it was the Datun which Guru Sahib planted at that time.

This Gurdwara is built at the outskirts of Kargil city at the bank of Suru River near Iqbal Bridge.

Nanak's concern for the Environment

Sayth Nanak-"...Plant more and more trees to save life..."

Service of Humanity was the mission, thus initiated by the writer of his own profile through Lord TRUE Language of Gurbani, during his stay in Ladakh.

He motivated, & gifted the mission to the Ladakh People, nay! it was, is and will ever remain a mission of Sikhs dedicated to the service of Humanity. Ladhakhies still remember Guru Nanak as Rimpoche Lama ('great jewel or precious holy man') and have an infallible reverence for "Lama Nanak" and his faith in nothing but 'TRUTH'.

After staying at Leh and Kargil Guru Nanak Dev ji then proceded to the Kashmir valley.