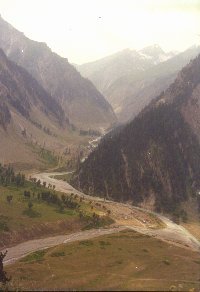 The Mountainous Terrain of Kargil

Kargil town is located at a distance of 204 km from Srinagar, almost midway on the Srinagar-leh National Highway. Most of the villages of the district are located at an average height of 10,000 feet above sea level. It shares the Line of Control (LoC) with POK in the north and borders with Leh in the east and the Kashmir valley in the west. The geographical area of the district is 14,036 sq kms. The district has two tehsils as well as two assembly constituencies, namely Kargil and Zanskar. The climate is very cold and in winter, the highway is blocked for more than six months from Dec. to June every year. The snowfall around Zojila pass and the Drass region is very heavy. The literacy rate is 17.06 per cent - male 29-49 per cent and female 3.21 per cent.

Agriculture is the main occupation and about 91per cent of the population is engaged in it. Wheat and millet are the major crops. Though the district is devoid of industrial units, the development of handicraft has added to jobs and income. The Baltel-Kargil road, linking Kargil with Srinagar is the life-line of the district. Construction of the 230 kms. Kargil-Padam and Bodh Khushboochaktan road are in progress. Tourism is being promoted as an industry after Ladakh was opened to foreign tourists in 1974. Horticulture and forestry are being given special attention. A Co-operative movement is also active in the district.

Kargil is one of the two districts of Ladakh region of Jammu and Kashmir. It came into the limelight on the world map in 1999 during the Kargil war in 1999. Here the majority of the population is of Shia muslims. The majority population has little contact with and no exposure to the outer world including India, hence they are very honest and trustworthy. Kargil includes the world's coldest living region, Drass where tempratures fall below -40° in winter.

Their are two Gurdwara sahibs in Kargil.

Guru Nanak Sahib and Mardana also visited Kargil during their journey to Ladakh via Tibet.