Martyrdom of Guru Arjan in the eyes of non-Sikh historians

Martyrdom of Guru Arjan in the eyes of non-Sikh historians based on an article by (The Late) Prof. Anil Chandra Banerjee* 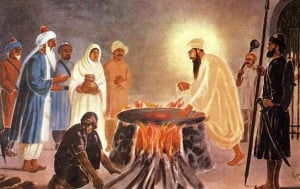 Guru Arjan Dev's subject to torture by the Mughals.

The ‘King of Islam’ (Jahangir) lost no time in fulfilling the expectations of his fundamentalist supporters. Farid Bukhari was appointed governor of the Panjab with unlimited powers. Within a few months of the new Emperor’s accession (October 1605) Guru Arjun was tortured to death (June 1606).

Jahangir has left for posterity a frank account of this ‘important achievement’.

‘In Govindwal...there was a Hindu named Arjun, in the garments of sainthood and sanctity, so much so that he had captured many of the simple-hearted of the Hindus, and even of the ignorant and foolish followers of Islam, by his ways and manners, and they had loudly sounded the drum of his holiness. They called him Guru, and from all sides stupid people crowded to worship and manifest complete faith in him. For three or four generations they had kept this shop warm. Many times it occurred to me to put a stop to this vain affair or to bring him into the assembly of the people of Islam.’

But the Guru had no previous contact with Khusrau, and there could hardly be any ‘preconceived things to be communicated to him or discussions on ‘many matters’ held with him. The prayers, if offered, were meant for the prince’s personal security during his perilous flight, not for his success in his rebellion against his father with which the Guru had no concern at all. There is no mention of monetary aid or prayers in the Emperor’s own account of the incident. (P 203)

Jahangir did not take the trouble of ordering an investigation into the nature or implications of the alleged political misconduct of the Guru. He took immediate action, for he ‘fully knew his heresies.’ The condemnation without a hearing, the ferocity of the punishment, and the specific mention of ‘heresies’ betray the Emperor’s real motive.

Although some details relating to the tragedy are obscure, there is little doubt that Jahangir’s own account in his autobiography, read in the light of the circumstances connected with his accession and the jubilation of the Mujaddid at Guru Arjun’s death, can be interpreted only in one way, viz, it was a classic case of religious persecution.

No student of Mughal history can believe that an unarmed religious teacher - a man of peace who compiled the Adi Granth and composed the ‘Sukhmani’ was a danger to the safety of the Empire in 1606 or that Jahangir could act upon such an illusory fear. ( P. 207)

The role attributed to Chandu Shah in this narrative seems to be exaggerated, although it is possible that he tried to rouse the Emperor’s ire in order to have his revenge on the Guru for the social insult which he had suffered. This is, however, entirely a side issue. The Emperor hardly needed any prodding; even before the Khusrau incident, he was thinking of taking measures against the Guru ‘to put stop to this vain affair or to bring him into the assembly of the people of Islam’. (P. 207-208)

Hari Ram Gupta, another eminent historian, writes in his book ‘History of the Sikhs, Vol. 1’ (1984):

It is certain that Guru Arjun’s martyrdom was mainly a religious case, coupled with local and personal jealousy and envy. Whatever the case might be there is no doubt that Guru Arjun set the noblest example of courage and boldness in resisting the wrongs of mightiest power on earth, and thus sowed the seed which was to bear rich fruit in due course.

The Christian Scholar of the Sikhs Dr.Eaenest Trump says that, “Guru Arjun’s death is the great turning point in the development of Sikh community, as from that time the struggle commenced that changed the entire character of reformatory religious movement.” Shaikh Ahmad of Sarhind expressed utmost delight at Guru Arjun’s murder. In a letter written to Shaikh Farid Bukhari entitled Murtza Khan, the Governor of Punjab, he said: “The execution at this time of the ‘accursed Kafir’ of Goindwall…with whatever motive…is an act of the highest grace for the followers of Islam.” He added that the Hindus should be treated as dogs. Jazia should be imposed upon them and cow slaughter should be allowed in the open. (P 152-153)

Duncan Greenless in his book, ‘The Gospel of the Guru Granth Sahib’ wrote:

When Khusru, Jahangir’s eldest son, had rebelled , the Guru had protected him and given him money for his flight to Kabal. This was presented as sedition done by the Guru, and Chandu persuaded the new Emperor to order him first to expunge all objectionable passages from (Guru) Granth Sahib and then to pay a big fine.

Guru Arjun naturally refused both these demands replying that, to him, all men were friends and he had helped for Akbar’s sake, not for political reasons, and the Guru Granth is the holy Word revealed by God through the Gurus and not a letter in it should be changed. He added that fines are for worldly men, and certainly not for men like himself, apart from worldliness and devoted to the welfare of others. Nor would he allow the Sikhs to collect or pay this fine of two lakhs of rupees..He appointed his little son his successor and went bravely to meet what he knew would be his death. (P. Ixxvii-Ixxviii)

Lieutenant-Colonel Malcolm wrote in his book ‘Sketch of the Sikhs’ (1812):

Guru Arjun ought to be deemed the first who gave consistent form and order to the religion of the Sikhs. He succeeded in uniting that nation more closely, and of increasing their numbers, but his success proved fatal to himself. The jealousy of the Mohammedan government was excited, and he was its sacrifice. (P. 22)

In part from an article from the