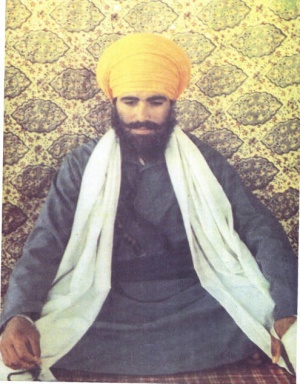 Manbir Singh was born in 1959 in the village of Chaheru, Kapurthala, Panjab. His father Sardar Mohinder Singh was a well to do farmer. Manbir Singh completed his primary education at his village school and passed his 10th grade at a school in the village of Kala Bakra (village of his maternal aunt, Niranjan Kaur). He was later married Bibi Ranjit Kaur. He assisted his father in farming for six years after passing matric.

He was 19 years old at the time of “April 13, 1978 - Nirankari confrontation” when thirteen Sikhs of the Akhand Kirtani Jatha were murdered. This incident left a deep mark on Manbir Singh's thoughts. A retired army officer Giani Joginder Singh who was also son-in-law of Manbir Singh's aunt Niranjan Kaur, encouraged him to get baptised (a Sikh initiation ceremony). In the year of 1979, Manbir Singh along with his wife and his father's younger brother, Karnail Singh, took the baptism from Sant Nihal Singh Harian Wela Wale at the Sodal Gurdwara in the district of Jalandhar in state of Punjab.

In 1981 he was arrested temporarily after heated arguments between him and the then SSP of Jalandhar, GurIqbal Singh Bhular, when the later questioned him about his activities. His uncle Karnail Singh got him released on bail with a personal surety that Manbir Singh would show up at Police station the next day. After this incident Manbir Singh approached Sant Jarnail Singh Bhindranwale and moved to the Golden Temple where he started serving food in the Guru Ka Langar. He became Sant Jarnail Singh Bhindranwale’s personal bodyguard afterwards[4]. His uncle Karnail Singh was arrested when Manbir Singh failed to return to the police station as his uncle had promised.

He survived the 3rd Sikh Holocaust referred to as Operation Bluestar in 1984, because he was not at Sri Harmandir Sahib at that time. He initially left for Pakistan but to take revenge of this attack and to achieve independence from India, he came back. He along with several other like minded youths, including Mr. Harjinder Singh Jinda and Sukhdev Singh Sukha, Mr. Gurdev Singh Debu, Mr. Mathra Singh and Mr. Tarsem Singh Kuhaar etc, established Khalistan Commando Force and Manbir Singh Chaheru was declared its very first Chief General/Commander-in-chief[8]. He fought various battles against Indian security forces afterwards[9]. Manbir Singh Aka Hari Singh setup KCF's military hierarchy, but adhoc groups conducted most operations at the local level[10].

On August 8th 1986, Manbir Singh Chaheru was arrested along with Major Baldev Singh Ghuman (who was later killed on 23rd June 1990 at his own house by police cats,[12][13]) Charanjit Singh and two other Sikhs when about 200 paramilitary troops raided Major Baldev Singh’s farm on the outskirts of Jullundur, in Punjab state[14]. According to the Police, there were two dozen murder cases registered against him by that time. (Publication: Chicago Sun–Times, Date: August 10, 1986, Section: Sunday News, Page: 10). [15] He was captured on the basis of secret information provided to Punjab Police by one of its informers named Sarabjit Singh Ropar.

Manbir Singh Chaheru was kept in various jails in Panjab and later moved to a jail in Bihar. In December of 1987 Police announced that Manbir Singh escaped from Police custody while being transporting him back to Panjab from Bihar, but in fact the police had killed him while he was in the police custody[16], disregarding his body in the Beas River. In Chandigarh the Panjab Police Chief J.F. Rebiero told news reporters that they don't need to worry as Manbir Singh will not come back. [17] The International Human Rights Organization has also concluded that Manbir Singh Chaheru was killed by police after taking him out of judicial lock up. [18]