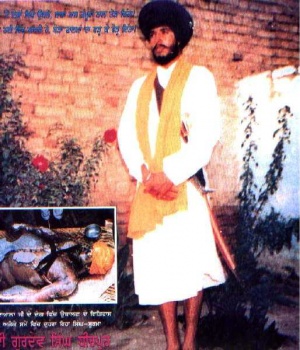 He and his wife Bibi Balvinder Kaur had a daughter and a son. [1].

He started working with Jarnail Singh Bhindranwale after the “April 13, 1978 Nirankari confrontation” when thirteen Sikhs of the Akhand Kirtani Jatha were martyred. Known to be a very close associate of Bhai Amrik Singh, he participated in a peaceful agitation called “Dharam Yudh Morcha” that had originally been launched in August 1982 by Harcharan Singh Longowal. He also attended a Sikh Camp (December 26 to 31, 1983) to get a certification in Sikh religious education.

The infamous 1984 Indian army attack on the Golden Temple, known as Operation Blue Star led to his dedicating his life to a different course. Initially he responded to the attack by participating in attacks on government properties in the countryside. He joined Mr. Manbir Singh Chaheru, Mr. Mathra Singh and Mr. Tarsem Singh Kuhaar and their other companions in establishing the original Khalistan Commando Force. He was made one of the area commanders and desinated "Area Commander Gurdev Singh Debu". He participated in several battles with the Indian Government forces after that.

He also protected Hindu families living in his area of command, providing them with financial help so that they did not have to move out of the state.

In an under-cover operation ( June 1987) the Punjab Police were able to arrest him by slipping some sedatives in his milk. In jail he was ruthlessly tortured to gather information about the Khalistan Commando Force. He was beaten so severely that his bones were broken and twisted. Then his legs were cut open and hot chilies were thrust into the cuts, after which his body was pierced with red hot iron rods.

The police became so frustrated with his silence that they even cut out one of his eyes at this stage. On Friday July 3, 1987, hoping to extract at least some secret information, Punjab police put him in a boiling tub of water where he was ‘’’boiled to death’’’. Later the Police claimed that he was killed in a police encounter. [2][3]. 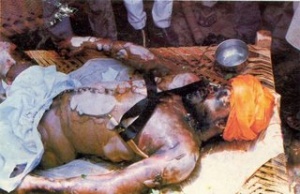 Even in recent times Bhai sahib set an example of Sri Guru Arjan Dev Ji, to endure the most horrific of tortures but not compromise on principles.

His mutilated body was handed over to local villagers when they surrounded the police station with their tractors, trolleys and buses demanding they be given his body to cremate with the proper religious rites.

It has been reported that his entire family was illegally arrested and interrogated afterwards. This was not the end for Bhai Gurdev Singh’s family. The police had been unable to take even a single piece of information from Bhai Sahib and his Shahidi had inspired thousands of Sikh youth. The Indian Security Forces were shocked that they could inflict so much horror on Gurdev Singh Debu without geting even a bit of information; when the details became know they were humiliated by the public reaction.

Bhai Sahib’s family including Bhai Gurdev Singh’s mother, father, brothers, sister and wife were all arrested and tortured. They wanted to know where Bhai Sahib had hidden his weapons. Bhai Sahib’s mother and brothers were hung from the roof to get information but spoke nothing.

Another family became a sacrifice to the Sikh cause, but revealed nothing. [4].

A memorial structure in his memory exists in the form of Sikh Religious Flag called “Nishan Sahib” at the entrance to his home village of Dheerpur - on the Hamira side. A big Sikh religious fair, called "Jor-Mela" is held on his death anniversary on every 3rd of July [5]