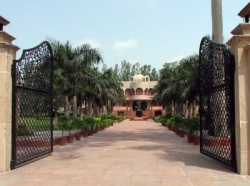 As a gesture of tribute to the gallant soldiers, Punjab Government is in the process of establishing a War Museum of International standard at Ludhiana, consisting of History Gallery, War Heroes Gallery, Uniforms Gallery, Air Force and Navy Gallery, Signal and Medical Corps Gallery, Kargil Gallery and a Audio Visual Theatre.

This International level War Museum, located on GT Road, Ludhiana – Amritsar Highway (NH-1), about 5 KM from Ludhiana Railway Station, near Hotel Amaltas, was instituted in 1999 on a 4 acres plot with a few bare essentials, today stands strong. At the very entrance stands a huge statue of maharaja Ranjit singh sitting proud and magnificent on a throne. Towards the right and left of the statue one can find tanks, apec car, anti-aircraft gun, car scout and an old sukhoi fighter aircraft, along with a massive model of the ins vikrant. Walking up several steps one is lead into the entrance hall, where on the right is a line of portraits of Punjabis, who have been awarded the Paramvir Chakra, Mahavir Chakra and Vir Chakra. On the left is a line of portraits of generals, admirals, and air chief marshals belonging to Punjab. Besides this, the museum comprises several galleries. Many of these are still awaiting material to be displayed.

A huge gallery displays various uniforms of the British era Indian army; air force and navy. They also depict the different stripes, medals and ranks worn by the officials. Another gallery displays portraits and busts of Punjab’s army men who had fought and got laurels in the three wars in 1948,‘65, and ‘71. The six busts that stand in the gallery are of officers who had received Victoria Cross. Yet another attraction of this museum is the light and sound show, which, through the effects of light and sound, depicts war of independence and the role of Punjabis in it. A sonnet lumiere (Light & Sound Show) on permanent basis has been installed at the War Museum to perpetuate the memory of those brave sons of the motherland, who have sacrificed their lives in the freedom struggle of India with an aim to create sense of patriotism and nationalism among the people of Punjab, especially younger generation.

It covers complete Kargil war, with brief history of Kargil, Maskhoh Valley, Darass, Batalic and Kaksar area with map and huge blow up depicting the true scene of war. It also has a Diorama of Operation Vijay and rotating translite-containing photographs of gallantry awardees. A Touch figure Multi-Media Kiosk for detailed information has also been installed in this gallery.

This Gallery contains Diorama of 1st and 2nd battles of Panipat and Battle of Aliwal (Anglo Sikh War) and Blowups of Rama Ravna Yudh, Alexander and Porus, Maharaja Sher singh and Sardar Baghel Singh along with their great warriors. The Gallery is equipped with portraits of Sardar Jassa Singh Ahluwalia, Nawab Kapur Singh, Talking Soldiers of Krishna, Gupta, Mughal and Sikh era. Muti-Media kiosks have been installed for detailed information.