Mahant Bhai Asa Singh Ji 'Seva Panthi' (December 9, 1893 - January 1, 1974) was a great soul, a dynamic religious leader and a truly honorable saint. He was the 11th Spiritual descendant of Bhai Kanhaiya Ji and was anointed as a Mahant of Tikana Bhai Jagta Ji Sahib, Goniana Mandi [1] on the 17th day after the passing of Mahant Bhai Gulab Singh Ji as per tradition. That blessed day was May 8, 1950. He was known as a great propagator of Gurmat as preached by the Sikh Gurus. He was a great driving force behind the project to expand the Tikana Sahib at Goniana Mandi, Punjab. 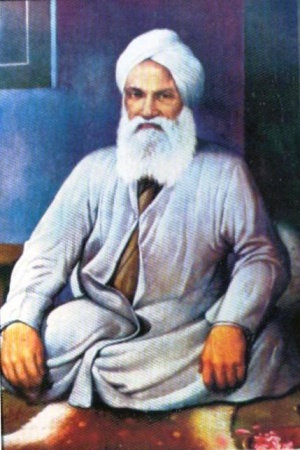 Mahant Bhai Asa Singh Ji was an effulgent man, thoroughly virtuous, purely continent and a man of his word. He had an innate ability to live his daily life as per the teachings of the Gurus, as an embodiment of Gurmat and every act of his reflected exactly what he preached to the sangat. He was so unassuming that one could not tell that he was a proficient scholar. Singing praises of God, listening to Kirtan and the recitation of the Holy Word was his sustenance. His joyousness was visible when he sat in the Holy congregation everyday and immersed himself in the Gurbani Kirtan. Initially he started reciting the Kirtani 'Asa Di Var' in the ambrosial hours of dawn, but a few years later he started the practice of reciting the entire 'Sukhmani Sahib' to the music of the harmonium and the tabla, with perfect poise and unflinching focus. This routine he carried on till his final day.

Mahant Sahib's mission in life, as a true 'Seva Panthi', was to follow in the footsteps of the Sikh Gurus, to propagate the Sikh way of life. He was completely absorbed in the work of preaching Sikhism to the masses in Punjab. He frequently traveled all over India visiting the sangat and inspiring Sikhs to imbibe true Sikh qualities and to live a holy life. Beyond his duties as a preacher, he was a great humanitarian and loved to serve the members of the Sangat or anybody else that came to him, seeking his assistance. Comforting the poor and helpless was his second nature. He had an inordinate amount of patience, when listening to the anguish and worries of the distressed. He always offered a kind ear, expressing sympathy and suggesting ways to alleviate their pain and helped in bringing them peace. He was always ready to provide an appropriate shabad from the Gurbani to recite and even volunteered to mediate in familial disputes or other community matters to bring about harmony. He was a pleasant, good natured and a generous man, who sincerely helped the needy, through either a physical endeavor, spiritual advice or with financial resources of the Tikana Sahib. People who approached him with expectations, were never denied. He always addressed the sangat's domestic, financial or health problems like a kind benefactor, earnestly. He always had a solution for them.

He had a very lengthy, regular and demanding self-prescribed daily routine. He was a very early riser as he slept very little. He woke up every morning at 1.00 AM and immersed himself in Naam Simran. Till 3.00 AM he would complete the prescribed Nitnem, and in addition, Guru Arjan Dev Ji's composition of 'Baavan Akhri' and by 4.00 AM he would complete his early morning routine to join the Sangat in the Darbar Hall. His first task at the Darbar Hall was to do Chaur Sahib seva of the Guru Granth Sahib and at the same time join the sangat in the recitation of the Japji Sahib, Jaap Sahib, Savaiyye, Chaupai and Anand Sahib. He would then sit on the dais with the harmonium and then musically recited the entire Sukhmani Sahib. The rest of the holy congregation also joined him in this recitation. The whole of the Sukhmani Sahib recitation was completed before dawn and was then followed by kirtani Asa Di Var. Next as per tradition, Katha, or the exegesis of Sri Guru Granth, which is an essential part of a daily congregation's progam, began. Right from 4.00 AM till the end of the congregation and until the Ardas, Mahant Sahib waited upon the Guru Granth Sahib with perfect poise and his legs crossed. After the congregation, he found great pleasure in serving meals to newcomers to the congregation. He rarely slept during the day, and if he did, it would be in the summer after his lunch. For the rest of the day he would sit in his room with a large pillow supporting his back and meditating and doing simran. Besides entertaining members of the sangat who needed his assistance and welcoming guests who would come to pay their respects, he would go back to the Darbar Hall for the evening divan (service), sitting for the entire service. Later, he would have a light dinner and retire for the day.

His Interests and Accomplishments

In his lifetime, he rendered enormously great service to devotees and guests alike, especially the poor. He loved finding solutions for the toughest situations and always came up with perfect solutions to people's problems. This was his nourishment. For this reason he was always thinking of ways to make the Tikana Sahib a heavenly and spiritual place, with all kinds of comforts for visitors, including huge langar halls, a historical museum, a charitable hospital, a free walk-in clinic, a school for kids, a gurmat and numerous rooms to allow visitors to stay overnight. He treated everybody kindly, whether it was Partap Singh Kairon, the chief minister or a poor humble devotee.

Mahant Sahib had a special interest in farming and visit the Tikana's farm regularly and frequently sang shabads of the the Lord's benevolence when he would see rain clouds.

His face was radiant when he was in the company of elderly men of letters, as he would engage in wonderful discourses with them, in subjects ranging from the mortality of the human body to man's ego and man's morality and ofcourse the gurbani. He loved to have visitors that had respect and love for the Gurbani and were humble.

Mahant Sahib had great regard for both his humble disciples, but finally, after giving it a lot of thought, he chose Bhai Tirath Singh Ji to follow him as the 12th Mahant of the Tikana Sahib. Mahant Sahib lived for about a year after anointing Bhai Tirath Singh as his successor and on January 1st, 1974, his soul left his mortal form to merge with the Supreme Soul.