Mahant Tirath Singh Ji 'Seva Panthi' (February 12, 1925 - January 14th, 2008) was the 12th spiritual descendant of Bhai Kanhaiya Ji. He was a true saint and gnostic, and a soul of a very high order. He perceived the Almighty immanent in His creation and was always absorbed in Him. He was a very kind and generous humanitarian. He was extremely knowledgeable and his true genius showed in his spiritual and religious discourses. He was so imbued with Divine Love, that often during his spiritual discourses, while talking about Almighty God or the 10 Gurus, or narrating a devotional story of the Bhagats, tears would well up in his eyes. 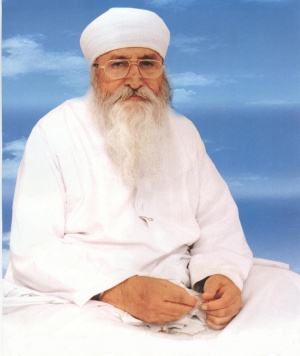 Mahant Sahib was a true practitioner of equity. When asked to assist in resolving matters of the Sikh Panth or by a member of the Sangat, he would present ideas that almost reminded one of the exactness of divine justice. It was no wonder that he was venerated by politicians, religious leaders, preachers, householders and accomplished professionals, alike.

He had a very soft corner for those in pain and would immediately ask his Sevadar to produce a copy of a particular shabad, or would recommend the recitation of a particular bani, or would perform an ardas. He had a kind for word for everyone he met and especially appreciated those that he recognized as having true devotion to Vaheguru and were truthful. That is why everyone who came to know him, in India or abroad, in the United Kingdom or the United States or elsewhere, honored him as a genuine 'parupkari'.

Mahant Sahib was born on February 12, 1925 in the village Jandan Wala, in district Mianwali, in the North Western part of the Punjab province, now in Pakistan. He was born to Bhai Tara Singh, a well known devout Sikh of exemplary moral character, who had unwavering faith in the Gurbani, and who besides his Nitnem, would recite upwards of 5 Sukhmani Sahib paaths everyday.

Mahant Sahib, early in his childhood was enrolled in the local school where he was taught to read and write Urdu. He was an excellent student and an avid sportsman, especially excelling in Volley Ball. He then passed his Matriculation examination and the 'Gyani' studies, which is equivalent to a B.A.(Hons) in Punjabi, with honors.

His life took an uncommon turn at the age of 15. An honored saint Sant Bhai Asa Singh Ji visited his father, Bhai Tara Singh's home and while there, his kind eyes came to rest upon young Bhai Tirath Singh, who was at the time not keeping good health. Sant Bhai Asa Singh Ji who was always kindhearted and nurturing, asked Bhai Tara Singh if he could take Bhai Tirath Singh with him to his Dharamsala at Noorpur. He promised to take care of him.

So with his father's consent, Bhai Tirath Singh came to Noorpur and was presented to then Mahant of the dharamsala, Mahant Bhai Gulab Singh Ji. Sant Bhai Asa Singh Ji requested Mahant Gulab Singh Ji to take this exceptional young man under his wing and to bring him up. At the Noorpur Seva Panthi asthan, young Bhai Tirath Singh ji learnt Gurbani, memorized several Banis, continued advancing his education and learnt the protocols, mannerisms and traditions of the dharamsala.

There he met and was inspired by many prominent Sadhus, who gave his life a spiritual meaning and helped him to imbibe the Divine Word, equity, and the spirit of rendering humanitarian service. He learned how to practice celibacy, modesty and purity. In addition, there was an unending flow of religious scholars, theologists, poets and raagis, who would come to the Dharamsala to meet with with Mahant Gulab Singh Ji.

These new associations and contacts molded his thoughts giving him new insight into the spiritual, religious, social and practical aspects of life. His perception of things, distinguishing right from wrong, truth from untruth, reality from falsehood, changed dramatically. He was able to discern the beauty of righteousness from the ugliness of false ego and illusory Maya. Divine truths were being revealed to him and he now began to understand the path before him. Imbued with Divine love, he soon decided to follow the Gurmat Maryada and the ways of pure and holy souls around him.

Induction into the 'Seva Panthis'

Seeing young Bhai Tirath Singh evolve into a pious soul, Mahant Gulab Singh Ji, prophesized that he would acquire more knowledge and spiritual wisdom and that one day he will shine like a bright star and will be known for his great spirituality and divine knowledge. He will also enlighten the sangat with discourses from the Gurbani and provide them with practical insights on how to live a life of purity as taught by the scriptures.

On one occasion, while Mahant Bhai Jawahar Singh Ji of the Mitha Tiwana Seva Panthi dera was visiting, he foretold that young Bhai Tirath Singh will be initiated into the Seva Panthi fold by Sant Bhai Asa Singh Ji and under his discipleship he will be establish several educational, charitable and religious institutions. All of these prophecies came true and dozens of institutions, large and small, were founded and subsequently flourished under the leadership and benevolent guidance of Mahant Tirath Singh Ji.

Mahant Gulab Singh Ji and Mahant Jawahar Singh Ji arranged for young Bhai Tirath Singh to attend Gurmat Taksal at Dera Sant Bhai Amir Singh, Satto Wali Gali, Amritsar, to learn etymological annotation, philology and Gurbani grammmar from Sant Amir Singh Ji Seva Panthi, who was the most well renowned scholar and annotator of Sikh Scriptures of his time. He also was introduced to and later lived with Sant Bhai Nischal Singh Ji, the first President of the All India Seva Panthi Addan Shahi Sabha, Amritsar, and acquired a good deal of theological knowledge and experience from him.

After the partition of India, Mahant Bhai Gulab Singh Ji, brought everyone to East Punjab where in 1950 he established the Noorpur Dera, known as Tikana Bhai Jagta Ji at Goniana Mandi, Bathinda. Soon after Mahant Gulab Singh passed away giving the reins of the Tikana Bhai Jagta Ji to Mahant Bhai Asa Singh Ji. Mahant Bhai Asa Singh Ji continued preaching the Gurbani to the sangats in India and following in the footsteps of Mahant Gulab Singh Ji, he became a very influential personality within the Sikh Panth, brilliantly continuing his work.

After rendering a distinquished service of 23 years, Mahant Asa Singh Ji decided to hand over the reigns to a successor. In 1973, he had three disciples, Sant Bhai Tirath Singh, Sant Bhai Kahan Singh and Sant Bhai Harpal Singh. Sant Bhai Kahan Singh passed most of his time in the attendance of his master, Mahant Asa Singh Ji, while Sant Bhai Tirath Singh Ji mostly attended to missionary duties outside the Tikana, preaching Gurbani all over India. Both were very close to Mahant Ji's heart and he showered blessings upon them equally. When the situation for succession arose, both disciples suggested that the other be chosen for this great honor.

Mahant Asa Singh Ji finally chose Sant Bhai Tirath Singh to succeed him on on Jan 14, 1974, at a huge gathering at the Tikana Bhai Jagta Ji, in the presence of several eminent Seva Panthi Sadhus and Sadhus of other Sampradas, Mahant Asa Singh Ji performed the Tilak ceremony, and anointed Sant Bhai Tirath Singh as the Mahant of the Tikana, at the age of 47.

Mahant Sahib being a true philanthropist, accomplished an immense amount in his lifetime, started and supported numerous prestigious institutions in the field of education, medicine, social welfare and the upliftment of the poor.

On the evening of January 14th, 2008, upon receiving a call from Vaheguru, after entertaining a crowd of almost 55000-60000 people at the Tikana Sahib, after celebrating the birth anniversary of Baba Jagta Ji, distributing gifts to the Sangat, anointing his successor by performing the Tilak ceremony, he saw the last members of the sangat leave and almost as if by design, departed this world to go and sit on his appointed seat besides the Almighty Vaheguru.

Tikana Bhai Jagta Ji, Goniana Mandi, Bathinda is the head quarters of all Seva Panthi Tikanas. There are 40 such Tikanas in North India. Mahant Baba Tirath Singh Ji was the President of the Seva Panthi Addan Shahi Society (Regd.) Amritsar and the chief Sarparasth of Tikana Bhai Jagta Ji Sahib. He chose Mahant Baba Kahan Singh Ji, the current Chief Sarparasth of the Tikana Sahib, to succeed him as the 13th spiritual descendant of Bhai Kanhaiya Ji.

Mahant Sahib spent his entire life studying Sikh scriptures and performing katha in gurdwaras all over the world. He showed his typically wonderful generosity in writing several books like the famous 'Jap Bodh' and exegesis on Sidh Gosht and Asa Di Var and even had his Katha on Japji recorded and distributed all the materials free of cost all over the world. His katha on Japji Sahib was acclaimed worldwide by the most learned of Sikh scholars and Sikhs all over the world clamored to get a hold of the 12 CD set. This Katha is now available on the internet on sites like gurmatveechar.org, gurbaniupdesh.org and proudtobesikh.com.