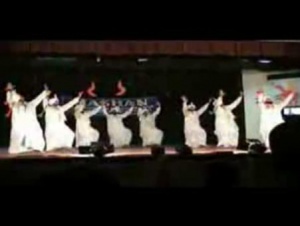 Jhumar or Jhoomar is a lively form of music and dance that originated in the Punjab region in Pakistan, mainly in Balochistan (Pakistan) & Sandalbar areas. It is slower and more rhythmic form of bhangra. Jhumar comes from Jhum - which means swaying. The songs evoke a quality which reminds of swaying. Though the content of these songs is varied- they are usually love with emotional songs too. The Jhummar is a dance of ecstasy.

Jhumar is a folk dance performed during the harvest season in Punjab. It is a living demonstration of the happiness of men. The dance is mostly performed by the tribal Sikh (like Labanas) professional acrobats and has yet not been taken to heart by all Punjabis.

Originally a Baluchi tribal dance which was carried to India by traders. It has become very much a part of Punjab folk heritage. It is a dance of graceful gait, based on specific Jhumar rhythm. The Jhummar is a dance of ecstasy. It is a living testimony of the happiness of men. Any time is Jhummar time especially during Melas, weddings and other major functions and celebrations. Performed almost exclusively by men, it is a common sight to see three generations - father, son and grandson - dancing all together. There are three main types of jhummar, each of which has a different mood, and is therefore suited to different occasions. 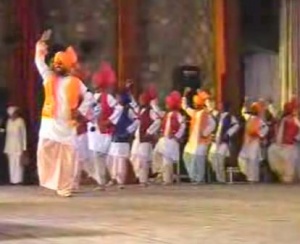 The costumes are the same as that of the Bhangra. It is danced to the tune of emotional songs without any acrobatics. The dancers dance around a single drummer who stands in the center. The movement of the arms only is considered the dance's main forte. The dancers' feet are moved forwards and then backwards, in unison, while turning to the left and to the right to the beat of the singers and drummer, sometimes the dancers place their left hand below their ribs on their left hip as they gesticulate with their raised right hands while circling the drummer in a wide circle keeping up a soft, sibilant chorus as they dance. From time to time a soloist will move toward the center of the circle and showcase his skills. Or two or three dancers will move to the center and mimic planting seeds - bending forward and then straightening up and throwing their left arm in an arc over their head and in the next move they mime thrashing grain, The dancers of this dance let-off a sound, "chzi chzi" (which sounds very much like a tamborine being shaken) in tune with the beat of the dance which adds to its grace. This dance has also been integrated into Bhangra.

This dance does not tire out its performers and it is normally danced on moonlit nights in the villages away from the houses and homes. Today it is danced mostly by tribal Sikh professional acrobats having not yet being adopted by all Punjabis.

We did some minor research on where Jhumar is currently being practised, as Jhumar seems to have almost dissappeared. Luckily Phokhar Singh from the punjab has performed at Patiala's Panjabi University's annual Folk-music Festivals as the guest of the V.C. Dr. Jasbir Singh Ahluwalia.

After the partition of the Panjab most of the practioners of Jumar moved away, but Phokhar Singh (1916-2002) learned Jhummar from his uncle and had danced it since. Before his death he taught the dance to students at D.A.V college, Jalalabad, Punjab. At the time the octogenarian's joints may have protested but as you can see in the video dancing was still in his blood.

We would like to see other colleges adopt Jhummar the way they have adopted Bhangra and Gudda forming competing college teams. If you are aware of any college which has a Jhummar Team, let us know we would like to see some photographs here.

Click on the links below to see the Jumar being performed.