From SikhiWiki
(Redirected from Jehangir)
Jump to navigationJump to search 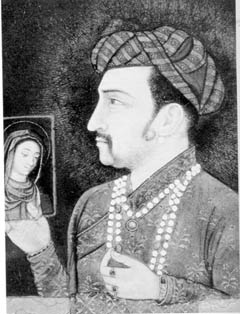 Jahangir (August 31, 1569 to october 28, 1627) was the ruler of the Mughal Empire and India from 1605 until 1627. He signed a treaty with the British East India Company promising their merchants preferential treatment, opening the Indian subcontinent to Britain for the first time.

Jahagir was responsible for the execution of the fifth Master, Guru Arjan Dev in 1606. He wrote the following in his memoirs called Tuzak-i-Jehangiri; "At Goindwal on the banks of the river Beas, lived a Hindu, Arjan by name, in the garb of a Pir or Sheikh. Thus, many innocent Hindus and even foolish and ignorant Muslims he brought into his fold who beat the drum noisily of his self-appointed prophethood. He was called Guru. From all sides, worshippers came to offer their homage to him and put full trust in his word. For three or four generations, they had warmed up this shop. For a long time I had harbored the wish that I should set aside this shop of falsehood or I should bring him into the fold of Islam."

Jahangir further writes; "In these days, Khusro (Jahangir's rebel son) passed through this way. The foolish person resolved to call on him. Khusro halted for a time at this place and this man came to see him and discoursed with him on many matters and also applied with saffron on his forehead what the Hindus call kashkeh (tilak) and consider a good omen. When I heard this account personally, I knew about his false pretenses. So I ordered that he be brought into my presence, that his property be confiscated and his sons and other possessions be made over to Murtaza Khan and he be dealt with in accordance with the political and common law of the land."

He was called Salim at birth. Prince Salim succeeded to the throne on the eighth day after his father's death. He took the name Jahangir and began his 22-year reign at the age of 36. Having seized power, he had to fend off his own son Prince Khusraw's claim to the throne. Khusraw was defeated and as a punishment, his eyes were taken out.

Jahangir married his twentieth and last wife, the extremely beautiful and intelligent Mehr-un-Nisa, in May 1611. She was the widow of Sher Afghan Quli Khan, one of Jahangir's lords, who died under questionable circumstances. Mehr-un-Nisa was given the title of Nur Jehan on her marriage to Jahangir.

A good writer, lover of wildlife

Jahangir was a good writer and loved nature. He recorded all sorts of wildlife in his autobiography Tuzk-e-Jahangiri. He liked paintings and collected many of them in his palace. Some of them are still found in museums.

Jahangir was fond of ease and comfort. He was an alcoholic and could be found day and night with wine goblets in his hands. He was also susceptible to the influence of others, a weakness exploited by many. Because of his constantly inebriated state, Nur Jehan became the actual power behind the throne.

Expectation of the fundamentalists

At the start of his regime many staunch Sunnis were hopeful, because he seemed less tolerant to other faiths than his father had been. At the time of his accession and the elimination of Abu'l Fazl, his father's chief minister and architect of his eclectic religious stance, a strong orthodox nucleus of noblemen had gained power in administration. It was only those who were seen as a threat to the state, with their popularity making them even more dangerous.

While Sunni Islam was the state religion, there was widespread pressure to convert; indeed, Jahangir specifically insisted on his nobles that they "should force Islam on anyone." In the first century of Islamic expansion this attitude was taken partially because of concerns that an absence of non-Muslims would deprive the state of a valuable source of revenue.

However, as the jizya was imposed by Jahangir, there might have been more behind this policy of toleration than mere economic reasoning. Jahangir was certainly willing to engage with other religions. Brahmins on the banks of the Ganges received gifts from the emperor, while following a meeting with Jadrup, a Hindu ascetic, Jahangir felt compelled to comment that "association with him is a great privilege."

He enjoyed debating theological subtleties with Brahmins, especially about the possible existence of avatars. Both Sunnis and Shias were welcome at court, and members of both sects gained high office. When drunk, Jahangir swore to Sir Thomas Roe, England's first ambassador to the Mughal court, that he would protect all the peoples of the book. Many contemporary chroniclers were not even sure quite how to describe his personal belief structure.

Roe labelled him an atheist, and although most others shied away from that term, they did not feel as though they could call him an orthodox Sunni. He relied greatly on astrologers, though that was not seen as unusual for a ruler at the time, even to the extent that he required that they work out the most auspicious time for the imperial camp to enter a city.

He died in 1627 and was buried in Shahdra, a suburb of Lahore, Punjab,Pakistan. Jahangir's great mausoleum still exists and is a popular tourist attraction. He was succeeded by his son, Shah Jahan.