Akbar, widely considered the greatest of the Mughal emperors, was only 14 when he ascended the throne in Delhi, following the death of his father Humayun.[3] He was descended from Turks, Mongols, and Iranians — the three peoples who predominated in the political elites of northern India in medieval times.[4] It took him the better part of two decades to consolidate his power and bring parts of northern and central India into his realm. During his reign, he reduced external military threats from the Afghan descendants of Sher Shah by waging wars against Afghan tribes, and at the Second Battle of Panipat he defeated the Hindu king Samrat Hemu Chandra Vikramaditya, also called Hemu.[5][6] The emperor solidified his rule by pursuing diplomacy with the powerful Rajput caste, and by admitting Rajput princesses in his harem.[5][7]

Akbar was an artisan, artist, armorer, blacksmith, carpenter, emperor, general, inventor, animal trainer (reputedly keeping thousands of hunting cheetahs during his reign and training many himself), lacemaker, technologist and theologian.[8] His most lasting contributions were to the arts. He initiated a large collection of literature, including the Akbar-nama and the Ain-i-Akbari, and incorporated art from around the world into the Mughal collections. He also commissioned the building of widely admired buildings, and invented the first prefabricated homes and movable structures.[8] Akbar began a series of religious debates where Muslim scholars would debate religious matters with Sikhs, Hindus, Cĝrvĝka atheists and even Jesuits from Portugal. He founded his own religious cult, the Din-i-Ilahi or the "Divine Faith"; however, it amounted only to a form of personality cult for Akbar, and quickly dissolved after his death leaving his wife behind

Humayun's untimely death in 1556 left the task of further imperial conquest and consolidation to his thirteen-year-old son, Jalal-ud-Din Akbar (r. 1556-1605). Following a decisive military victory at the Second Battle of Panipat in 1556, the regent Bayram Khan pursued a vigorous policy of expansion on Akbar's behalf. As soon as Akbar came of age, he began to free himself from the influences of overbearing ministers, court factions, and harem intrigues, and demonstrated his own capacity for judgment and leadership. A "workaholic" who seldom slept more than three hours a night, he personally oversaw the implementation of his administrative policies, which were to form the backbone of the Mughal Empire for more than 200 years. He continued to conquer, annex, and consolidate a far-flung territory bounded by Kabul in the northwest, Kashmir in the north, Bengal in the east, and beyond the Narmada River in central India--an area comparable in size to the Mauryan territory some 1,800 years earlier.

Akbar built a walled capital called Fatehpur Sikri (Fatehpur means Fortress of Victory) near Agra, starting in 1571. Palaces for each of Akbar's senior queens, a huge artificial lake, and sumptuous water-filled courtyards were built there. The city, however, proved short-lived, the capital being moved to Lahore in 1585. The reason may have been that the water supply in Fatehpur Sikri was insufficient or of poor quality, or, as some historians believe, that Akbar had to attend to the northwest areas of his empire and therefore moved his capital northwest. In 1599, Akbar shifted his capital back to Agra from where he reigned until his death.

Akbar adopted two distinct but effective approaches in administering a large territory and incorporating various ethnic groups into the service of his realm. In 1580 he obtained local revenue statistics for the previous decade in order to understand details of productivity and price fluctuation of different crops. Aided by Todar Mal, a Rajput king, Akbar issued a revenue schedule that the peasantry could tolerate while providing maximum profit for the state. Revenue demands, fixed according to local conventions of cultivation and quality of soil, ranged from one-third to one-half of the crop and were paid in cash. Akbar relied heavily on land-holding zamindars. They used their considerable local knowledge and influence to collect revenue and to transfer it to the treasury, keeping a portion in return for services rendered. Within his administrative system, the warrior aristocracy (mansabdars) held ranks (mansabs) expressed in numbers of troops, and indicating pay, armed contingents, and obligations. The warrior aristocracy was generally paid from revenues of nonhereditary and transferrable jagirs (revenue villages). 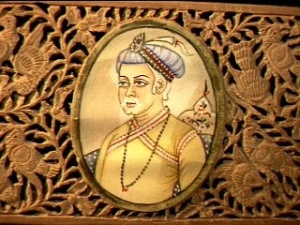 An astute ruler who genuinely appreciated the challenges of administering so vast an empire, Akbar introduced a policy of reconciliation and assimilation of Hindus (including Maryam al-Zamani, the Hindu Rajput mother of his son and heir, Jahangir), who represented the majority of the population. He recruited and rewarded Hindu chiefs with the highest ranks in government; encouraged intermarriages between Mughal and Rajput aristocracy; allowed new temples to be built; personally participated in celebrating Hindu festivals such as Deepavali, or Diwali, the festival of lights; and abolished the jizya (poll tax) imposed on non-Muslims. Akbar came up with his own theory of "rulership as a divine illumination," enshrined in his new religion Din-i-Ilahi (Divine Faith), incorporating the principle of acceptance of all religions and sects. He encouraged widow re-marriage, discouraged child marriage, outlawed the practice of sati, and persuaded Delhi merchants to set up special market days for women, who otherwise were secluded at home. By the end of Akbar's reign, the Mughal Empire extended throughout most of India north of the Godavari River. The exceptions were Gondwana in central India, which paid tribute to the Mughals, Assam in the northeast, and large parts of the Deccan.

Akbar's empire supported vibrant intellectual and cultural life. A large imperial library included books in Hindu, Persian, Greek, Kashmirian, English, and Arabic, such as the Shanameh, Bhagavata Purana and the Bible. Akbar sought knowledge and truth wherever it could be found and through a wide range of activities. He regularly sponsored debates and dialogues among religious and intellectual figures with differing views, and he welcomed Jesuit missionaries from Goa to his court. Akbar directed the creation of the Hamzanama, an artistic masterpiece that included 1400 large paintings. 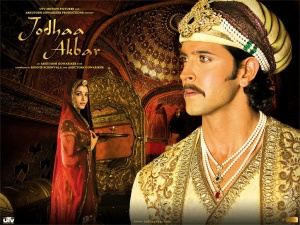 In this scene a picture released to advertise their movie of the Emperor who met with Guru Nanak the splendor of the Mughals is clearly pictured. Too bad the director's had not bothered to read the sikhiwiki article comparing Sikh, Mughal and Hindu religions where they could have read of the moustache of a Mughal never covering the lip as here in the picture from the film.