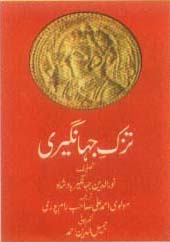 Tuzk-e-Jahangiri or Tuzk-i-Jahangiri is the autobiography of Mughal Emperor Nor-u-Din Muhammad Jahangir (1569-1609). Also referred to as Jahangirnama [1], Tuzk-e-Jahangiri is written in Persian, and follows the tradition of his great-grandfather, Babur (1487-1530), who had written the Baburnama; though Jahangir went a step further and besides the history of his reign, he includes details like, his reflections on art, politics, and also information about his family.

Jahangir was a good writer and loved nature. Jahangir recorded detailed description about wildlife in his autobiography. Jahangir admired paintings and collected them in his palace. Many of them survived and are found in museums around the world.

The text details the first nineteen years of his reign, but gave up the writing of his Memoirs in the seventeenth year of his reign. He then entrusted the task to Mu‘tamad Khĝn, the author of the Iqbal-nama, who continued the Memoirs to the beginning of the nineteenth year. From where, it was taken up by Muhammad Hadi, who continued it to Jahangir's death. It forms a important reference point for the era along with his father, Akbar's, Akbarnama. First important printed version of 'Jahangirnama', was by, Sayyid Ahmad printed at Ghazipur in 1863 and at Aligarh in 1864 [2]

Jahangir’s autobiography also reflects the royal ideology of Jahangir’s views on various political, religious and social issues. Within the memoir, he noted many of his local level legislative policies in his large empire consisting of all of modern day India. Among them were his decrees to manage and regulate the jagirdars. Jagirdars were holders of the jagir, the emperor’s land grant title. The jagirdars were to take the income of the land and use it mainly to finance the maintenance of the troops and to address the town needs. Jahangir made various attempts to halt corruption within the jagirdars. He prohibited each of them from using the money for personal profit by ordering that part of the land income to go to hospitals and infirmaries and for each town to be equipped with religious buildings according to the religion of that area. Jahangir also kept the jagirdars from gaining interest in family or land riches by ordering for jagirdars to seek his approval before marrying someone from the town they ruled in.

In Goindwal, on the river Beas, lived a Hindu named Arjan who wore robes of worldly dignity and high spiritual order. Many simple minded Hindus and ignorant Muslims* too, had been fascinated by his ways. He was noised about as a spiritual master and they beat a drum of his prophetship and called him the enlightener. From all directions shoals of people would come to him and express great devotion. This busy traffic had been carried on for three or four generations** For years it was coming to my mind that either I should put an end to this false traffic and imposturous shop or I must bring him into the fold of Islam. At last during the days when Khusrau passed along the road to Goindwal, this insignificant fellow made up his mind to see him. He discussed some preconceived things with him and made on the forehead of the prince a saffron mark which is called 'Tilak' by the Hindus and is considered an auspicious omen. This incident was reported to me. I was already aware of the Guru's false cult. I therefore ordered him to be arrested and made over his household and family to Murtza Khan. Having confiscated his property I issued orders that he should be imprisoned, and tortured to death under some political pretext. Two other persons named Raju and Amba had under the instigation of Khawaja Sera Daulat Khan committed oppression and tyrannies over the people during Khusrau's march towards Lahore. I ordered that Raju be hanged and Amba, who was a very rich man, be fined a Lakh and fifteen thousand rupees. About this money I ordered that it should be spent on gunpowder and for charitable purposes. (Tuzk-e-Jahangiri. page 35 Nawalkishore Press, Lucknow)

Let us now consider the points one by one. Levying taxes is the most serious crime that can be brought against rebels and if the Guru had levied a regular tax he really deserved punishment. But this offence, although extremely serious, is not even mentioned by the Emperor in the TUZAK. It is hard to understand that the Emperor who was irritated at the Guru and used undignified language for him, did not care to record the most serious crime of the Guru. The fact, however, is that no Guru ever imposed any tax. Guru Amar Das, the third Guru, having realised the growing number of his followers and the difficulties of travel, had appointed 22 Masands (seats) in 1552 who ministered to the spiritual needs of the Sikhs at their different headquarters (Manjas) and whatever was offered or given to them in the name of the Guru was sent to the Guru at regular intervals. this system worked in the time of Guru Amar Das, the third Guru, and guru Ram Das, the fourth Guru. It is difficult to believe that the Government slept over it from 1552 to 1606 and did not consider it a crime and then suddenly realized that the Guru was collecting taxes. The Emperor's own words reveal that the Guru had captivated the hearts of thousands of Hindus and Muslims and yet it is a fact of life that taxes are never welcome.* It must have been a nazrana (offering) from the devoted disciples who according to the Emperor's own testimony, flocked to him from all directions. Another very remarkable fact is that even after the martyrdom of Guru Arjan Dev, the Masands kept collecting the offering until 1699 when Guru Gobind Singh discontinued the system and publicly punished some of the unscrupulous and dishonest Masands.

2. Interfering in the state affairs is another very serious and intolerable offence but little mention has been made of it by the Emperor or any contemporary writer, the only fact mentioned is that of helping prince Khusrau and applying a Tilak on his forehead. It has been (and still is) a tradition among the Sikhs right from the time of great Guru Nanak that whosoever comes to the Sikh Temple or the place of the Guru is offered free food and shelter. Although there is no written record, the Guru may well have let the prince take food from his kitchen when he was hotly pursued by the Royal Army. What else could the prince expect from the Guru and discuss with him when every second was valuable for him and he was racing against death? What wisdom there is for the Guru in applying tilak on the forehead of a prince who had already been defeated? How could the Tilak, which the Guru himself has strongly denounced in his writings, save the prince from disaster and put him on the throne? If the Guru really wanted to help the prince he could very easily ask the 'shoals Of people' coming to him to fight for the prince and that would have been wiser than merely applying Tilak on the head of so-called friend in distress, who had never met the Guru before.

The Emperor's account makes it. amply clear that even before Khusrau revolted, the Emperor was dead set against the Guru. He calls him an 'insignificant fellow' and yet his own words betray the fact that the Guru was the most popular religious leader and was visited by people of all faiths. His Writing leaves no doubt whatsoever that he was simply looking for an excuse to put a stop to the Guru's activities and the supposed meeting between the prince and the Guru provided this excuse.

The act of putting a mark on the prince's forehead was a sheer concoction or rumour coined and circulated by someone (probably Sheikh Ahmed, the Mujaddid) jealous of the Guru's growing popularity and respect. In the whole Sikh history there has been no occasion when the Gurus appointed any Sikh or non-sikh with such a mark. Emperor Akhbar was a friend of Guru Amar Das and he had also met Guru Arjan Dev and at the latter's request remitted 12 per cent land revenue of the Punjab but none of the Gurus honoured him with a mark. To 'convey preconceived things' to Khusrau, who had never before met the Guru, and also to honour him in the way no Guru had ever done is simply the figment of a conspirator's fertile imagination. Besides Guru Aryan Dev was not a politician and he had no grudge whatsoever against the Emperor who had been on the throne for hardly six months. The fact Is that the Emperor did not like the Guru and his influence and wanted to put an end to his activities and bring him into the fold of Islam. No other charge could be so incriminatory than to accuse the Guru of indulging in the most heretical Hindu act of putting a teeka (Qashka) on the forehead of a Muslim prince. The sad fact is that the Emperor did not even find it worthwhile to make an enquiry to establish the guilt of his father's trusted friend. He simply handed over the Guru to Murtza Khan* for execution under the law of Yasa.**