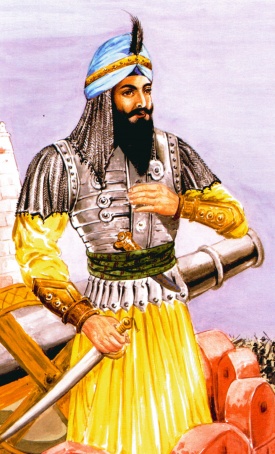 During the times of Sher-e-Panjab, Maharaja Ranjit Singh, the Sikh Raaj (kingdom) stretched from the Sutlej River to Kabul (in Afghanistan). Raja Ranjit Singh's key general was Sardar Hari Singh Nalwa, who was a Rehatvan (strictly observant) Sikh of the Guru.

Once, when Hari Singh Nalwa had set up camp with his army in Jamrud in Afghanistan, a local Muslim woman called 'Bano' had watched the Sikhs set up camp. She found Hari Singh Nalwa very handsome and attractive, and had the thought that the commander of the Sikhs would be a fine man by which to have a child, hopefully a son.

One day, Bano came to see the General who was sitting in his tent. When his guards told him that he had a local woman who wished to see him, not knowing who this lady was or what she wanted, Hari Singh gave permission for her to enter his tent. Bano said, "I have heard of the Sikhs. You are remarkable people. I have been watching you from a distance. I am not married and have no children, but I desire to have a son who is like you."

Hari Singh, not understanding the motivation or intention of Bano said, "May Waheguru bless you that you may have a son with the qualities of a Sikh." Bano irritably said, "No I want to have a son with you Sardar Ji."

Hari Singh Nalwa replied, "O sister! I am already married. I am sorry I cannot marry you or give you what you want."

Bano's eyes welled up with tears of disappointment. About to leave, she said, "I had heard your Guru Nanak was great and that no one leaves empty handed from Guru Nanak's House, but today I am being turned away without the wish of a son being fulfilled."

Hari Singh Nalwa, a true example of a Sikh of the Guru, replied, "It is true that no one goes empty handed from Guru Nanak's House. I cannot give you a son, but if you desire a son who is like me, then instead if you accept, from now on I will be your son, and I will consider you my mother."

Bano was shocked and overwhelmed by Hari Singh Nalwa's sincerity, high moral character and faith in the Guru. She said, "I had heard that Sikhs of the Guru are great honorable people, but today I have witnessed it with my own eyes".

From that day on Hari Singh Nalwa addressed Begum Bano as "Maa" (Mother) and she addressed Hari Singh as "Putar" (Son).

Naanak sohagan kaa ki-aa chihan hai andar sach mukh ujlaa khasmai maahi samaa-ay. ||1||
O Nanak, what is the character of the happy soul-bride? Within her, is Truth; her face is bright and radiant, and she is absorbed in her Lord and Master. ||1||

This article with thanks to: