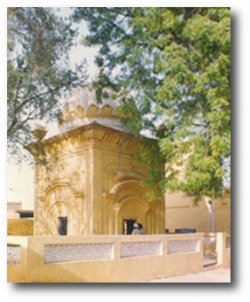 Gurdwara Patti Sahib also called Gurdwara Maulvi Patti Likhi (‘Patti’ means a wooden board on which children learn to write alphabets with a pen made of a soft stem. The board could be washed after the lesson and would be given another coating of soft light clay and is re-used) is located at the site where young Guru Nanak learned the various different languages mainly Persian and Arabic which were then used in the Punjab, each with its own distinct alphabet.

This sacred shrine lies midway between Gurdwara Janam Asthan and Gurdwara Bal Lilah along the road leading from Janam Asthan to the railway station in Nankana Sahib. The city has been renamed after its most famous native son Guru Nanak. Once known as the village of Talwandi the town is located in West Punjab, Pakistan.

The young male child is given a name

Born on the 15th of April 1469. Nanak was named after his elder sister Nanaki who was named so because of her being born at the house of her Nana (grandfather on mother's side) in the village of Dera Chahal in Lahore district. As a young child Guru Nanak Dev Ji first studied Punjabi with Pandit Gopal, then Sanskrit with Pandit Brij Lal and at 13 years of age he mastered Persian studying with Maulvi Kutab Ud Din. Hence Patti Sahib is also known as Gurdwara Maulvi Patti Sahib. 'Patti' means 'Alphabet'.

The divine wisdom of young Nanak

The divine wisdom and spiritual enlightment evident in the young Nanak became well known in his village when at the age of seven he astonished his teacher Pandit Gopal with his eloquence in explaining deeper truths about man and God and even composed an ancrostic on the Punjabi alphabet giving a divinely inspired interpretation to each letter.

He always spoke and sang of one God and his love for Him and being rich in music and melody he cast an irresistible spell on all those who listened to him. Guru Nanak while criticising the then prevalent methods of education, which of course meant no education for some, (particularly women and the lower castes) enlightened his teachers to the actual purpose of learning which gave a new meaning to each and every word. The Maulvis and the Pandits were quite ignorant of his new, revolutionary mode of teaching.

Composition in the holy Granth Sahib 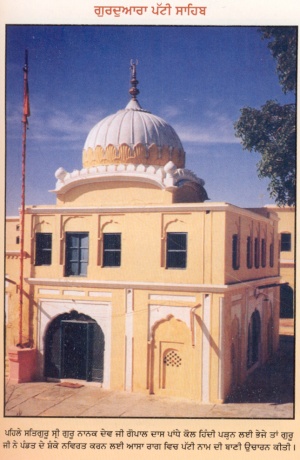 His composition in the Sri Guru Granth Sahib known as Patti was written especially to remove the suspicions and doubts in the minds of the Pandits. The very first stanza of Patti hymn says:

Sase soi srisht jin saaji Sabhana sahib ek bhaeya…
He who created all existence is the sole lord of all
Sevat rahe chit jin ka laagaa, Aaaya tin ka safal bhaeya.
Those who serve Him are his devotees, Fruitful is their coming into the world.

This Bani has been composed in the same way that was traditionally used to teach alphabets to children. It consisted of having rhymes with different line (sometimes paragraphs) starting with different alphabets which helped children in learning pronounciation, usage and other aspects of usage of this alphabet. Here Guru Nanak delivers his teaching to his own teacher in exactly the same manner the Pandit teacher was delivering to Guru Nanak!

The Sikh residents of Nankana Sahib, some 30 families in 2007 have been organising a regular recitation of Sri Guru Granth Sahib at this Gurdwara for the last few years. They were to have a lot of company in 2007.

Over 4,000 Sikh pilgrims from India have arrived in Pakistan to celebrate Guru Nanak's birth anniversary at Nankana Sahib amidst unprecedented security arrangements.

"Geographic boundaries cannot end the love, brotherhood and affection that Sikhs and Muslims share, " said a Sikh pilgrim on his arrival at Wagah. The pilgrims said Pakistan was not new to them as it is their ancestral land.

"We have come to pay homage to Guru Nanak Dev who has guided us to purity and sincerity," another pilgrim said after eating a meal at a langar or community kitchen.

Shiromani Gurdawara Prabhandhak Committee (SGPC) leader Sardar Amreek Singh Vocchoa said, "Pakistan is our second home. How can we be homesick while in Pakistan?"

Though many Gurdwaras in Pakistan are run down and in need of repair this Gurdwara is a vast and well maintained building.