From SikhiWiki
(Redirected from Gurdwara Pathar Sahib, Leh)
Jump to navigationJump to search 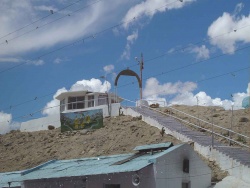 Gurdwara Pathar Sahib, is a beautiful Gurudwara sahib constructed in the memory of Guru Nanak, about 25 miles away from Leh, on the Leh-Kargil road, 12000 ft above sea level. The Gurdwara was built in 1517 to commemorate the visit to the Ladakh region of Guru Nanak Dev, the founder Guru of the Sikh faith.

During his lifetime Guru Nanak travelled to many distant places and one such place was Tibet. Guru Nanak is well respected by Tibetan Buddhists who consider him a saint; The Dalai Lama, spiritual leader of Buddhists in Tibet, has confirmed this in his discussions with some Sikh leaders saying that Tibetans revere Guru Nanak as a Buddhist saint under the name of Guru Gompka Maharaj. 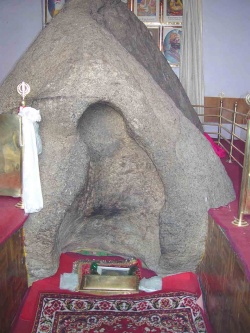 The Rock thrown by demon towards Guru Nanak

In the late 1970s, during the construction of the Leh-Nimu road, a large boulder was found by Lamas in the middle of the road bed covered with Buddhists prayer flags. The boulder was covered with Buddhist prayer flags, the type of flags that are often found, strung by Buddhist Lamas, along mountain ridges and peaks high in the Himalayas to bless the surrounding countryside.

The bulldozer driver tried to push the huge stone to the side, but it refused to move. Gunning the engine he pushed the powerful machine to its limits, but the boulder refused to give way. Suddenly, with a large snap, the blade broke and the work stopped. That night the driver had a dream in which a voice told him not to move the stone.

In the morning he narrated his dream to one of the army officers who guard the mountain passes of Ladakh. The soldier told him, not to give any importance to the dream. When all efforts to remove the boulder had failed, it was decided to blow it apart with dynamite the next day. That night the army officer also had a dream not to remove the stone. He too decided the dream should be ignored, but early that morning, being Sunday, he and the workers were visited by several Lamas and other Ladhakhis who came to tell them the story of a Holy Saint they called Nanak Lama and the unyielding boulder.

A bit of background

Listening they learned that the pathar the road crew had been having so much trouble with was a 'mould' with a negative impression, of their revered Lama Nanak that contained a hollow imprint of his shoulders, head and backside. He was told that during the period of 1515-18 when Guru Nanak was returning to Punjab through Srinagar, after travelling to Sikkim, Nepal and Tibet, he had rested at this place. It is believed that Guru Nanak Dev reached Leh via Sikkim, Nepal, Tibet and Yarkhand. Today the site and the Gurdwara that now covers the boulder is revered by both the local Lamas and Sikh sangat. Currently the Army is looking after the Gurdwara.

According to a local legend, once a wicked demon live in the area who terrorised the people where the gurdwara is now situated. The people prayed to the Almighty for help. It is said that Guru Nanak heard their woes and came to their aid. He settled down on the bank of the river below the hill where the wicked demon lived. The Guru blessed the people with sermons and became popular in the area. The locals called him Nanak Lama. Seeing this the demon got into a rage and decided to kill Guru Nanak Dev.

One morning when the Guru was sitting in meditation, the demon pushed a large pathar (boulder), down from the hilltop, with the intention of killing the Guru. The boulder gained speed as it rumbled down the hillside, but when it touched the Guru's body, it softened like warm wax and came to a halt against Guru Nanak's back. The Guru kept on meditating unhurt and undisturbed. Thinking that the Guru had been killed, the demon came down and was taken aback to see the Guru deep in meditation. In a fit of anger, he tried to push the boulder with his right foot, but as the pathar still had the softness of warm wax, his foot got embedded in it. Pulling his foot from the boulder the demon was dumfounded to see the impression his foot had just left in the stone. 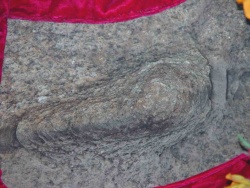 Footprint in the rock

On seeing this, the demon realised his own powerlessness in comparison to the spiritual power of the great Guru. He fell at the feet of Guru Nanak Dev and begged for forgiveness. Guru Sahib advised him to get rid of his wicked ways and asked him to lead a life of a noble person. This changed the life of the demon, who gave up evil deeds and started serving the people.

Guru Nanak Dev thereafter continued his holy journey towards Srinagar via Kargil. The pathar pushed down by the demon, with the imprint of the body of Guru Nanak Dev and the footprint of the demon, is at present on display in Gurdwara Pathar Sahib. It is said that since the visit of Guru Sahib (in 1517) to the building of the roadway in 1965, the local Lamas had held the pathar sacred and offered prayers to it as, no doubt, they do to this day.

To visit the gurdwara, one can take, a direct flight to Leh from New Delhi,JAMMU & SRINAGAR and stay in a hotel at Leh. To visit Leh by road there are two routes,one is via SRINAGAR {J&K} and the other is via MANALI{HP}.Both the roads are closed from November to May every year due to excessive snowfall and remain open from June to Oct. As Leh is located at a high altitude, one can have breathing problems due to the paucity of oxygen. Visitors are advised to consult their doctors and arrange proper woolen clothes before embarking on this journey as the temperature falls beyond -20 degree in Winter. The 25-km road from Leh to the Gurdwara Pathar Sahib is in good condition. Visitors can go by bus or taxi. The Gurdwara Sahib is located next to the main road near Magnetic Hill India.