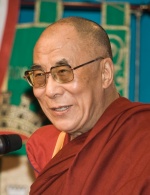 Dalai Lama, the spiritual leader of the Tibetan people is a close friend of the Sikhs. Often referred to simply as "His Holiness" (HH), or "His Holiness The Dalai Lama", Tibetans usually call the Dalai Lama by the epithets Gyalwa Rinpoche, meaning "Precious Victor", or Yishin Norbu, meaning "Wish-fulfilling Jewel." "Lama" (meaning "teacher") is a title given to many different ranks of Tibetan Buddhist clergy.

The Dalai Lama is believed to be the current incarnation of a long line of Tulkus, or Buddhist Masters, who have become exempt from the wheel of death and rebirth. These ascended masters have chosen of their own free will to be reborn to this place in order to teach humanity. He is also the leader of the Central Tibetan Administration, or CTA. He now lives as an exile in Northern India since Communist China invaded Tibet annexing in to China when the Dalai Lama was a young man.

Movies on his early years

Beijing officials, angry at the Hollywood glorification of the spiritual leader they call “a slave master,” have banned the films in China and temporarily halted business dealings with the three studios that made them.