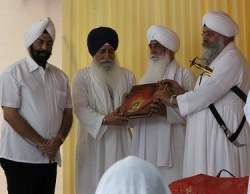 To celebrate Tercentenary of Gurta-gaddi, (ordination of Guru Granth Sahib as the Eternal Guru of the Sikhs) an international conference was held at Guru Gobind Singh Institute of Engineering & Technology from September 25th – 28th, 2008.

Speakers and scholars from all continents and countries such as USA, Canada, England, India, Pakistan, East Africa, Australia, Dubai, and Europe representing world religions including Hinduism, Islam, Buddhism, Judaism, Christianity, Baha’i and the Sikh Dharam participated. ‘They encouraged governments and civil societies to respect scriptures of all traditions’, said the conference convenor, Sukhbir Singh of England.

According to Dr. P.S. Pasricha, Chairman of Administrative Committee, Takhat Sachkhand Sri Hazur Sahib, Nanded / Coordinator, Gurtagaddi celebrations, 2008, ‘the purpose was to further promote interfaith dialogues, for developing greater insight of religious beliefs, as well as opening the door to the understanding of one’s neighbours’ religion’.

‘It is not an attempt for fusion of religions, but a quest to nurture an appreciation of similarities and to value the differences. Such initiatives will reduce global conflicts and promote peace’ said Bhai Sahib Mohinder Singh, Chairman, Guru Nanak Nishkam Sewak Jatha, UK.

‘This conference aimed to reach academics, spiritual leaders and civil society as a whole to build bridges in faith communities. To achieve these objectives will be the best tribute to the composers of the Guru Granth’s hymns’, said American scholar, Dr. Harbans Lal who is President of the Academy of Guru Granth studies.

This international conference was a prelude to a series of celebrations and conferences to be held throughout the world. Sri Hazur Sahib, Nanded will host the major celebrations at the end of October 2008 when Dr Manmohan Singh, the Prime Minister of India is expected to pay a visit to the city. Sikhs hope to reach the world audience about the messages of their Sacred scripture, Sri Guru Granth Sahib through this and similar other conferences.

His Holiness the Dalai Lama while commenting on the conference said that ‘religion should be used as basis for friendship, brotherhood and sisterhood. Active dialogue can lead to mutual enrichment of ethics and spiritual practice. We should encourage an increase in contacts among the followers of different religions and visits to each other’s places of pilgrimage and prayer.’

The conference also served as a pre-Parliament event for the next Council for the Parliament of the World Religions’ international conference to be held in Melbourne, Australia, in December 2009. Dr William Lesher, President of CPWR was the keynote speaker at the Nander confernce.

The four day conference concluded with unanimous adoption of the Hazure Sahib Declaration of the Guiding Principles for Civil Society based upon the Guru Granth philosophy as deliberated by over 50 scholars and religious leaders.

The Mayor of the City of Sri Hazur Sahib Nanded, Balwant Singh Gadiwale, invited all speakers and delegates for a reception and introduction to the City.There were evenings of sacred music and folk cultural presentations. The delegates were given a pilgrimage tour of Sikh Holy Shrines, as well as shrines of other religions.