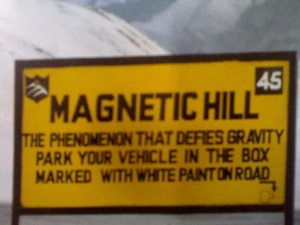 The first Guru of Sikhism Guru Nanak Dev ji sat on this place while returning from Tibet to Punjab via Kashmir. The question arises in the mind of everyone why Guru Nanak Dev ji had selected the place near magnetic hill for meditation. It is a well known fact that how much Guru Nanak was environment friendly. The Guru Nanak Tree in Leh city is a live example of it. It seems there is a hidden relation between Magnetic Hill and Gurudwara Pather Sahib. Every year a large number of tourists from all over the world visit at Magnetic Hill, all of them take Langer (meals) at Gurdwara Sahib.