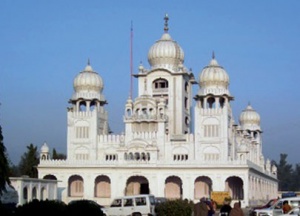 Gurdwara Patal Puri, This Gurdwara is situated at Kiratpur in district Rupnagar. It has been built on the banks of the river Sutlej and is situated across the railway tracks and is the place where many Sikhs take the ashes of their dead to be immersed in the river here. Guru Hargobind in 1644 as well as Guru Har Rai in 1661 were cremated here. The ashes of Guru Harkrishan were brought from Delhi and immersed here in 1664.

The Gurdwara is located in a large plot of land measuring over 1km square and houses a large darbar sahib with a langar hall located near by. A small sarovar is located near the toilet and shower facilities. A footbridge is located to connect the devotees to the bank of the river. Ample car parking space is available on the Gurdwara grounds. The main entrance to the Gurdwara is from behind the main building. Gardens and living rooms are located to the right of the main building.

Kiratpur Sahib situated on the banks of the river Satluj is the other important historical place in this District. This town was established by 6th Master, Guru Hargobind after buying Land from Raja Tara Chand of Kehloor through Baba Gurditta. It is said that Guru Nanak Dev made a prophesy regarding the establishment of this place. It is very near here that Guru Nanak Dev met saint Buddan Shah in what was then a jungle. Also at a place called Sheeshmahal which is close by that Guru Hargobind stayed from 1627 till the end came.

In 1675 Guru Gobind Singh at the age of nine received the tragic news that his father Guru Tegh Bahadur had been executed in Delhi. Guru Gobind Singh travelled from here to Anandpur Sahib for the cremation of his father's head which had been spirited away from Delhi by a devoted Sikh, Bhai Jaita.

A row of stalls line the road leading to the gurdwara. They sell interesting items like swords, daggers, staffs and steel crockery. Swords are priced at Rs 165. You have to bargain for a good deal. 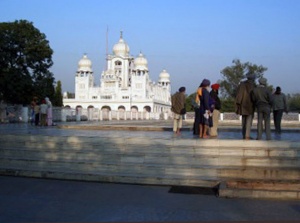 Kiratpur Sahib, January 11, 2005' Honouring his last wish, the ashes of Harbhajan Singh Yogi, who motivated thousands in the West to embrace the Sikh way of life, were today immersed in the Sutlej at Gurdwara Patalpuri Sahib here by members of his family. Hundreds of his followers from all over the world and a number of politicians were present on the occasion. Yogi died in Espanola, New Mexico, on October 6, last year (2004).

After a ‘path’ at Gurdwara Patalpuri Sahib, Yogi’s wife Inderjit Kaur, sons Ranbir Singh and Kulbir Singh and daughter Kamaljit Kaur, accompanied by Ms Preneet Kaur, MP from Patiala, Mr Tarlochan Singh, Chairman of the National Minority Commission, reached at the bank of the Sutlej around 2 pm. Yogi was paid tributes by Punjab Police personnel by reversing their arms. The ashes were immersed in the Sutlej from the temporary bridge over the river by his elder son, Ranbir Singh, at 2.15 pm.

The Deputy Chief Minister, Ms Rajinder Kaur Bhattal, and the president of the Punjab Pradesh Congress, Mr H.S. Hanspal, also reached there. An ‘ardas’ was made by Jathedar Tarlochan Singh of Takht Kesgarh Sahib.

Talking to The Tribune, Yogi’s wife Inderjit Kaur said, “Although Yogi had died, he would remain with us to guide in the work of spreading his teachings. The trust run by him will now be run by all of us.” Memorials to Yogi would be built in Punjab and various parts of the world, she added.

The chief of the Harbhajan Singh Yogi’s trust, Ms Niranjan Kaur, had come here along with hundreds of followers. She said Yogi was a source of inspiration for many. He guided thousands of people in the West to live peaceful life with the help of yoga, she added. 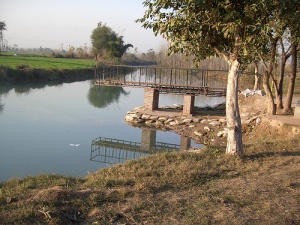 A shot of the over-hanging bridge over the river from where the ashes are immersed into the river.

ANANDPUR SAHIB, April 11, 2000 — The three-day programme, being organised by the SGPC in connection with the conclusion of the tercentenary celebrations of the birth of the Khalsa, began today with a “nagar kirtan” from Gurdwara Patalpuri Sahib, Kiratpur Sahib.

In the morning, Prof Manjit Singh performed ‘ardas’ heralding the beginning of the celebrations.

It was led by the ‘Panj Piaras’. Guru Granth Sahib was kept in a palinquin bedecked with flowers on a decorated vehicle.

During the ‘nagar kirtan’ from Kiratpur Sahib to Anandpur Sahib, ‘gatka’ players including-Nihangs, exhibited their skills. School bands and that of the Punjab Police were impressive. Nihangs could be seen on horseback. 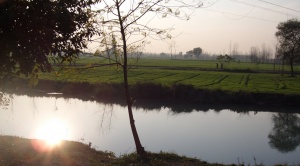 A tranquil and peaceful place where the many departed can rest in peace.

The ‘shastras’ (weapons) of Guru Gobind Singh, brought from Sri Anandpur Sahib, were put on display. The sound of ‘nagaras’ attracted the attention of many. A large number of students accompanied the ‘nagar kirtan’ carrying yellow and saffron flags. At least 20 policemen riding horses also took part in the ‘nagar kirtan’.

The participants used Sumos, cars, buses, trucks and autorickshaws up to the “welcome gate”, 5 km from Anandpur Sahib. They entered the city of bliss on foot. 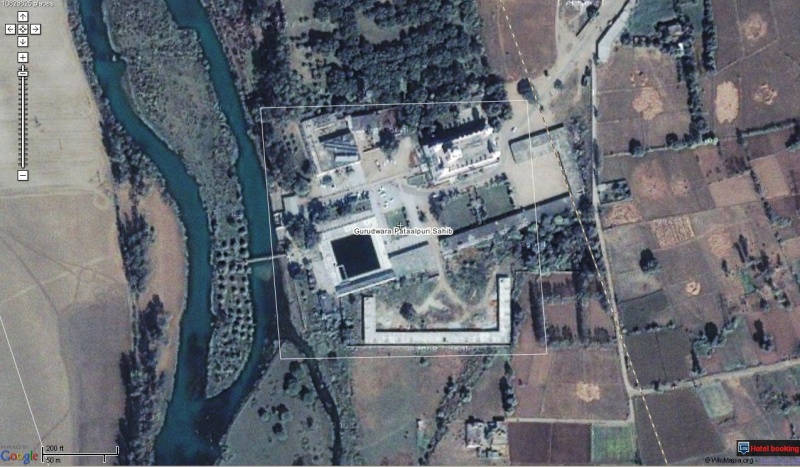