Rishi Kesh (also Hrishikesh and Rishikesh) is a city and a municipal board in Dehradun district in the Indian state of Uttaranchal. Hrishikesh (from Hrishikesh, another name for Lord Vishnu) is a holy city for Hindus located in the foothills of the Himalaya in northern India. It is also known as the gateway to Himalayas and it located about 25 kilometers away from another holy city, Haridwar, and is considered an access point for the cities that form the Char Dham - Badrinath, Kedarnath, Gangotri, and Yamunotri. Rishikesh also translates to mean - The land of the Rishis.

The sacred river Ganga (Ganges) flows through Hrishikesh. In fact, it is here that the river leaves the Shivalik mountains of the Himalayas, and flows out into the plains of northern India. Several temples, ancient as well as new, can be found along the banks of the river in Hrishikesh. The city attracts thousands of pilgrims and tourists each year, from within India, as well as from other countries. The city has several yoga centres that also attract tourists. It is believed that meditation in Hrishikesh brings one closer to attainment of salvation, or moksha, as does a dip in the holy river that flows through it. It is also becoming a hot spot for white water rafting enthusiasts, both from India and abroad, as it offers medium to rough rapids in the course of river Ganges.

The name Hrishikesh is loosely applied to an association of five distinct sections encompassing not only the town but also hamlets and settlements on both sides of the river Ganges. These include Hrishikesh itself, the commercial and communication hub; the sprawling suburban Muni-ki-Reti or the "sands of the sages"; Shivananda Nagar the home of Sivananda Ashram and the Divine Life Society founded by Swami Sivananda, north of Hrishikesh; the temple section of Lakshman Jhula, a little further north; and the assorted Ashrams around Swarg Ashram on the east bank. One can reach the famous Neelakanta Maha Deva Temple from here. The Ganga Arati performed at dusk at the Triveni Ghat is a spectacular sight not to be missed by visitors.

During the mid-1960s, The Beatles visited Maharishi Mahesh Yogi's ashram. Several other artists, including Mike Love of The Beach Boys and Donovan, visited the site to contemplate and meditate. More recently also, the place has been of interest to celebrities including Hollywood star Kate Winslet, who stayed in Peasant's Cottage while filming in the area. It seems modern Hrishikesh experiences little shortage of people travelling from all over the globe in pursuit of enlightenment. 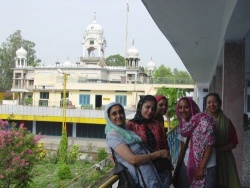 Back of Gurdwara Rishikesh with Smiling Devotees

The word Hrishikesh refers to Sri Krishna in the Bhagavad Gita where He refers to Himself as the "Lord of the Senses."

Gurdwara Rishikesh is also located here for the piligrimage of Yatra Hemkunt Sahib and Badrinath.

Some pilgrims also stay at Srinagar and visit the important historical places there. It is also said that the Gurdwara of Srinagar possesses two copies of handwritten Guru Granth Sahib. From Srinagar pilgrims set out for Joshi Math passing many beautiful places along the way. There also come many prayags on the way, where confluence of rivers presents beautiful scenery.