Raja Medini Prakash, ruler from 1684 to 1704 of Sirmur, a state situated along the river Yamuna in the Kayarda Dun valley of the Sivalik hills, was one among the hill chiefs who did not support Raja Bhim Chand of Kahlur in his designs against Guru Gobind Singh.

Raja Ratna Rai of Assam a disciple of the Guru Gobind Singh had given an Elephant and many valuable gifts to the Sikh Guru at Anandpur. A neighbouring hill-chief Raja Bhim Chand had grown envious of the Elephant and rich gifts and after several attempts to get them he finally resorted to suggesting the Guru send them as gifts for his son's coming wedding. As the Assamese ruler had requested that the gifts only be used by the Guru, Guru Gobind Singh refused to turn over the gifts and Bhim Chan soon resolved to take revenge on the Guru. All of this intrigue was interfering with the Guru's attemps at writing.

Raja Medini Prakash's Invitation and a Chance to Write

At about this time Raja Medini Prakash the Raja of Nahan seeking to end troubles with the Raja of Srinagar, Garhwal Phatshah who had taken over some villages belonging to him was advised that inviting such an illustrious guest as the Powerful Sikh Guru and gaining his blessings might peacefully induce Raja Garhwal Phatshah to return the land.

So in April 1685, he invited the Guru to spend some time with him at Nahan which had a cool climate, a beautiful river and abundant game should the Guru wish to hunt. Feeling the peaceful surrondings would be more condusive to his writing the Guru readily accepted the invitation and travelled to Nahan. As he reached the vicinity of the town (14 April 1685), Raja Medini Prakash, his court and citizens came out to receive him and took him to his palace looking after him and his Sikhs in a most hospitable manner.

Guru Gobind Singh remained in the Nahan territory for about three years and had a fort built at Paonta. Today the city is known as Paonta Sahib. It is an important religious spot for Sikhs and a bustling industrial town. It is a city sacred to the memory of Guru Gobind Singh. Paon means foot in Punjabi and the town which grew up around the fort is named the place where The 10th Guru once sat 'foot'. In Another version, the locals relate of the naming of the city and fort has the Guru loosing an ornament worn around his ankle called a 'poanta' while bathing in the River Yamuna. Paonta is about about 50kms from Dehradun.

The years spent at Paonta were the most creative and significant in the Guru's career. He enjoyed hunting in the surrounding thick forests where the opportunites were enormous. The Guru wrote, "I enjoyed myself on the banks of Yamuna and saw amusements of different kinds."

The Guru took many steps to beautify Paonta and devoted most of his time in composing poetry. He was so much enamoured of poetry that he invited fifty two poets to his court. The pleasant environment and salubrious climate refreshed his mind. Most of the time he spent in reading and writing. 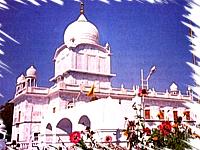 Here he composed the major portion of his Dasam Granth along the banks of the river. It is related that the roar of the mighty Yamuna was disturbing the Guru's writing so he requested the River to lessen its noise. The quietness of the river near Paonta Sahib is still noticeably calm.

While in the Sirmur territory, Guru Gobind Singh also fought and won the first battle of his life, the Battle of Bharigani 8 September 1688 (15 April 1688 according to some sources), fought against Raja Bhim Chand and his allies. Before he left for Anandpur Sahib, he appointed Bhai Bishan Singh to look after the fortress-like complex and the Gurdwara within it.

For his courtesy to Guru Gobind Singh and his refusal to participate in his fellow hill chiefs attacks on The Sikh Guru Raja Medini Prakash incurred the displeasure of both his fellow Hindu princes and the Mughal government.

After 20 years of rule Raja Medini Prakash died issueless in 1704.

The Rajas before and after Raja Medini Prakash