An oasis in a barren universe 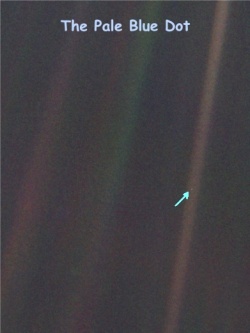 Can you find the pale blue dot? This is the planet earth! (click on the image to enlarge)

Is it not frightening to think that the earth is surrounded by a completely barren universe; for millions of miles in any direction, despite our best efforts over the last hundreds of years, nothing intelligent or living like the Earth has been observed.

You can travel in any direction in the 3 dimensional Universe away from Earth for many tens of years and it appears that you will find absolutely no living creature; finding intelligent human-like-creatures, at present, appears improbable. This observation appears to confirm that the Earth is surrounded by a barren Universe; a vast inhospitable desert with no living creatures. The earth is a minuscule dot of life in the barren vastness of the Universe.

Isn't it frightening to think that our present scientific knowledge can only confirm that there is no other intelligent living planet within the spectrum of our observable horizon comparable to mother Earth! We have looked hard and we have looked hard into the dark skies; we have looked with the biggest telescopes and we have spent many millions perhaps billions of dollars to seek, look, listen and observe; but we have found nothing.

Is Earth the only miracle of chance

Like it or not, the miracle of life appears to only exist here on Earth! Put in that form, one begins to understand the importance of this tiny blue planet. One can focus away from ones personal struggles and begin to appreciate the magnitude of this miracle; many trillions of hearts beat on this cosmic speck yet they can see no further than the end of their road.

Although the human eyes can see distant stars; the mind can compute the most complex mathematical equations; the human brain can invent complex devises like the atomic bomb - but in our everyday lives, we do not glance further or think deeper than the basic requirement of the human animal. We let our senses, our emotions and our instincts dictate the way we live.

The misery on the blue planet

Daily, we act and behave just like other animals governed by our animal instincts and our senses and neglect to utilise the real capacity of our minds and our God-given vision.

In so doing we have condemned humanity to the restriction of other animal species that exists on Earth. Just like other animals, humans suffer from starvation and hunger; millions of us perish every year without food despite our intelligence this trend still continues.

Akin to animals, our fellow humans suffer daily from medical aliments for which we have treatments; millions become blind because we cannot be so charitable so as to share our wealth to bring relief to these unfortunate peoples of the third world. Where does this so called human intelligence bring any benefits to the poor of the world?

Does intelligence help the planet?

Having this "superior intelligence" has man safeguarded this tiny haven of life, we call mother Earth? The answer has to be, a very loud "No". It is highly likely that mankind has done more damage to the Earth than all the other species put together! A space traveller observing the deeds of mankind from afar could be forgiven for labelling mankind as the destroyer of the planet.

What benefit does this higher intelligence bring to other species on Earth? Again, overall the answer has to be very little. Mankind is a selfish animal determined to satisfy his or her own needs at the complete disregard of others. As a race, the population of mankind has more than doubled every 30 years or so at the expense of the environment and other species, our fellow residents of the planet.

It is very likely that we consume the most resources of the planet and bring the least benefit to it! While most other species live in harmony with the planet, we cause the most damage; we fail to understand the need to like responsible "citizen" of the planet

Intelligence and clever tactics mean nothing

Intelligence and clever tactics for selfish gains has no benefit for the planet and bears no meaning in the spiritual environment. It is only thanks to the holy leaders of the world that complete anarchy has not resulted on Earth; these visionaries have injected some level of control and self-regulation into the human psyche and so we have a flicker of light for the human race.

Guru Granth Sahib states that, “There are planets, solar systems and galaxies. If one speaks of them, there is no limit, no end. There are worlds upon worlds of His Creation. As He commands, so they exist. He watches over all, and contemplating the creation, He rejoices. Nanak says, to describe this is as hard as steel!” (SGGS p8).

Despite this fact being clearly stated in the Guru Granth Sahib some 500 years ago, most of humanity is not aware of these sayings. Guru Nanak was an exceptional visionary and was responsible for bring some amazing ideas to the world.

The scriptures say that the universe consists of many different bodies including planets, solar systems galaxies, stars, suns, skies, etc and that the scale and extent of these bodies is unknown and that there is no end to their number. It is clear from this that probable size of the universe is beyond an exact evaluation or calculation by the human mind.

So it appears that as we get a better estimate of the size of the universe, in other words, the more we find, then the realisation will dawn that there remain even more outside our knowledge. Gurbani tells us that this is how we will progress when we try and calculate the size of the Universe. On a spiritual angle, the Guru tells us that the Lord is in his creation and the Creation is in the Lord; "All are in the One, and the One is in all." (SGGS p907). So the Universe is a manifestation of the Lord; He is found within the Universe. So from this we can see the extent of God as portrait by Sikhism.

Furthermore, it is stated that God created the whole universe including the earth: “You Yourself created the earth, and the two lamps of the sun and the moon” (SGGS p83); "He creates planets, solar systems and galaxies;" (SGGS p1162). And, “Many millions are the moons, suns and stars” (SGGS p275).