Durga is a feminine sanskrit term which is made from two words DURG + GAH, means one who wins the fort. It is also called Chandi(Feminine), Durgshah(Masculine), Devi(Feminine), Devta(Masculine), Siva(Feminine), Raam(Masculine) etc. In Gurmat Philosphy, Durga is Mind which having no Vices inside and which have all weapons of Wisdom in hand. This Durga fights with different Deamons inside(with vices) and outside(with Manmukhs). Durga is a feminine letter, which means BUDDHI.

When a person becomes Gurmukh, and he have all type of Wisdom in his hand, such person is called Durga. As it's feminine word so it denotes Mind(Buddhi) of that person which have that wisdom.

A Fact in Guru Granth Sahib

One Should Note Guru Sahib said there are Millions of Durga, but traditional belief say there is one Durga. Now there are very deep thoughts behind this line, it is said that there are millions of Durga. This cuts traditional belief first, but it generated a new belief. How millions? When someone read Guru Gobind Singh's bani(properly and logically), he will get clear with this fact easily. Others will just say that this line is against hindu etc etc. Secondly Durga is near to god thats why it is touching god's feet. So let's go behind thought.

1) Formless : In begging of Chandi Charitar Guru Gobind SIngh defined Durga in his own style, which was not defined in any of hindu granths. The formless is one of feature among first eight features of Durga = Chandi.

2) Genderless : There is no Gender of Durga, generally Hindu people say it's Lady, a female. They made many serials which are shown on televisions in india. Mostly Sikhs adopted such face of Durga and these type of cunfusions create confusions among Sikhs splitting it in pro dasam people and anti dasam people. Basically They interpret Chandi with Hindu Dictionary. Chandi is not any lady

3) can't get through idols : No where in Durga vars it is written that one can attain Chandi or Durga through idols. Idols were made by Hindus and Pundits and weaken the real meaning of Durga which was again explained by 10th Guru. Sikhs are not bound to idols, moreover Durga is formless, how could we make it's idol.

4) No Birth No Death : If Durga was really some person than she must born or die. Like Ramchandra born and so was others and died too. But Durga never born and nor dies. It kills vices and just became invisible.,when negative power overcomes it again come. How? 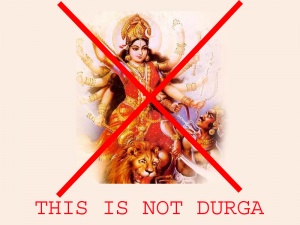 Durgah is Durg + Geh, means one who wins Fort.

This is FORT descibed in Gurmat. Which a person have to conquer.

Now this is Fort of Vices of Mann, how will one capture

Now the one who wins the Fort of Vices(Mann) is DURGA.

In Sadhsangat when our mind(Buddhi) will learn about god, such Buddhi is called Durga. It's feminine word for Buddhi. Every person which attain that stage is called DURGA

EVERY DEVOTEE IS DURGA

EVERY DEVOTEE IS DURGA

Nanak also said ਬਿਨ੝ ਪਉੜੀ ਗੜਿ ਕਿਉ ਚੜਉ ਗ੝ਰ ਹਰਿ ਧਿਆਨ ਨਿਹਾਲ ॥੨॥ i.e How can I climb up to the Fortress without a ladder? By meditating on the Lord, through the Guru, I am blessed and exalted. ||2||. To Become Durga one have to Meditate upon lord.