From SikhiWiki
(Redirected from Dholki)
Jump to navigationJump to search 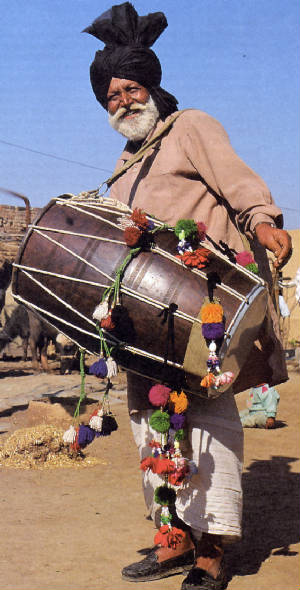 The dhol (Punjabi: ਢੋਲ) is a drum (a percussion musical instrument) widely used in India, usually the Punjab region, the Indian/Pakistani province of Punjab and Gujarat. North India, it was incorporated into Gujarati, Punjabi, Rajasthani, Somalian and other cultures from North India and abroad. Nowadays, it is very popular in modern Punjabi music played worlwide.

The dhol is a barrel shaped drum made of Hard Wood which is carved out of a single block from a tree trunk. Usually about 20-26 inches long, it is harnessed around the shoulders using a thick cotton belt. There are usually 3 types of Wood, used to make a Dhol:

The harder the Wood the Sharper, Louder and Clearer the sound.

Each side of the Dhol has Goat Skins covering the open ends, one for the bass and one for the treble. The skins are laced together with one piece of cotton rope threaded through the edges of both skins. This is the more authentic way.

The Modern day trend with Dhol's is to have a Plastic Western Drum Skin on the treble end, tensioned by metal nut adjusted hooks.

The dhol is a double-sided sided barrel drum (straight barrels also exist) played mostly as an accompanying instrument to the traditional Punjabi dance of Bhangra, the traditional dance of Gujarat, Raas, and the religious music of Sufism, Qawwali. In Qawwali music, the term dhol is used to describe a similar, but smaller drum used with the smaller tabla, as a replacement for the left hand tabla drum. The typical sizes of the drum vary slightly from region to region. In Punjab, the dhol has generally shrunk in size to fit the needs of the bhangra players who do energetic dances. In India and Pakistan, the dhol remains large and bulky to produce the preferred loud bass. The drum consists of a wooden barrel with animal hide stretched over its open ends, covering them completely. These skins can be stretched or loosened with a tightening mechanism made up of either interwoven ropes, or nuts and bolts. Tightening or loosening the skins subtly alters the pitch of the drum sound. The stretched skin on one of the ends is thicker and produces a deep, low frequency (higher bass) sound and the other thinner one produces a higher frequency sound. In contemporary Punjabi music, dhols with synthetic, or plastic, treble skins are very common. People who play dhol are called "Dhol Players" or "Dholis". There is also the Armenian Dhol. It is played with the hands. It is usually put between the legs to play or on the lap. The drummer just hits one side of the dhol. It is wider but shorter than the Indian Dhol.

The drum is played using two wooden sticks,usually made out of bamboo and cane wood. The most common rhythm played on the dhol is the Chaal, which consists of 8 beats per measure. The stick used to play the bass side of the drum is a bit thicker (roughly about 10 mm in diameter) and is bent in a quarter-circular arc on the end that strikes the drum, the dagga. The other stick is much thinner and flexible and used to play the higher note end of the drum, the thili. The drum is slung over the neck of the player with a strap usually made up of ropes or woven cloth. The surface of the wooden barrel is in some cases decorated with engraved or painted patterns.

Dhol was a popular musical instrument in both formal and informal dance performances for decades. Dhol players were once sought-after individuals for occasions of celebration, such as weddings, in India, but since the 1980s, the introduction of electronic devices such as tape recorders has led to a decline in their importance. Though formal Bhangra performances still involve traditional dhol, casual revelries are mostly carried out sans dhol. Nevertheless, dhol music still figures in the studio recordings of present day Raas/Garba and Bhangra music artists. The dhol is popular not only in North and West India and Pakistan, but is much-loved throughout India, Fiji, Trinidad, Guyana and the United Kingdom, Australia, Armenia and North America. A smaller cousin of the dhol is called dholak or dholki.