Sardar Captain Fateh Singh (1920-2017) was a Sikh armyman of the British Indian Army who fought in World War II and is Mentioned in Despatch holder. He was the born to a Labana Sikh (Ghotra) Family at Perowshah, District Gujrat, now in Pakistan. He resides in Loton,Distt Ambala,Haryana.

His father's name was Subedaar Chattar Singh and his mother was Mata Bholi Kaur and his grandfather was Sardar Sona Singh. He earned his lower middle school credits upto 4th standard from his village school. Sant Baba Prem Singh Ji was also a student of the same school as there was no school in his home village of Khori Duna Singh. He Joined Guru Gobind Singh Khalsa Lobana High School at Tanda(Pakistan) in 1933 and studied & Completed matric(10th) from there in 1938. He learnt the basic Punjabi, Hindi, Urdu, Roman Urdu & English.

His father Subedar Chatar Singh fought in World War I and got three generation jangi inaam and OBI. His elder Brother Sardar Nand Singh got IDSM and 1 Murabba of land. and joined Punjab regiment in 1914.

On 29 july 1940, he joined in 10/8th punjab regiment, Lahore. There were six groups of punjab regiments before partition 25% of the men were Sikhs,50% Muslims and 25% Hindus. Fateh Singh was posted after taking oath with fellow 33 labana sikhs in 2/8 punjab regiment.This regiment was placed at Chitral, near Tibet, where labana sikhs were posted due to a shortage of Jatt sikhs. During WW II., Chitral was also called Kala Pani (Black water). Capt Saab met prisoners there. He was posted to signal platoon hq company in which his friends sher singh(gujrat-pakistan) and joga singh gotpokar(gurdaspur) were also posted. He had passed Romanized Urdu, Map Reading and 1st class English in 1941. He was recommended by the Commanding Officer for the promotion of VCO.

Since 1935 he has recited gurbani. One day in a dream he saw his dead father with Guru Nanak Dev, at 3:00 am. Capt Saab had been worried a lot about house hold affairs and, in his dream, guru sahib gave him confidence that he should not worry as he would be promoted to the rankof VCO soon. and, truly, after 4 months he was promoted. When their C.O saw him he said, that he was too young to hold the job, looking through his files, he saw the name of Subedaar Chatar singh (his Dad), He commented that he was from a traditional Army family and he would fulfill all requirements and needs

Then capt sahib joined VCO at Jhansi training school. After VCO promotion, he was posted to IAOC at Jabalpur. in 1943, IAOC and EME seprated fropm each other. Then he was posted to 85 Mobile workshop at Poona. After 6 months his unit went on the move, crossing India from Poona to Patna Sahib, Haridwar, Tarveni, Calcuta, finally reaching Imphal. By then World War II was at full swing. The Japanese had conquered eastern Burma and occupied kohima and had surrounded the 33 corps of british army in june 1944. Japanese army had made Strong bunkers for defense.

His unit, 85 mobile workshop(IEME), was then at Palel. It was later moved from tumboo road to Burma and was placed at dweren fort(one of big forts of asia) in Mandalay which was the Headquaters of Burma in winter season and in summer memeyo was headquarter.

He was awarded MENTION IN DISPATCHES in war for his gallant and distinguished service at kohima. He along with 2 others, one NCO and one Sepoy were sent on a reconsence patrol by BDE/hq. On the patrol they engaged a superior Japanese patrol which they defeated; his gallant actions that day played a significant part in the patrols success. During WWII his batallion was under ghera of japnese at kohima from 23rd march 1944 to 13rd june 1944. Then World War II ended in 1945.

After War his unit moved to Shazanpur in UP. The Service selection board for commission selected him, due to reduction in army he was unable to avail the chance of commission. He left army on 4th aug 1947. During his service he had served nearly all 'Class A establishments'.

He Re-employed in 1949 as JCO in border scouts. He took over the charge of signal platoon in first scout battalion, there he did infantry signal course in 1949. Reorganization again took place in 1951 & converted MMG battalions. Three border battalions 4,5& 6 in addition to mahaar MMG battalion 1,2 & 3. A special course of MMG's was run by infantry college mhow. there he was selected as subedaar instructor in MMG division weapon wing at Mhow infantry college.

Before joining the college, he had served 7th Mahaar MMG battalion in china operation. His platoon MMG(medium Machine Gun) was given task to protect the Sela Hill and arrange the covering fire to protect fourth battalion of sikh LI. there the chinese firing killed his platoon hawaldar & some jawans. Even then Sela hill was not surrendered. When he was serving in fourth MMG battalion his platoon was at Kala Mor (Kargil) beyond daras & Yo Zila Pass. His platoon MMG was detailed cover the mocement of 101 bde & nine gorkha battalion at kargil.

He left the army in 1972 as a subedar major hon’ captain.

After completing 32 years of service, he joined Central Industrial Security forces in 1972 & served 10 years as an inspector and served as an instructor at CISF HQ and centre Hyderabad(AP), Dhanbad coal mines, Mumbai & Nangal, NFL.. Posted at CISF at Jharia, He solved various party disputes, theft cases, Resolved strikes of workers, Black of Coal. Etc. In Coal Mines Bihar he worked for more then a year and transferred to hyderabad then Mumbai then in national fertilizers limited in Nangal.

The total service on his part is 50 Years 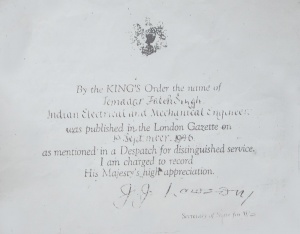 Mention In Despatches of Fateh Singh