When Romans met the Sikhs 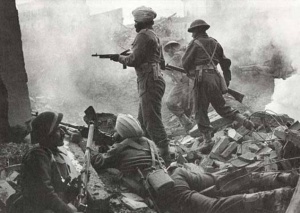 That morning in May 1999 I was on an official trip to Italy; as I had switched on the BBC World News, I had heard the announcement that Indian Air Force had started an offensive on the Kargil peaks and there were fears of a full-fledged war with Pakistan. What had till now been known as a minor incursion by infiltrators was now threatening to engulf the two nations into a suicidal war.

My friend and I had begun our usual tour of the fair; visiting booths of major companies. I vividly remember that stall, and the company owner sitting stylishly having a chat with his clients. These Italians sure are one stylish lot. Brown shoes and a red golf cap. I still haven't got over my bias for brown shoes acquired during those trips to Italy. 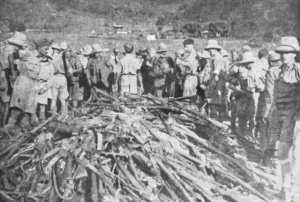 As we got on with our promotional lecture the conversation veered off to the Kargil news.

“Oh No!, you got it wrong”, said the Italian

“You know about Sikhs?”, he asked.

“Oh, are you?”, he remarked with a surprise, as he suddenly got up from his seat, took off his red cap, “Salute’”, he said in his strong Italian accent; even as he asked me as to why I was not wearing the Sikh turban. I grinned sheepishly in response.

“Hats off, my Sikh friend; you don’t know why Pakistan can never defeat India? It cannot defeat India as long as the Sikhs fight for India.”

We were surprised by his reaction. And we asked him as to how he knew about Sikhs and tried to find out the story behind his view.

The conversation gets more intense 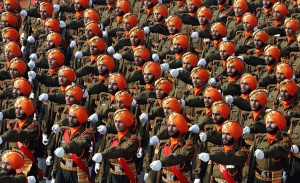 And then he started speaking animatedly. “My Grandpapa was in Mussolini’s army in World War-II. And he used to tell me a story. He told me that they were winning the war as they moved into Eastern Africa. They won many battles against the British. And then the British brought a regiment of fierce looking warriors. Men that looked like ferocious animals when in battle, the Sikhs. Their war-cry was so frightening that the Italian army used to shiver when it sounded. They attacked with their artillery; when they finished their artillery fire they attacked with their guns; when they finished their bullets they fought with bayonets; and when their bayonets were snatched they fought with knives; and then even as they were bleeding they fought with bare hands.”

I could see the Italian getting more and more excited as he recited the story. He was moving his hands around in the air and acting the part. “My Grandpa used to say that it was the Sikhs that turned the war around. They routed their enemy wherever they went.

“Finally, my Grandpa was captured by the Sikh regiment”, he said. “He was a Prisoner of War, with limited canteen. Even water was scarce. The Sikhs, the ferocious Sikhs that behaved like hungry lions on the field were like benevolent guardians in the camps. They slept hungry themselves but gave their food to the prisoners. They gave them so much respect and love that my Grandpapa used to say that he had never seen men like the Sikhs. So gallant in war and so gracious in victory.”

“As I grew up, my grandpapa inspired me with stories of Sikhs and asked me to meet some Sikhs if I wanted to be a man. So I went to meet Sikhs in India. I roamed in the Punjab, went to the temples and met many.”

“But, I wanted to see the Sikh Army in Action. So I went to your parade, that big parade in New Delhi, where all regiments of the Indian army march in glory. The parade was magnificent, the Indian army marching proudly, regiment after regiment.” he remarked as he took a book in his hand and moved it smoothly across the table in one straight line he said “this is how smoothly each regiment moved, like one unit”Sikh regiment contingent at Republic Day parade

“And then in the distance, I saw the Sikhs”, he said, as he started moving the book across the table. “Boom” he shouted as I saw the book go up an inch, “Boom”, as it went down, even as it moved across in one straight line and he did the entire stretch of the table. “This is how the Sikhs marched, boom, boom, moving like a storm across the road, so disciplined moving like one unit, yet looking so gallant and brave. I have seen the Germans marching, I have seen the march-past of the Russians, but I have never seen an army marching the way the Sikhs do.” He continued for a few more minutes with anecdotes of his grandpa’s and his interaction with Sikhs, as he hammered in the fact that Sikhs were the best fighting force in the world.

“So, my friend, you see. Pakistan can never defeat India, as long as the Sikhs fight for India.” 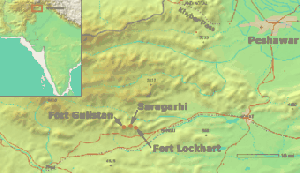 The map of the Nothwest Frontier Province

Obviously, those who know history of India and the subcontinent are familiar with the bravery of the Sikhs. In fact the battle that took place in north east in 1897 is recorded in the historical documents of the British parliament. Saragarhi is the incredible story of 21 men of the 36th Sikh Regiment (currently the 4th Sikh Regiment) who gave up their lives in devotion to their duty. This battle, like many others fought by the Sikhs, highlights the heroic action by a small detachment of Sikh soldiers against heavy odds. This encounter took place on 12 September 1897 in the Tirah region of North-West Frontier Province (now in Pakistan, which then formed part of British India). In keeping with the tradition of the Sikh Army, they fought to the death rather than surrender.

The Battle at Saragarhi is one of eight stories of collective bravery published by UNESCO (United Nations Educational, Scientific and Cultural Organization). It has been mentioned as one of the five most significant events of its kind in the world which includes the Battle of Thermopylae associated with the heroic stand of a small Greek force against the mighty Persian Army of Xerxes I in 480 B.C.

This incident has stayed with me for over fifteen years now, and I recount it today not in bravado as a fellow Sikh, but as something that needed to be told as an indicator of the impact Sikhs have on people, both in their bravery and in their graciousness; and as a reminder to us Indians.

Sikhs make up 10% of all ranks in the Indian Army, though Sikhs form only 2% of the Indian population.

After 1984, there was an experiment by Gen Vaidya to do away exclusivity, with a company each of Dogras, Garhwalis and South Indians in the Sikh Regiment. The exclusivity was however later restored.

I read an article today from the ‘Telegraph’ of UK that the Britishers were planning to create a ‘Sikh Regiment’ in the British Army.

Perhaps the Britishers know something we Indians seem to be forgetting.

The anthem of the Sikh Regiment