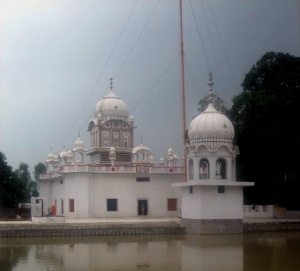 Gurdwara Toka Sahib is a wonderful gurdwara which has been established in honour of Guru Gobind Singh, who stayed here for a few days in 1685 and again in 1688. This Gurdwara Sahib is situated in the peaceful area of village Tota in Sirmaur district of Himachal Pradesh, at the border of Himachal Pradesh and Haryana. A road connects Toka Sahib with the city of Narayangarh (Haryana).

The natural surroundings of Gurdwara and the low population of the area make this a very peaceful and tranquil place. The Guru ka Langar (community kitchen) is available and food is served at most times. Another smaller Gurdwara called "Tapp Asthaan" is also built nearby where the Guru used to meditate in a solitary and peaceful location near the main Gurdwara Sahib. This is situated on a peak of nearby small hill.

Two Sikh soldiers who were wounded in the battle of Bhangani, died near Gurdwara Toka Sahib. A small Gurdwara is built as memorial to these brave soldiers on the bank of a Sarovar (pool).

Accounts tell of two visits by the Father of the Khalsa. 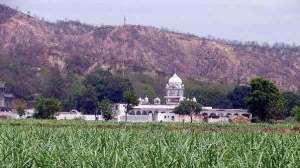 The majority of residents of village Toka were ‘Rangharhs’ (thieves). They got a chance to enter the camp of Guru Gobind Rai Ji’s army managing to steal away with two camels.

When the Sikh soldiers discovered that the camels were missing, they informed Guru Gobind Rai. The Guru asked the ‘Rangharhs’ of the village about the camels. The villagers said they did not take any camel. They said, “Other thieves must have stolen your camels. We have not seen your camels”.

They then went back to their village.

There was (and there still is) another village, named ‘Laaha’ at some distance from village Toka. Today, Laaha is situated on Narayangarh-Raipur Rani road. Majority of its residents were poor people. The Guru called them to his camp and asked them if they would go to the Rangharhs’ village disguised as beggars to check if the Guru's camels were in the village.

Now, Guru Ji called the ‘Rangharhs’ of village ‘Toka’ again. ‘Rangharhs’ were now frightened because their crime was highlighted and proved. They apologized to the Guru.

The Guru said, “The residents of village ‘Laaha’ will always get ‘Laaha’ (profit) and residents of ‘Toka’ will face ‘Tota’ (loss)”. 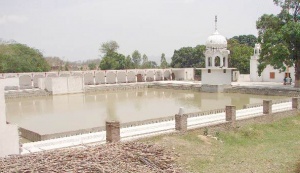 Two Sikh soldiers who were wounded in the battle of Bhangani, died here. A small building of a Gurdwara is built as their memorial on the bank of ‘Sarovar’ (pond).

Darbar Sahib:
Sometime ago the Gurdwara Sahib consisted of a modest flat roofed surrounded by a verandah. There was a hut of a Nihang which took care of the shrine. Now there is a big hall as Toka Sahib. A Management trust was framed which now controls the ceremonies & working of Gurdwaras. There is a huge congregation on days related to Guru Gobind Singh & other Gurus too. The sangat visits here around the Year from all corners filling the area around the Gurdwara with trucks, tractors, vans and other vehicles. To reach the shrine one has to cross the Roon River. The Darbar Sahib has been constructed on the foothill. 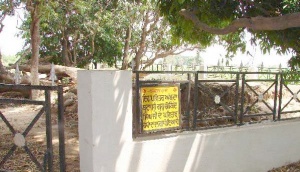 There is a old sacred Mango tree present behind the Darbar sahib complex. According to early sources, it was said, that, after eating a Mango, Guru jee threw away the seed which soon took root and grew into a small Mango plant that today has grown into a Big Mango tree with branches laid down over the ground. But know it is said that it was planted by the Guru himself.

Black Berry Tree:
When Guru jee stayed over here he used to tie the horses with Small hooks of Blackberry tree. Still there are two huge Blackberry trees over there from that time. 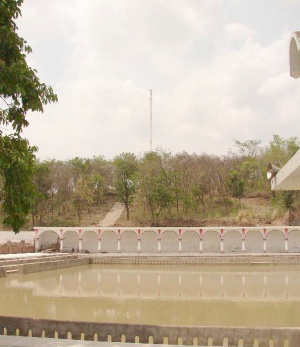 This is an another Gurdwara which is a few meters away and located above small hill and under the boundry of Gurudwara Toka Shaib. It is said that Guru Gobind Singh jee after bathing in river Roon combed his hair. This is also the Tap Asthaan of Guru Gobind Singh. There is a Bridal path to go there, but one can go only on foot. Distance is just of 100 to 150 meters. Another Gurdwara is built where Guru Ji used to meditate in a solitary and peaceful place near the main Gurdwara Sahib.

Neem Tree:
The Sacred Neem tree is present there which is of Gurus time, it is said while brushing with neem twig guru when throw the twig away in soil. The twig became a Neem tree.

Old Well:
There is an old well here which, according to an inscription, was dug in 1823 "in memory of Maharaja Ranjit Singh and Nawab Fateh Singh Ahluwalia."

Old Bamboos:
Guru Gobind Singh Jee after combing hair dugged the hair which remained with Kanga. From that hair Bamboos grow up there.

Yaadgaar Shahidan:
Two Sikh soldiers who were wounded in the battle of Bhangani, died here. A small building of a Gurdwara is built as their memorial on the bank of ‘Sarovar’ (pond).

Now there is a Sarovar Sahib, a big Langar hall, a Gobar Gas Plant and road (from Ferozpur over River Roon) made under the tenure of Captain Fateh Singh. The village of ‘Toka’ still exists. Because the Gurdwara is built on village Toka’s land, it is named as ‘Gurdwara Toka Sahib’. The ‘Guru Ka Langar’ (community kitchen) is available. 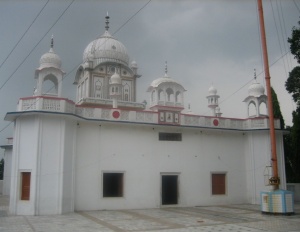 The Gurdwara is located in Sirmur District of Himachal Pradesh, but the nearest village Tota, about one kilometre to the southeast, is in Ambala District of Haryana. From Mianpur you have to cross the river called Roon to reach there. It is approximately 20 Km's from Naraingarh.