From SikhiWiki
(Redirected from Bhatt Salh)
Jump to navigationJump to search 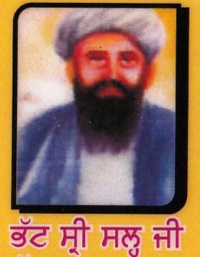 Bhatt Salh(Pa: ਸਲ੝ਯ੝ਯ ਕਵਿ, Hi:सलढ़य कवि), pronounced as sall-eya, a Devotee Bard and mystic, whose three Swaiyas are incorporated in Adi Granth, was protagonist of Gurmat Philosophy. He did preachings of Gurmat during his lifetime. He was brother of Devotee Bard Salh, whose hymn is also present in Adi Granth, which means he was from Gurmukh/Vedic Family. Not much is known about his History. In his 3 hymns, he explained the way soul could control its internal vices and move forward through the path of Dharma with results such soul will get. He also admired and explained that how Satgur Amar Dass and Satgur Ramm Das carry across to other side of world. His three hymns covered the whole Gurmat philosophy in brief.

Bhatt Salh solved various questions of Gurmat in His Bani which could bring the mindset of reader accurately under Gurmat Thought. Following is questions which could be easily solved through bani of Bhatt Salh:

In Gurmat Philosphy, as explained by Satgur Salh, Demon is a state of Soul in which his thoughts takes him away from Truth. All such thoughts, ideas or Human having such idea is called a Demon. It could be a Keshadhari Like a Sikh or Could be Saffron Colored Hindu dressed or Muslim with Green Color Dress. Attachment(Moh) is quality of Demon. As it is demonitic quality so It is also attributed as Demon because this keeps person tangle with temporal world and relation and forget to move forward in spiritual world. Bhatt Salh mentioned two times about this demon. Desire(Kaam) is other quality of Demon. Desires should be one which should necessary for Body or for Soul. Extreme Desires just for body is not at all recommended by Devotees. More Desires lead to attachment with Temporal things and soul will get away from his main mission. Such soul will never able to get the true throne and eternal Kingship. Sexual desire is a part of Kaam. Anger is third demon. It do not let soul to remain attach with itself. It declines spiritual growth as well as affects body. In Anger the person speaks rubbish which is not Gurmat thought as Gurmat says one to speak through intellect. Greed is also one of demons which if sticks to soul, it remain tangle in money and world. There is relation between these demons as get from Bhatt Salh.

Of these, one Swaiya is in praise of the 3id Guru and two Swaiyas are in praise of the 4th Guru. According to Bhatt Salh, the Gurus had attained the spiritual height through meditation, dedication and devotion. They had captured a victory over the worldly desires by controlling their mind. They had subjugated the evils like passion, anger, greed, ego and lust and were perfect examples of contentment, after acquiring the boon of Nam.

You are the True Master, throughout the Four Ages, As the Lord's Light is dwelling in your heart.

From the beginning of the world, the angels, heavenly laodies, Seekers and the true followers,

You are the Primal Lord, from time in memory of man, And it is you who have upheld all the three worlds. You are the saviour of the Vedas.

You have mastered the circle of births and deaths.

Guru Amardas has established you as liberator of the world, And now, you ferry across the ocean, one and all.

Says Salh the Bhatt, "You are the only one, the liberator and dispeller of sins".