From SikhiWiki
(Redirected from Bhatt Harbans)
Jump to navigationJump to search 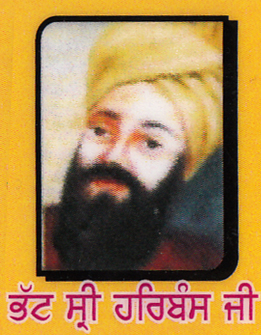 Bhatt Haribans, a Bard, whose uttered Sacred Hymns are present in Adi Guru Granth Sahib, was a great Devotee, who understood the true way, in company of Satgur Arjun Dev. He attained the same seat as of Guru Arjun Dev and Mentioned in Hymns, which he received from Dhur, the way, how Guru Arjun Dev attained Liberation/Discovered Supreme Power.

He is also "Satgur" for Intellectuals/Gurmukhs, though name of all bards come under title ""bani bhattan ki"", so "Bhatt" word is commonly used for them by people. His hymns are present at end of all compositions of Bards.

In History, Haribans the ascetic, known for his tapas, i.e. renunciation and meditation, who accepted the Sikh faith at the hands of Guru Arjan, was head of the Sikh dharamsälã at Agra. According to Bhãi Mani Siñgh, Sikhãñ di Bhagat Mala, he served with devotion and humility the travellers who came to his dharamsälã. He would feed them, wash their feet with warm water, and massage their bodies to relieve them of fatigue. He would recite Gurbãni in the morning.

Professor Sahib Singh claims him to be believer in Ganga.

There are only two Swaiyas available, authored by Bhatt Haribans. He had the privilege of witnessing the celestial congregations of the 4th and 5th Gurus. According to him Guru Arjun Dev was bestowed the throne by Akal Purkh, Himself and the canopy under which he sat was guarded by angel's and Heavenly bodies. A number of Brahmas and Vyasas type people marked their attendance in his divine court, they sat in the Sadh Sangat and were busy writing the Ved(Gyan). Bhatt Haribans was a man of letters and had intimate knowledge of the mythic culture of India.

Everlasting is the flow and unconquered are the waves of the Guru's Ganga,
Where all the devotees bathe.
The Puranas have sung his praises,
And Brahma chants his glory, through Vedas
There waves the royar whisk over his head,
And he recites, ever the Nectar Name of God.
The Lord, Himself is holding the holy canopy over him.
Nanak, Angad, Amardas and Ramdas have submerged in the Eternal Light.
Who says they are no more?
Harivansh hails the glory of the Guru, Eternal and Everlasting.
Their essence is imbued in the whole world. (1)